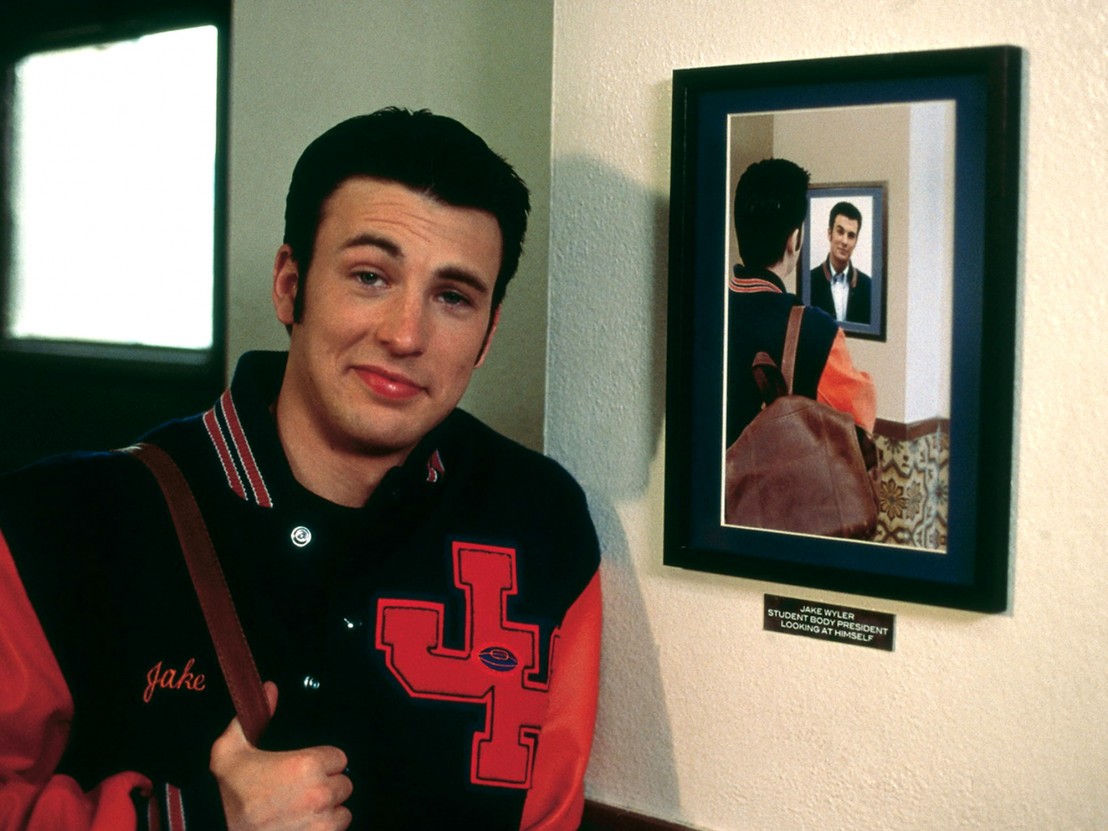 The last 10 years have seen Chris Evans become one of the most famous movie stars in the world, but the ungodly box office success he’s enjoyed as a cog in the Marvel machine amounts to little more than a gilded consolation prize for a career that peaked as it soon as it began. Fortunately for Evans, he doesn’t seem to know that.

In a recent interview with the Wrap, Evans was asked to reflect on Not Another Teen Movie, the 2001 comedy that provided his big break. Self-deprecating but careful not to sound ungrateful, Evans laughed at the thought of his first leading role: “The movie had me stick a banana in my ass, it wasn’t exactly some highbrow art.”

Both parts of that statement are at least partially false. In the scene to which he refers, a gender-swapped parody of Ali Larter’s iconic “whipped cream bikini” from Varsity Blues, the banana appears to be affixed to his ass, not lodged in it. Also — and more importantly — Not Another Teen Movie may not be highbrow, but it is most definitely art.

Stop lying to us, Chris. Stop lying… to yourself.

Not Another Teen Movie is a fucking masterpiece.

Spoofs, by their very nature, are always looking at the past over their shoulder. Their humour appeals to audiences of the present by tracing an ironic distance between them and the absurdities that they used to accept at face value. Satire has always been how culture sheds its skin, and parodies are an integral part of film history thanks to their unique ability to help us forgive ourselves for the silliness that we once took seriously.

An indulgently sharp send-up of the hormonal epics that helped shape the ’90s (and the John Hughes classics that helped shape them), Joel Gallen’s Not Another Teen Movie was shot in the early days of 2001 but not unleashed into theatres until December of that year. The content of the film may not have been affected by 9/11, but the grim timing of its release helps to clarify what makes it special, and nearly the last of its kind (Gallen’s next directorial effort would be a TV special called America: A Tribute to Heroes).

Working from a blithely solipsistic premise that seemed like an echo from a more insular time, and approaching it with a degree of ironic detachment that wouldn’t become commonplace until a few years later, Not Another Teen Movie doesn’t just mock the tropes that made the ’90s such a golden age of teen rom-coms, it also exhibits a very real interest in understanding their value. As with so many other great things, it begins with 1999’s She’s All That, the Platonic Ideal of high school caste comedies.

Not Another Teen Movie leans into the fact that the films it’s mocking are already absurd, that awareness allowing its best gags to land with the silly dimensions of an inbred MC Escher drawing. Not since the rewind scene in Spaceballs has a spoof so gleefully called attention to its tangled relationship with the target of its jokes.

That meta streak colours every inch of the film, from the football jerseys labeled “Extra,” to the facetious blasts of generic rock music that fill even the briefest transitions between scenes. But it’s Gallen’s casting that stares deepest into the looking glass: Molly Ringwald’s late-game cameo as a wise flight attendant is just the tip of the iceberg in a film that also includes the late Paul Gleason stepping back into his disciplinarian role from The Breakfast Club, and – most pivotally – Ron Lester reprising his part as Varsity Blues’ tragicomic Billy Bob, his Reggie Ray virtually identical to the obese, concussion-prone football player he played in that po-faced teen drama.

Not Another Teen Movie is fetishistically dense with hilarious details, and one of its best is the school’s stadium scoreboard, in which a counter has been installed to keep track of the concussions Reggie has left before he dies. It’s one of four different jokes that can be found in the same cutaway shot, and it’s a gag that sets up this immortal exchange between the head coach (Ed Lauter) and his assistant (H Jon Benjamin) following Reggie’s latest injury:

Coach: Can he play?

Assistant: He’s in a coma.

Coach: Answer my question! Can. He. Play?

Assistant: I don’t even think he can breathe!

Mike Bender, Adam Jay Epstein, Andrew Jacobson, Phil Beauman, and Buddy Johnson’s script (whew!) loves to make subtext text, and text into giant signs. The invisible truths that backbone high school life are foregrounded until they become the stuff at the surface. “This is not your typical high school,” the orientation guide (Josh Radnor, in his finest performance) tells a crop of new students as he leads them around the campus on the first day of class. “Here at John Hughes… you’re accepted for who you are, not for who you hang out with.”

In the background, a banner on the outside of the building reads: “Welcome, prospective cliques.” It’s a throwaway joke in a film that’s stitched together from throwaway jokes, but as the beefier boys of the group fall into formation (their letterman jackets spelling out J-O-C-K-S), Not Another Teen Movie effectively conflates the shorthand of high school social groups with the comforts and limitations of narrative genres.

The characters are constantly identifying themselves (“I’m just the token black guy”), but the world is so lucidly codified that their pronouncements are redundant. We know who these people are before they have the chance to tell us, in part because the immaculate cast always lets you know that they’re in on the joke.

Evans displays the kind of comic timing that money can’t buy, a lesson that Marvel had to learn the hard way (Joss Whedon had two whole movies to catch that kind of lightning in a bottle, and he still couldn’t match the genius of Jake Wyler’s aside about a Mexican finger painter). He’s the ultimate WASP in a place so full of them that the high school has adopted the insect as its mascot (their winged logo adorned with a sweater tied around its fibrous little neck).

Elsewhere, Eric Christian Olsen nails the vacuous arrogance that made Paul Walker’s early characters into such winsomely harmless jerks (“Whoa, I didn’t say anything about a bet”), Mia Kirshner slightly adjusts the volume on Sarah Michelle Gellar’s Cruel Intentions sexpot until she becomes the ghoulish distortion of a male teen fantasy, and Randy Quaid – playing Janey’s father as an alcoholic Vietnam vet with PTSD – almost certainly didn’t know he was in this movie until he started receiving his SAG residuals a few years later.

Gallen got his actors to commit to their parts with an intensity that would make Daniel Day-Lewis blush (or it would, had Day-Lewis not played the plastic bag that stars in the uncharacteristically contrived American Beauty joke). Thanks to the immediacy of the performances, a movie spoofing a story about the upward mobility of a disgusting teenage wildebeest (“She’s got glasses and a ponytail!”) becomes a biting satire about the rigidity of social roles. Even Jake’s desperate last-minute dash to stop Janey at the airport is locked into a scripted social protocol that no one has the power to break. Here’s how Jake explains things to Ricky Lipman, the best friend who’s been in front of Janey’s face the whole time:

Ricky: I’m the best friend, and I have been in front of her face the whole time, and she just… hasn’t really realised it yet, but she will.

Jake: Well, I’m the reformed cool guy, who’s learned the error of his ways. She’s gonna forgive me for my mistakes, and realise that I really love her.

It’s enough to evoke the bit in Robin Hood: Men in Tights when everyone has to consult their scripts during the archery contest to confirm that Robin gets another shot. In Roger Ebert’s otherwise unfortunate review of Not Another Teen Movie, he wrote that the film was like, “The soup that heats itself.” That’s exactly what spoofs were all about before the Friedberg and Seltzer nightmare factory turned them into a random assembly line of decomposing pop culture references. Not Another Teen Movie recognises what Meet the Spartans, Vampires Suck, and all the rest did not: its mere existence is the only pop culture reference that it needs.

An effective parody will put a moratorium on a form of filmmaking, and the best of them will find a way to lovingly eulogise the same tropes that once brought their audience some joy. Not Another Teen Movie may have been titled in order to sound like a threat, but it lingers like a promise. After Gallen’s film, there couldn’t be another teen movie. Yes, there would be many more movies about teens, and most of them would adopt some of the same tropes that Gallen had already lampooned and laid to rest.

But Mean Girls, Easy A, The Duff, and the rest of their millennial ilk would be irrevocably distanced from the films that paved their way, picking at the scraps that Not Another Teen Movie had left behind. Whatever their other virtues, all of those comedies were left with no choice but to explicitly address the anthropology of high school, cornered into running down the clock on a generation that had seen itself in the mirror and could never forget the sight of its own reflection.

And now the moment every popular guy who’s made a bet to turn a rebellious girl into prom queen has been waiting for: 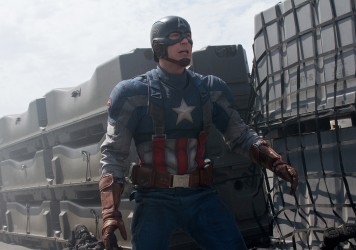