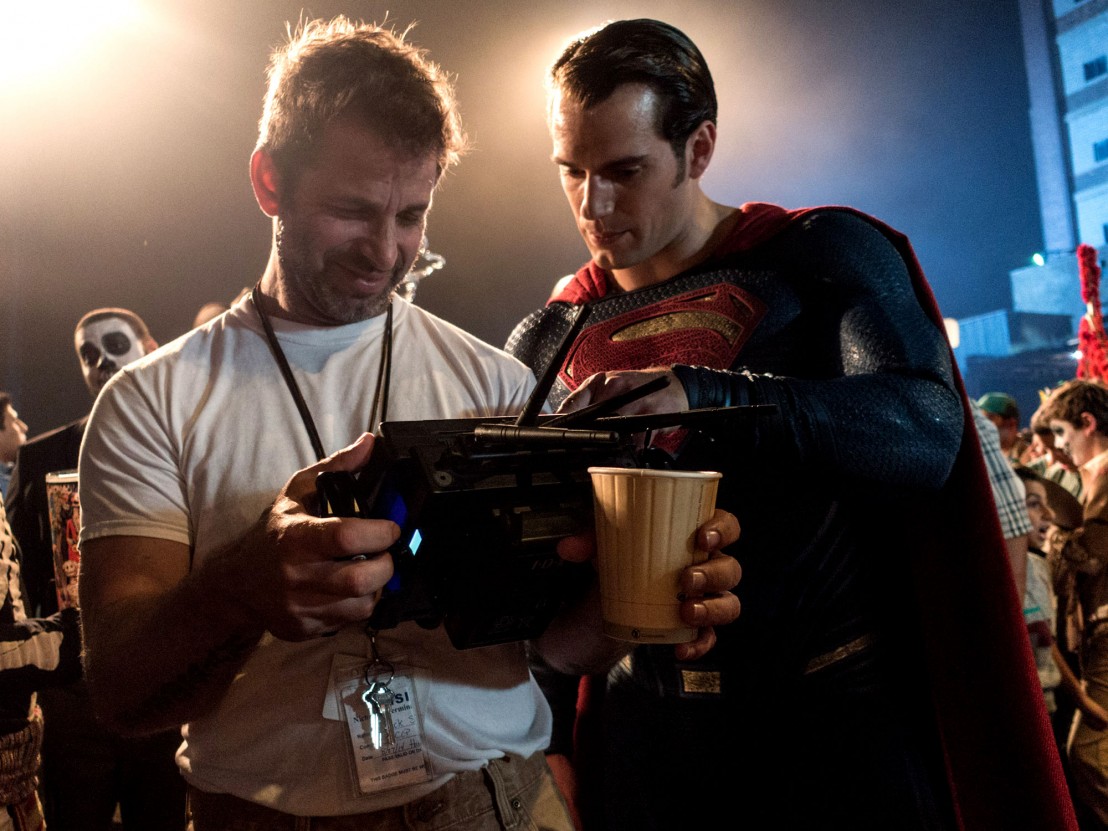 Drop a cat out of a window and chances are it’ll land on its feet. Drop a piece of toast on the floor and it’ll probably land butter-side down. Now hold that thought for a second. Zack Snyder is an American filmmaker who, as house director to Warner Bros, has been handed his own key to the Hollywood toybox. Yet Snyder doesn’t churn out the kind of demographic-tooled “product” that’s usually the financial lifeblood of a major Hollywood studio. It’s clear from his films that he’s a man with interests and passions. Someone, somewhere, likes Zack Snyder. Commercially, he’s a cat. You can drop him from insane heights and he’ll saunter from the scene without so much as an insouciant lick of a crumpled paw. Critically though – and there’s no nice way of putting this – Snyder is toast.

You only need to place a few frames of film on the lightbox to neatly encapsulate Snyder’s cinematic world. It all comes back to the iconic sequence in Martin Scorsese’s Raging Bull in which De Niro’s Jake LaMotta is on the ropes, having his face pummelled in slow motion by Johnny Barnes’ Sugar Ray Robinson. There’s a direct homage to the moment in the opening scenes of Watchmen as down-at-heel avenger The Comedian is similarly beaten about the head by a masked assailant.

But it’s not just the choreography of the shot which suffuses Snyder’s work: it’s the horrific arcs of gore and suppurating wounds presented in microscopic detail; it’s the physicality and dance-like qualities of hand-to-hand combat; it’s switching between immense, complex panoramas and near-imperceptible moments of suffering. The maximal and the minimal existing in the same space at the same time.

After commercials (Budweiser, Miller Lite) and music videos (Morrissey, My Chemical Romance), Snyder cut his directorial teeth on the fleshy neck of a classic horror remake, delivering a digitally enhanced riff on George A Romero’s zombie-based takedown of blind consumerism, Dawn of the Dead. His historical siege movie 300 marked the point where Snyder became a paid-up member of the blockbuster fraternity.

He was then entrusted with an unfathomably risky property in the form of Watchmen, Alan Moore’s late-’80s graphic novel which deconstructed superhero mythology by boldly re-imagining an American atomic era shaped by violent masked vigilantes. Purportedly “unfilmmable”, it had stumped six studios and four directors for 20 years. But not Snyder.

The ornamental blood-letting was eliminated (albeit not entirely) for his detour into kiddie town with anthropomorphic 3D animation Legend of the Guardians: The Owls of Ga’Hoole. Finally he gave the destructive, washboard-stomached machismo of 300 a female-fronted opposite in 2011’s upskirt insanity aria Sucker Punch. It was pitched as “Alice in Wonderland with machine guns” and flouted Warner’s rumoured “no female leads” policy.

Whatever your thoughts on Snyder, the release of Batman V Superman: Dawn of Justice, a film which has every possibility of strong-arming its way into the upper echelons of box office glory, demands we look closer at the director’s body of work. The single narrative motif which links his five features is the idea of the few banding together to defeat the many. On paper, Dawn of the Dead and 300 actually tell the exact same story: a small group of people – newly minted soldiers of fortune – are warned of encroaching hoards and then wade into a messy and usually futile showdown. Politically, one might even read Snyder’s work as espousing Ayn Rand’s philosophy of objectivism, in which the self-interests of a minority are placed above the needs of the masses. 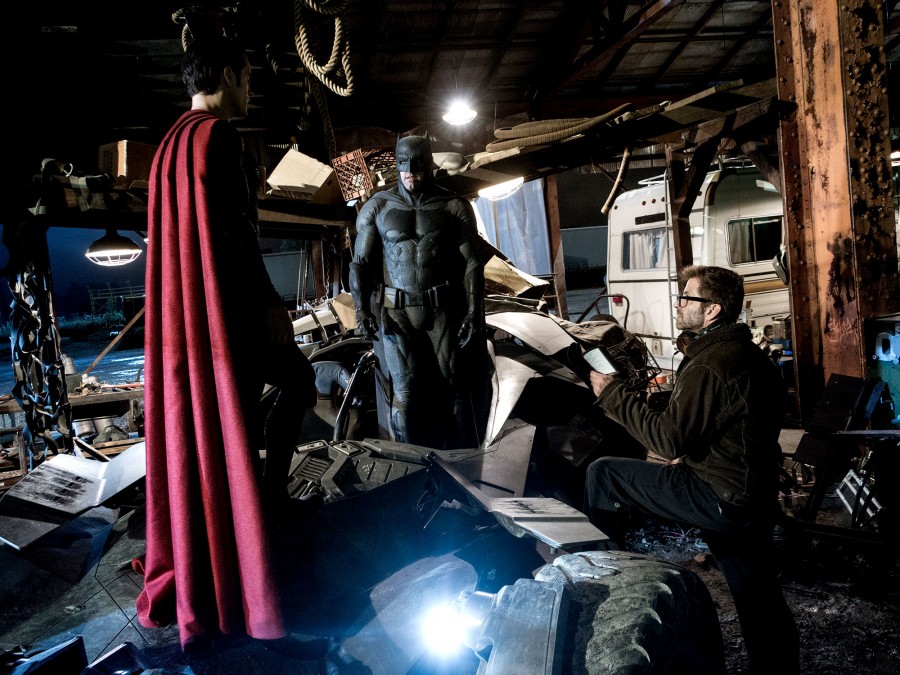 From the brilliant opening scenes of Dawn of the Dead, in which actress Sarah Polley escapes her suburban hamlet as it’s ravaged by the living-impaired (amusingly, they’re never called zombies), it’s obvious how much Snyder enjoys stylising and framing simple actions. We flip between a POV shot inside a car with a bloodied windscreen to a panoramic bird’s-eye view of the road. We watch from above as a car spectacularly careens into a barn. Snyder is a director of extreme tendencies. Visually, there’s no middle ground. In 300, it’s either a breathtaking scene in which a fleet of galleons sway precariously on troubled tides or the path of a broadsword as it pierces enemy flesh. In Sucker Punch, it’s either the airship-scattered amphitheatre of some fantasy steampunk blitzkrieg or the snowflake that melts on Emily Browning’s eyelash.

Entire worlds are built from scratch in Snyder’s cinema and these worlds usually carry as much dramatic heft as the human protagonists. The mind’s eye skirmishes of Sucker Punch – extraordinary visions of Japanese battlebots, dragon mothers and clockwork German stormtroopers – act as a self-referential nod to the director’s love of constructing rich, immersive landscapes. Beyond the human cliques which receive a special focus, Snyder also like to paint with people. In 300 and Dawn of the Dead, he marshals epic, swirling masses of bodies into the cramped frame. These stylistic precedents hark back to the silent era, to Griffith, De Mille and von Stroheim. Snyder’s maximal sensibility plus the way he naturally gravitates towards the grotesque also recall the quasi-surreal frescoes of Brueghel and Hieronymus Bosch.

Examining the manner in which Snyder sells his own films is a business for which face-palming was invented. In reaction to the accusations that 300 operated as neo-fascistic propaganda, Snyder simply shrugged off all who deigned to extract subtext from this worryingly ornate war opus. Critic Mark Cousins described it as “feral and Rumsfeldian”, combining the corporeal monstrosity of Tod Browning’s Freaks with the gaudy psychosexual overtones of William Friedkin’s Cruising. The Italian fascist party Alleanza Nazionale even co-opted the film’s imagery in their marketing materials.Conversely, Slovenian pop philosopher Slavoj Žižek argued that the peculiar nature of this battle made it impossible to draw contemporary parallels. But according to Snyder, it was just “a bunch of guys stomping the snot out of each other” – a rare case of a filmmaker actually attempting to suppress the subtexts of his own work.

Had Snyder not been so cosily diplomatic in the assessment of his films, there’s every chance 300 may have escaped its trial by fire. Paul Verhoeven knew exactly how to overcome the lefty naysayers when he released Starship Troopers in 1997. Instead of taking the fascistic tone of the source material at face value, Verhoeven delivered the film as an ironic takedown of cultural imperialism and the triumphalism of warfare. If Snyder had transferred his energies to thinking about what he was saying rather than how he was going to say it, 300 may have stood as a sharp and bombastically stylised treatise on race-hate and masculinity through the ages.

Alongside directors such as Michael Bay, Neveldine & Taylor and Tony Scott, Snyder could be termed a “vulgar auteur”, someone who retains an aesthetic continuity across an identifiable canon of work, but who makes genre films aimed at a mass audience. “The sun’s always on the horizon, no matter what time of day it is,” he says of his stylised realities.

Does Snyder project himself into his own characters? It would be unfair to see him as plucky Barn Owl Soren from Legend of the Guardians, who slowly learns to fly and finally defeats an enclave of evil slaveholding owls. Maybe he’s Babydoll from Sucker Punch, living in the paradise of his own dreams? No, Snyder is Dr Manhattan. He’s the melancholy, blue-skinned deity from Watchmen who holds the fate of humanity in his hands. His audience doesn’t know whether to love him or hate him, can’t decide if he’s God or the Devil. He’s the embodiment of immense power and this power feeds his imagination. It’s his gift. His curse.

This article was originally published in LWLies 47: the Man of Steel issue.