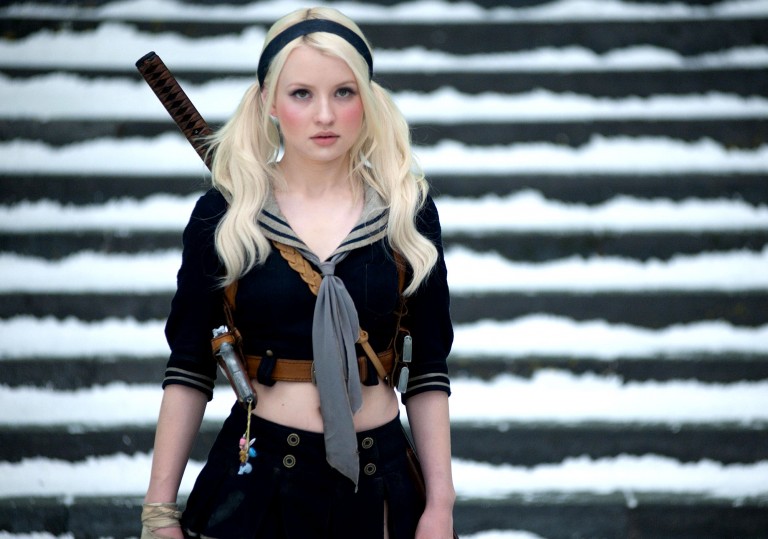 Zack Snyder’s Dawn of the Dead and Watchmen were reasonably well received.

Incoherent, dunderheaded, excruciating and generally unpleasant – not a redeeming quality in sight.

Have we already found the worst film of the year?

Those who have seen Sucker Punch’s trailer, or indeed Zack Snyder’s previous slow-mo action offering, 300, may not have high hopes for his latest – but this astonishing travesty manages to limbo under the lowest of low expectations. An intensely cynical mash-up of a movie, Sucker Punch is acutely troubling and about as empowered as a late night lap dance.

It opens in music video mode with our protagonist’s violent, sexually abusive back-story and newly orphaned status cursorily and callously imparted. After an altercation with her step-father, during which her younger sister is killed, our – as yet unnamed – protagonist (Emily Browning) is interned in a formidable Vermont mental institution called Lennox House.

Faced with the threat of lobotomisation, we see her apparently retreat into fantasy, inexplicably reimagining her surroundings as a sleazy, high-security brothel where smoky-eyed gamines are forced to ‘entertain’ the clients of their boss and master, Blue (Oscar Isaac).

Newly-monikered dancer-cum-hooker Babydoll turns out to be a surprisingly seditious inmate – surprising not least because Browning’s performance betrays not one ounce of rebellious spark. She formulates a spectacularly half-baked escape plan, assisted by a clutch of her fellow captives, including Sweet Pea (Abbie Cornish) and Rocket (Jena Malone).

The omnipresent and often realised threat of sexual violence is set to a series of pumping (and predictable) tunes. It’s a film which asks you bemoan the girls’ subjection and imprisonment whilst simultaneously leering at them. The fact that this is a mainstream effort, neatly served up within the film’s 12A certificate is deeply unsettling – this is glamorised sexual servitude presented as fun for the whole family.

Sucker Punch is Snyder’s first attempt at developing material from scratch and, as the co-writer and director, it’s impossible not to lay the blame squarely at his door.

It’s hard to feel anything but sympathy for the actors when the material is so obnoxious and anaemic; that the wonderful Abbie Cornish and Jon Hamm are present – albeit in body only – serves as a constant reminder that you could be watching something better.

Its aggressive, expensive marketing campaign will ensure bums-on-seats, but don’t make the mistake of making them yours. Snyder’s first original film is a stinker of such grandiose proportions that it will take weeks to get rid of its stubborn, wretched odour.

Zack Snyder’s Dawn of the Dead and Watchmen were reasonably well received.

Incoherent, dunderheaded, excruciating and generally unpleasant – not a redeeming quality in sight.

Have we already found the worst film of the year?