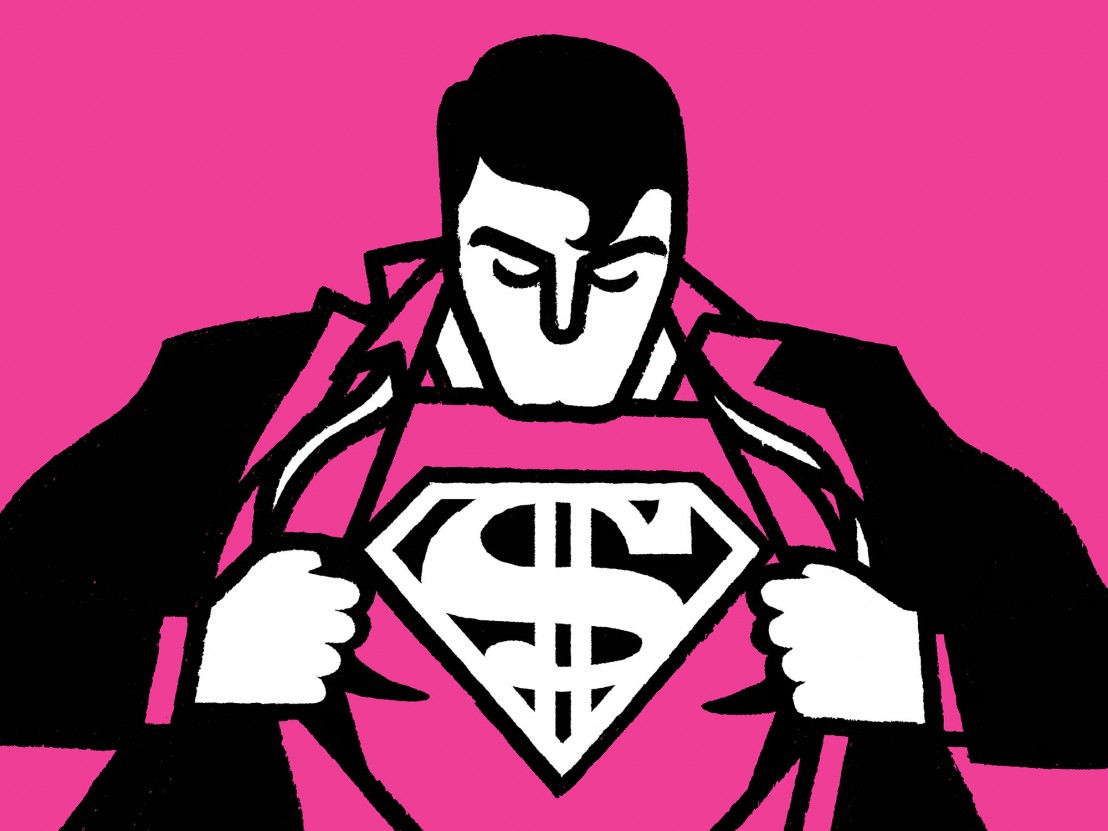 America is between Gulf Wars, Bill Clinton is in the White House, Tony Blair is still dreaming of Number 10 and superhero blockbusters that don’t have a bat in them are box-office cyanide. It’s the mid-’90s and 32-year-old American writer Michael Chabon (pronounced, as he says, “Shea as in Shea Stadium, Bon as in Jovi”) publishes his second novel, ‘Wonder Boys’.

While his tale of a college professor with writer’s block becomes a critically successful movie, Chabon begins the hunt for ideas for his next book. It’s a search that takes him into his own past, and the past of one of his childhood heroes, as something long-forgotten catches his eye. “I had a box left over from my childhood,” remembers Chabon. “It was taped shut and it just went with me from place to place. I untaped it and the smell of old comic books wafted out. It just triggered something.”

As a child, Chabon was a comic-book geek. His grandfather had been a typographer at a plant where comic-books were printed and little Michael inherited bags of them. At age 10, he had decided to establish a comic-book club, renting a room for $25 and placing advertisements in newspapers. Only one kid showed up. But now, it all came back to him. Chabon had already been thinking of writing a story set in the middle years of the 20th century – his Brooklyn-born dad had filled his head with tales of the era’s movies, radio shows, books and music since he was a child – but as he breathed in the old comics he realised that what he wanted to do most of all was combine the two. Cram in the period detail, yes, but marry it to the story of two young men trying to make their way in the rough-and-tumble early years of American comics.

For inspiration, Chabon looked to the real lives of the men who created so many of his favourite characters. Men like Jack ‘The King’ Kirby, Stan Lee and Will Eisner. But most of all to the writer and artist team responsible for creating (“In Cleveland on this one hot night in 1936,” as Chabon put it) the greatest American superhero of them all: Superman.

The story of Jerry Siegel and Joe Shuster is the most inspiring and most depressing in the history of the comic-book industry. They were 16-year-old students when they met in 1930 and each instantly recognised a soul mate (“When Joe and I first met, it was like the right chemicals coming together,” said Siegel years later). Almost immediately, they began batting around comic-book ideas, dreaming up characters like supernatural crimefighter Dr Occult and swashbuckling adventurer Henri Duvall.

By the mid-’30s, their work was regularly being featured in publications like New Fun and Detective Comics, but the pair struggled to find a home for one of their most cherished creations – a blue-and-red-clad alien with super-strength and the ability to leap tall buildings in a single bound. They had been honing the “Superman” idea for a few years, but no one would take it. Finally, a year before Hitler marched into Poland to give the world its great supervillain, National Allied Publications (later to become DC Comics) made Superman the cover story in issue one of their new Action Comics. For Kal-El, it was up, up and away. For Siegel and Shuster, it was the start of a long and bitter war.

In order to get the character published, they had signed a 10-year contract to provide Superman stories for National Allied. But to get that contract, they had also agreed to sell the rights to the character. The sum they were given for a property soon to be worth billions? A mere $130.

Nearing the end of their deal and bitterly unhappy about the tiny crumb of the vast Superman pie they’d been given, Siegel and Shuster sued National Allied over the rights. They eventually lost the court case, only gaining $94,000 from National Allied by agreeing not to pursue the matter further. In the aftermath, the comic-book company removed Siegel and Shuster’s byline from their comics. No longer would they be identified as the creators of Superman. They’d been written out of comic-book history.

For the next 30 years, Siegel odd-jobbed his way around the comic-book industry as a writer for hire, while Shuster’s deteriorating eyesight eventually forced him out of illustrating and into a life of near destitution. It was only in the late ’70s, with the release of the first Superman film starring Christopher Reeve looming, that their names were reinstated on the comics after Siegel launched a publicity campaign openly shaming DC Comics for the way he and Shuster had been treated.

By the time Chabon opened that box of comics and inhaled, Siegel would be just months away from his last breath and Shuster was already dead. But the more Chabon read about them, the more their story lived on with him. “It just all came together,” he recalled. “I said, ‘I’m going to write a novel about two Golden Age comic-book creators.’ [Siegel and Shuster] created this character who, 70 years later, is still very much with us and yet they saw very little of its success themselves. It was the combination of wild imagination, male partnership, popular art and commercial failure that resonated and got me started.”

In the spectacular opening chapters of Chabon’s epic book, ‘The Amazing Adventures of Kavalier & Clay’, 19-year-old artist Josef Kavalier smuggles himself out of Nazi-occupied Prague in 1939 and ends up “slumped like a question mark against the door frame” in the Brooklyn bedroom of his cousin Sam Clay. Together they invent a Houdini-like superhero called The Escapist who “vows to free all who toil in chains.” While their superhero batters Hitler in their pages, Joe desperately struggles to rescue his family from Fascism and Sam discovers his own shackles.

Gently inspired by the triumph and tragedy of Siegel and Shuster, it begins with the basic tale of two comic creators squeezed out of the rights to their creation, but spins into the worlds of stage magic and Judaism, sexuality and survivor’s guilt, art and money, Salvador Dalí and Orson Welles, love and redemption, history and fiction. It might have been an unholy mess. But Chabon’s novel is gloriously well-written, afraid to spin pages-long yarns inside parentheses or slalom the reader down breathtakingly constructed sentences that never throw us off. “I discovered strengths I had hoped that I possessed – the ability to pull off multiple points of view, historical settings, the passage of years – but which had never been tested before,” said Chabon.

It was, as promised, amazing. When ‘The Amazing Adventures of Kavalier & Clay’ was published in 2000, the reviews flooded in like love letters. It won the 2001 Pulitzer Prize for fiction. Bret Easton Ellis declared the novel “one of the three great books of my generation.” And it has gone on to become one of the most read and most loved of modern American novels. In a postmodern twist, there have even been comics starring The Escapist. But there’s one obstacle that Chabon and his magnum opus haven’t managed to leap in a single bound: turning the book into a film. Not for want of trying. The rights were sold before the novel had even been published, with Wonder Boys producer Scott Rudin snapping them up for Paramount Pictures. He hired Chabon to write the script, a process of chopping, condensing and brow-furrowing that by 2002 had seen the author plough through eight drafts in 16 months.

In a weird reversal, as Chabon tried to snip scenes from his 600-page novel, Rudin tried to put them back in. “It’s like those arcade games where a gopher head pops out,” said Chabon at the time. “I fix this and then another head pops out.” Development rumbled on, with first Sydney Pollack and then Extremely Loud And Incredibly Close director Stephen Daldry in the frame to direct. Jude Law’s name was stapled to it for a while in 2005 as casting rumours started to buzz. Tobey Maguire as Sam Clay. Jamie Bell as Joe Kavalier. Natalie Portman as Rosa Saks. Andrew Garfield, Ryan Gosling, Ben Whishaw, Jason Schwartzman. “It buzzed very seriously for about 11 minutes,” said Chabon. “Then it went away.”

The project continued in development for another 18 months after that, with Rudin even commissioning test-reels illustrating how The Escapist’s comic-book battles could be integrated with live action (Google: ‘Rudin Kavalier and Clay test’). But in 2006, the studio put the project into turnaround. Paramount may simply have decided what many commentators had long claimed: that the book was unfilmable. Chabon once said that the biggest connection between Kavalier and Clay’s fictional adventures and the real-life story of Jerry Siegel and Joe Shuster was that both were ultimately stories of “success followed by failure.”

But hope hasn’t quite died completely. A year ago, Daldry openly discussed the idea of an HBO miniseries. And when Benedict Cumberbatch was recently asked what his dream project would be, he answered immediately: “There’s a very good book called ‘Kavalier & Clay’…”

This article was originally published in LWLies 47: the Man of Steel issue.