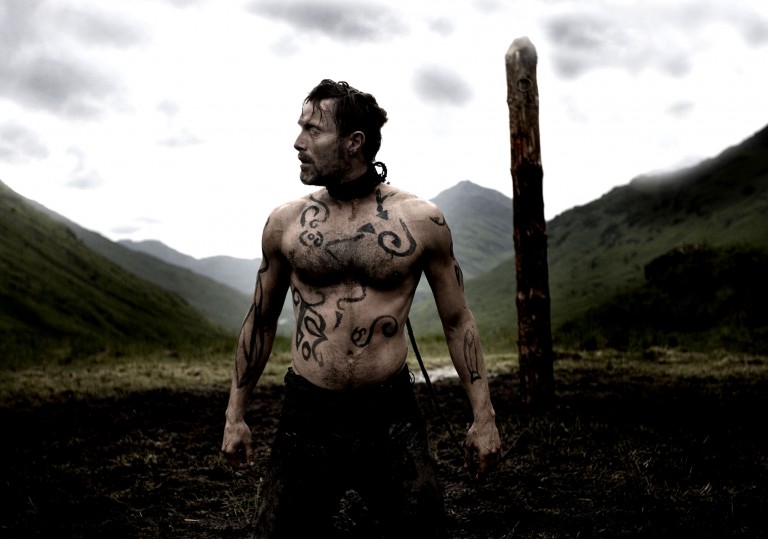 Where are we? What’s happening?

The weirdest scenes here will stay with you for years. An admirable folly.

Valhalla Rising’s problem is that it’s easy to think of it as just a pretentious sword-and-sorcery film.

You could call this fog-bound journey into a Nordic heart of darkness Nicolas Winding Refn’s Apocalypse Now. Except that it was shot for pennies in a digitally desaturated Scotland; sets its tale of doomed Western imperialism among Viking Christians in America; and requires a mighty effort to get to grips with whatever Refn may really be up to beneath its grunting violence and stark mood.

Mads Mikkelsen’s One-Eye is a chained, mute slave pitted against a pagan chief’s rivals in primordial battles that are more cock-fights than gladiatorial duels. With the help of Are (Maarten Stevenson), a frightened blond boy who is the film’s lone spark of innocence, he escapes to take up with Christian Vikings who sail for the Crusades but, adrift in yellow mist, end at the other pagan end of the world, North America.

The pulpy Vikings versus indians flick this could have been is ignored, the inhabitants of this alien land remaining invisible, hostile presences in the forest until they finally appear as motionless, prehistoric red warriors on the horizon. Even here, any expectation that One-Eye’s Viking Samurai killing machine will carve his way through them are quickly dashed.

The Scorsese-style extreme violence of Pusher and Bleeder, the oppressively brilliant Copenhagen street movies that made Refn’s name, is confined to early vein-geysering duels. One-Eye’s magical way with axe and knife nods instead to Asian action cinema and spaghetti westerns: he’s Refn’s Man With No Name.

Just as his last film, Bronson, dodged expectations of a straight, brutal biopic of ‘Britain’s most violent prisoner’ to surreally and sympathetically play with Bronson’s own myth-making, so Refn sails further out here. The still, fog-shrouded waters in which the Vikings are lost – a limbo or tunnel funnelling them into America’s bright green hell – may represent Refn himself, feeling his way into uncharted directorial territory, setting out just to see what he might find.

Valhalla Rising’s problem is that it’s easy to watch it and think all he’s found is a pretentious sword-and-sorcery film. Like the acid-inspired cult comic-books of Grant Morrison, you either buy into the subterranean labyrinths of symbolic meaning, or you don’t. The sheer strangeness of the Vikings’ voyage through a medieval Twilight Zone, the naturalistic creak of sails, timber and clothes in this lost world, and the low pulse of Peter Peter and Peter Kyed’s Carpenter-esque score certainly grow in atmosphere.

And Mikkelsen’s heroically impassive performance becomes suddenly moving when you register how his automaton movements gain a humane urgency when he decides to save the boy from the unpleasant fate America has waiting for its first visitors. But Refn’s elliptically framed approach to a story that functions more like a dream doesn’t get any more intelligible.

Giving in to this trip is finally more fun than hollering at it to make more sense. Large parts of it don’t work. But it’s a brave, transitional work by a fine director feeling his way towards something new without much caring if he fails.

Where are we? What’s happening?

The weirdest scenes here will stay with you for years. An admirable folly. 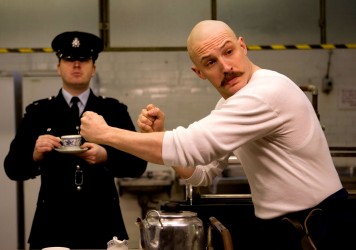 Tom Hardy delivers a knockout performance as Britain’s most notorious convict in this bruising psychodrama.