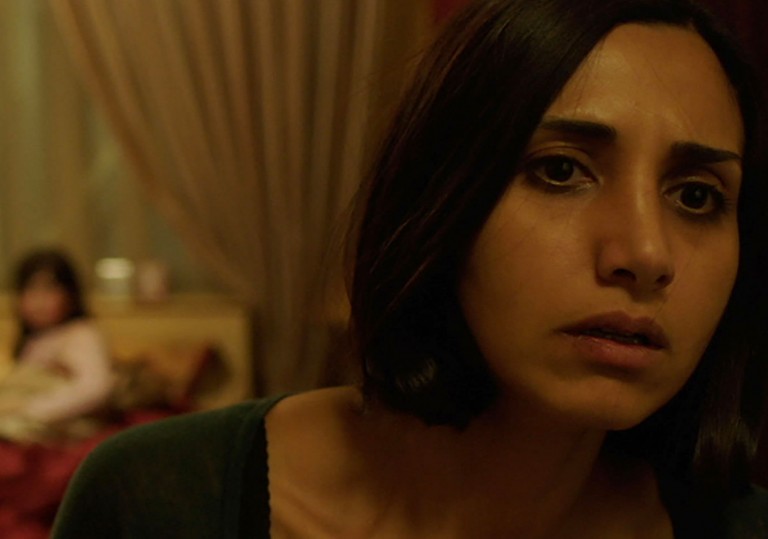 Much buzz on the festival circuit.

Expertly crafted, and top work by all concerned.

A situation is contrived whereby a mother is stranded in her own apartment during the bombing of Tehran in 1988. Nothing whatsoever can convince her that she needs to get the hell out of there, and fast. The roof caves in. The neighbours all flee. She has no family ties. She’s forced on daily trips down to the basement air-raid shelter. Her husband, an army medic, is posted to the front line, and she is left alone with her pre-teen daughter, Dorsa (Avin Manshadi). Why she choses to stay remains a mystery.

Though ostensibly a horror movie, Babak Anvari’s Under the Shadow is also a bluntly effective screed on everyday female suppression. It’s set in a specific place and during a specific time, but its feminist message is universal. The opening scene sees Narges Rashidi’s Shideh discovering that she’s been denied a place to learn medicine because she was involved in a anti-government protest during the Iranian revolution. She chalks up her dissent to juvenile impulses during a time when she didn’t know any better. Yet, her dreams of transcending her lot as a housewife and mother are dashed with a single swoop of a Biro (wielded by an older man). Maybe it’s her life of domestic enslavement that has led her to remain as the walls tumble in around her.

Another reason why she is unable to just cut loose is that Dorsa has lost her favourite doll, the one she sleeps with and clutches to her chest every waking hour. The doll is a symbolic protector, helping to prevent nightmares of loneliness or sudden death in the night. Amid all the mayhem, Shideh just needs to find the damn doll and then all will be well. Where could it have gone? Maybe the weird, rich family downstairs nabbed it while everyone was shuffling down to the bunker? Or perhaps it’s something else, something supernatural that’s forcing its way in through the gigantic crack in the ceiling?

There’s a lot to admire in Under the Shadow. There’s the inclination to pick out Rashidi’s grace-under-fire central turn which brings with it healthy side-portions of toughness and humour. But then Manshadi, as the daughter who could so easily have become a yapping cypher, is also superb, bringing a well-measured blend of precocity and vulnerability to her character. Anvari, too, demonstrates a more-than-sturdy directorial hand, making the best of limited resources and really projecting a sense of the oppressive confines of the increasingly dilapidated apartment block.

Yet there’s something naggingly formulaic about how the film plays out. It’s that old question that comes up in ‘found footage’ movies: why is someone filming this? In this case, why doesn’t Shideh’s basic survival instinct kick? Why won’t she accept her adult responsibility to remove her family from the path of mortal danger? It feels too much like the material has been awkwardly moulded around a thesis, and the subtext is presented with bells, whistles and bunting.

For every interesting point about women being second class citizens in Iranian society, it’s undermined by the basic logic of the plot. It also feels as if Anvari is saying that women’s unwillingness to take direct action is why they remain repressed. Still, it’s a mightily impressive debut feature, and Anvari will likely be signed on to a Marvel movie by the time you read these words.

Much buzz on the festival circuit.

Expertly crafted, and top work by all concerned.