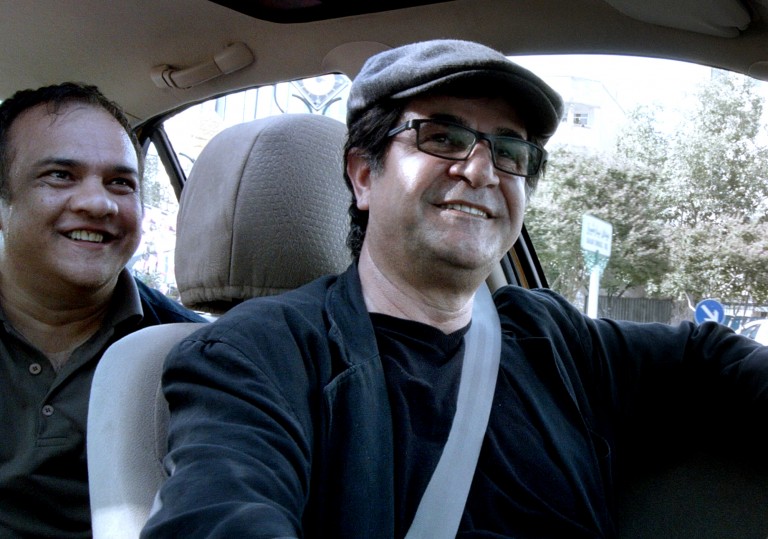 Jafar Panahi’s latest (and a Golden Bear winner to boot).

A sly, subversive stand in favour of empathy.

Jafar Panahi’s recent protest triptych – This Is Not a Film, Closed Curtain, Taxi Tehran – could be construed as criminal acts in the eyes of the Iranian government. Tethered to a lifetime filmmaking ban and extended house arrest, Panahi has nevertheless endured by creating innovative works that stand up to oppression through tenacious resolve. If the director is indeed an enemy of the state, the international film community has been his willing and vocal accomplice.

Solidarity is a strong theme in Taxi Tehran, Panahi’s most playful and hopeful film in years. A seamless and subversive meshing of documentary and fiction, it finds Panahi driving around Tehran posing as an everyday cabbie, interacting with customers (or are they actors?) in a variety of conversations. These discussions range in tone from trivial to serious, each hinging on a character’s ability (or lack thereof ) to empathise with another. The battle for artistic and political freedom underlines them all.

Firmly rooted in the driver’s seat, Panahi nevertheless positions himself as the captain of a vessel controlled by the whims of others. There is no end destination, only the movement between places that are supposed to be off limits for the camera. He listens to an array of passengers gripe about the government, watches an injured man get loaded into the backseat, speaks about state- controlled censorship with his niece Hannah, and humours an adoring DVD pirate who recognises the auteur immediately.

Despite taking place actively in the outside world, Taxi Tehran still retains a feeling of entrapment. Permanently fixed on the dashboard, the image feels locked in, just as much a prisoner as the filmmaker who can only experience the outside world posing as someone else. The camera still moves (Panahi manually conducts a few shot-reverse shots), but passengers often mistake it for something else (one man refers it to as an anti-theft device).

This Is Not a Film and Closed Curtain highlight the enraged pulse of political cinema living and breathing in confined private spaces.Taxi Tehran advances Panahi’s aesthetic by exposing the contradictions of ideological and political rhetoric in the public arena. “You live in another world,” yells a man arguing with a stranger sitting in the backseat. They bicker over the moral latitude of capital punishment, Panahi (and the audience) caught in the middle. When it’s revealed that the man is himself a burglar, the entire conversation takes on an absurd quality.

Taxi Tehran has a grand sense of humour. It rather lovingly suggests that crime and punishment are relative terms; one man’s serious offence is another woman’s slap on the wrist. What’s clear, though, is that the cinema can help clarify these gradations when examined by artists that still see hope in human nature and art itself. Look no further than the quote spoken by Panahi’s civil rights attorney late in the film: “Here is a rose for the people of cinema, because the people of cinema can be relied on.”

That flower rests on the dashboard during the final long take, in full view until two thieves literally steal the image away from us. It would be easy to get enraged by the interruption, but like Panahi does so often inTaxi Tehran, it’s hard not to smile.

Jafar Panahi’s latest (and a Golden Bear winner to boot).

A sly, subversive stand in favour of empathy.