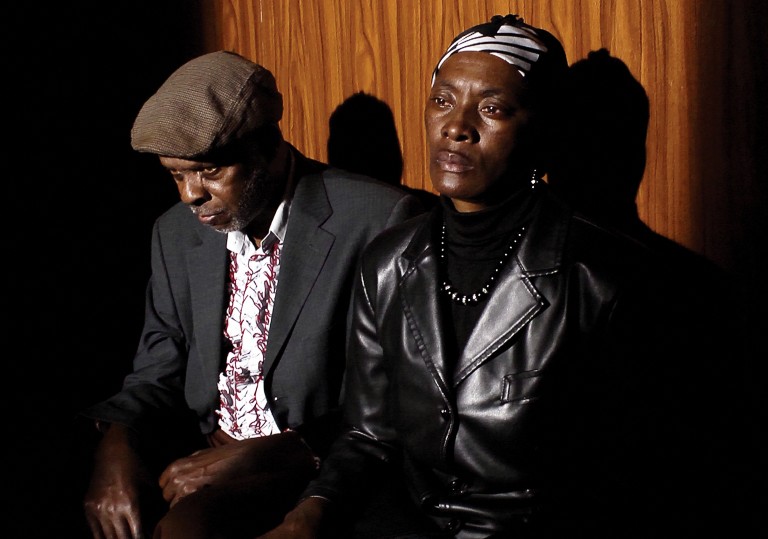 The Portuguese master’s first fiction feature in almost a decade.

A beautiful and grotesque evocation of repressed cultural memory.

One of the most impressive accomplishments of Costa’s career.

Pedro Costa’s Horse Money, the Portuguese filmmaker’s first fiction feature in over eight years, crescendos with an intensely cerebral 20-minute sequence set inside an elevator in which a flood of dialogue works to collapse an entire history’s worth of personal and political tragedy in one virtuoso display of accumulated aggression. Undeniably bracing, the scene – a slightly reworked version of Costa’s 2012 short Sweet Exorcism (originally featured in the Centro Histórico omnibus film) – is but the final and most violent example of the film’s foremost allegorical conceit, that of indoor space as physical manifestation of repressed cultural memory.

In Costa’s cinema, the act of representation is an act of exorcism in itself – or, as he put it in an interview with Cinema Scope magazine, a means to fully leave the past behind: “Some people say they make films to remember. I think we make films to forget.” It’s a declaration as weary yet sober-minded as this film is unsurprising, especially in light of Costa’s intimidating oeuvre, which carries the weight of both cultural and cinematic history in every deeply felt frame. Starring Ventura, the real-life Cape Verdean lead of this film’s loose predecessor, 2006’s Colossal Youth, as a lightly dramatised version of himself, Costa’s latest follows his ever-enigmatic collaborator through a succession of scenes and settings with an air of the purgatorial – a sense which the director encourages and exaggerates by way of abstract narrative chronology and highly symbolic depictions of institutional spaces.

When we meet Ventura, he’s lumbering down a dimly lit, cave-like corridor in his underwear, before awakening in a hospital bed surrounded by infantrymen who speak of the violence transpiring just beyond the walls of this unidentified sanitarium. Ventura is visibly sick. His hands shake, he struggles to walk. When he speaks he often returns to the memory of a horrific 1975 knife fight, from which he still bears physical and psychological scars. From here he proceeds to encounter many mysterious figures, each an apparent manifestation of a past friend, acquaintance, or colleague. The most striking of these is Vitalina, a fellow Cape Verdean transplant who has arrived for her husband’s funeral, an event we never see but which is deliberated upon at length when she and Ventura meet on a rooftop in the dead of night, the only light emanating unnaturally from the windows of an adjacent apartment building.

It’s evident in its elliptical presentation and somewhat episodic construction that Horse Money’s narrative transpires in a realm beyond traditional notions of reality. The film could thus be read any number of ways: as a portrait of the afterlife, or a death rattle hallucination, a vision of Ventura as he passes from one existence to the next, or as a waking nightmare precipitated by years of unrelenting trauma. Whatever the interpretation, Ventura’s journey feels inexorable, proceeding through a succession of spaces that are recognisable yet gutted of any tangible associations. Hospitals, catacombs, forests, warehouses – they functionally correspond to everyday conceptions of a troubled psyche, but fail to offer even the coldest of comforts.

The film’s largely nocturnal settings and stark, chiaroscuro lighting design, coupled with the actors’ ghostly incantations and generally defeated demeanours, suggest characteristics of the horror genre. Costa’s affinity for the style’s more outré practitioners – Jacques Tourneur, Edgar G Ulmer, Charles Laughton – has long been apparent (his debut feature, O Sangue from 1989, set its tale of sibling struggle in a monochromatic wasteland that could have easily been shot on midcentury studio sets). With Horse Money, however, such aesthetic inclinations reach new heights of expressionistic elegance. Costa frames each shot like a static mural, draping figures and objects in gulfs of darkness which spill forth from beyond the measure of the frame. These digital images, beautiful and grotesque, conjure a sense of apocalyptic grandeur at eye level, capturing dilapidated interiors at impossible angles and moonlit clearings with disarming austerity.

It all builds to the final encounter in the hospital elevator, in which an unknown, undead, unmoving solider – a kind of living statue – speaks to Ventura through the voices of the dearly departed. A ghost of the Carnation Revolution and a cipher of Portugal’s post-war industrial decimation, the soldier stands at the literal and figurative threshold of Ventura’s spiritual transference. Where he’s arrived and to where he’ll proceed at the film’s end is unclear, but the startling final image, in which Ventura and the weapon which so painfully haunts his memory find themselves stacked within the same cramped frame, suggest the wounds are far from healed.

The Portuguese master’s first fiction feature in almost a decade.

A beautiful and grotesque evocation of repressed cultural memory.

One of the most impressive accomplishments of Costa’s career.