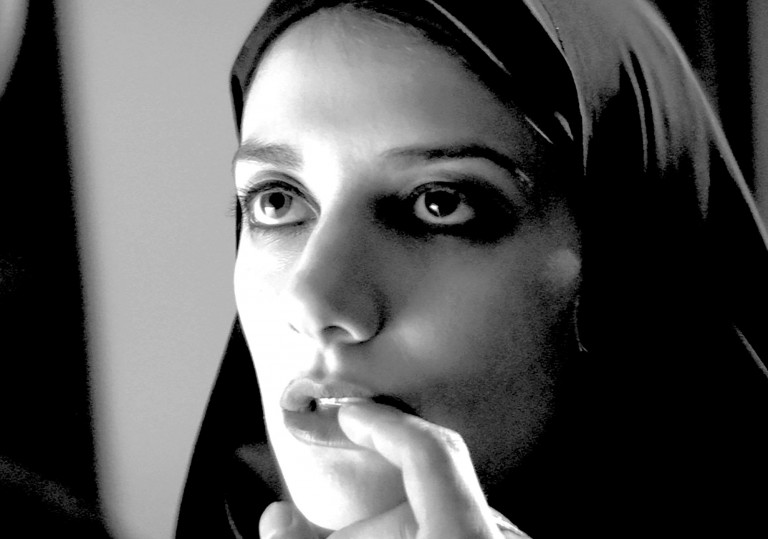 A groundswell of hype has led to comparisons with Tarantino and Lynch.

Call us old-fashioned but we like a bit of substance with our style.

Perhaps it’s too soon to write Amirpour off.

Like a mosaic of shimmering fragments that do not compose a bigger picture, Ana Lily Amirpour’s debut feature brims with stylised qualities that have been prioritised over story and characters. We’re in ‘Bad City’, Iran, the black-and-white, filmed-in-California version. Automatons pump and steam billows in the background while archetypes walk deserted streets, footsteps echoing like those of cowboys heading towards pistols at dawn.

Arash (Arash Marandi) looks like an Iranian James Dean, or maybe a Levi’s advert. He worked 2,191 days to buy a nice jalopy, only for it to be snatched by Saeed (Dominic Rains), a drug baron/ pimp with ‘SEX’ tattooed across his neck. Arash’s dad is a patriarch hollowed out by heroin but still endowed with a nasty edge. Streetwalker Atti (Mozhan Marnò) feels the worst of his crumbling power. Watching over all is The Girl (Sheila Vand), a vampire whose function is to shake-up the gender status quo using her fangs. And that’s the story – give or take a numbly enacted romance.

To be fair to Amirpour, she’s not gunning for straight storytelling and has deliberately fashioned a film that aims to play with genre ideas. The critical problem is there is no energy in the playing. Scenes are slow to the point of stasis. The only pulse comes from satisfying, eclectic music selections: haunting eastern strings, electronica and Sergio Leone-style chorals.

The Girl invites Arash back to her house and puts on a record by a post-punk band from Ealing. What unfolds as the song plays out is basically a beautiful music video, complete with disco ball, as two kohl-eyed humans come together in the cool lair of a post-modern vamp. It’s a slick pose and not much more.

A groundswell of hype has led to comparisons with Tarantino and Lynch.

Call us old-fashioned but we like a bit of substance with our style.

Perhaps it’s too soon to write Amirpour off.