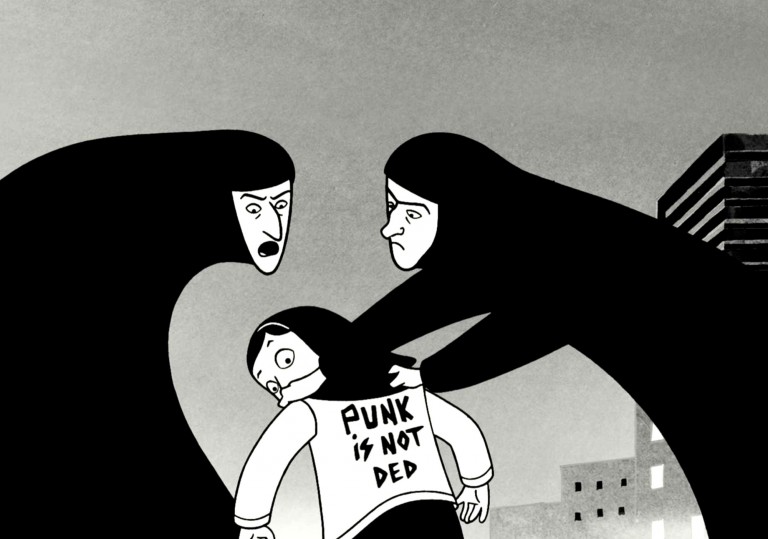 A stunning example of the art form. Who needs 3D?

“Animation is like the Wild West,” says Marjane Satrapi. “Anything is possible.” Really? Animation may be the Wild West, but its sense of possibility has been horse whipped and run out of town. The corporate cowboys are in charge, and unless you’re a CGI penguin or wisecracking donkey, you can expect to be on the receiving end of some rough justice.

But for anybody who believes that 2D is dead, Marjane Satrapi just brought it back to life. Her debut film, Persepolis, is a black-and-white, French language, hand-drawn animation set in post-revolutionary Iran. And it’s a powerful reminder that old-fashioned values still count: that originality, creativity and risk-taking can take animation beyond the ghetto of family entertainment and make it matter.

Of course, 2D never really died, not while the likes of Sylvain Chomet and Michel Ocelot kept its heart beating. But in America, traditional animation got the shit kicked out of it by Pixar, and the major studios never quite recovered. So what if The Iron Giant proved that there was life left in the hand drawn format? There was a magical new dimension out there. CGI was the future, and everything else was history.

In 2004, Disney closed its 2D animation studio in Florida. And though, ironically, John Lasseter’s appointment as Chief Creative Officer might reverse the decline, even the previously infallible Pixar have started to succumb to the law of diminishing returns. What seemed like a brave new world has somehow stagnated. They promised that story would be king, but it’s formula and familiarity that rule.

Marjane Satrapi may not be able to halt the slide, but she does offer a glimmer of hope. Working in a Parisian studio with a miniscule budget and an underground ethos, she’s proved that there’s still a place at the table for the little guy. It’s her personality that gives Persepolis it’s unique identity, and it’s that identity that makes the film an act of such glorious defiance.

Based on Satrapi’s own graphic novels, Persepolis begins as a child’s eye memory of the Iranian revolution. It’s 1979 and Marji (voiced as a youngster by Gabrielle Lopes, and as an adult by Chiara Mastroianni) is a nine-year-old girl whose childhood dreams of Bruce Lee and shaving her legs are replaced by the altogether more adult excitement of politics. As their parents march into the bullets of the Shah’s army, kids chase the offspring of suspected secret policemen, or chant slogans that they only half understand.

Marji is spellbound by her Uncle Anouche, a ‘comuniss’ who has been released from jail to help plan the future of the country. But what began as a people’s uprising morphs into an Islamic revolution, and though Anouche clings to the belief that the people will choose freedom, he is soon back in jail, the veil is introduced, and alcohol and music are banned. In the midst of this upheaval, Marji undergoes her own radical changes. The excited girl gives way to a rebellious teenager who is sent to Europe for her own safety. And though she returns to Iran, it is only to set the scene for a final farewell.

In Persian history, Persepolis was the half-built capital of the ancient empire. To Satrapi, it becomes a monument to better times only half remembered, and perhaps only half true, but a powerful touchstone nonetheless. And that, indeed, is the heart of her film: it’s a poem of exile and dislocation and the keenly felt love for home and family.

Marji’s parents are beautifully drawn, and there’s a heart-wrenching scene when she leaves them at the airport to begin her ill-fated life in Vienna. But the standout character is her grandmother, voiced by Danielle Darrieux, who represents another connection to the old Iran, not just before the revolution but before the Shah. While Marji is a passive heroine, tossed around by fate and circumstance, her grandmother is the rock that she clings to.

Their scenes together are so affecting, so clearly experienced, that it feels like you’re intruding on a private memory. Then in a flash, Satrapi will evoke a moment as when jasmine flowers fall from her grandmother’s bra, and you can only marvel at its expressive beauty.

And yet this highly personal story reaches out beyond the personal experience of its author. The Tehran that we see before the revolution could be London or Paris or New York. Though the political atmosphere was toxic, for most Iranians life was, well, life. It meant parties and friends and fun. And even after the revolution, when “every aspect of our lives changed, and so did we,” the people of Iran found ways not just to survive, but to carry on living. Parties moved underground and sex became more discrete, but life became a story of everyday revolutions, each one a victory against the system.

Forget the film’s colour scheme: by showing us this unseen side of Iran, Satrapi has taken a black-and-white issue and invested it with a new sense of subtlety. The Iran that we see every day – the ‘axis of evil’, the terrorist state – is not the Iran of the Iranian people.

Our media would tell us that Iranians are defined by hatred; what Persepolis shows is the palpable sense of disbelief that enveloped the country. They are angry just as we would be angry at the lies, the sexual hypocrisy and the dehumanising absurdity of the new regime – one in which a window cleaner can become a government minister because he grows a beard and hates women.

But in showing that the people of Iran are no different from us – were not in some way predisposed towards accepting a repressive regime – Satrapi suggests that it could happen just as easily to us. And before we laugh at the suggestion, it’s worth glancing uneasily over the Atlantic at a country where a Creationist can run for president; or closer to home where a liberal politician can’t admit to being an atheist without a tortured apology.

There is, in that sense, a veiled criticism of the West, although far more damning is what happens to the country after it is invaded by Iraq. Here, Persepolis assumes an apocalyptic tone, taking its visual cues from wartime propaganda posters and its pacing from the percussive beat of suicide bombings. The war, financed and encouraged by the West, changed everything in Iran.

“Only one rule will prevail,” announces a wild-eyed mullah, “that of blood!” As young men are offered a plastic key to heaven where they’re promised an endless supply of virgins, the ugly cult of martyrdom takes hold, decimating the country. These are the film’s angriest scenes, and though the primary target remains the Iranian government, they’re hard to watch without a sense of guilty complicity. Perhaps that accounts for the ambivalent shot of a Vogue cover, which hints suggestively that the dangers of Western imperialism might be real.

If all this sounds like a veiled history lesson, don’t worry. Though it occasionally lapses into exposition – as when Uncle Anouche recounts the story of his exile – these are often the film’s most visually arresting moments. They’re deliciously exotic; like reading from some ancient Arabic text decorated with obscure artistic motifs. Some clever dissolves, wipes and playful fades give Persepolis a kind of non-linear quality, as if the scenes in front of you aren’t being scanned consecutively, but have rather been dragged up from some place deep inside like a recovered memory.

And besides, for all the film’s political sympathies, it gradually reveals itself to be less a lament for some bygone age as a celebration of the here and now. Despite the exile, the hijab and the near fatal mistakes, above everything Marji represents the defiant possibilities of youth. That’s something no regime can deny, even when they remove its symbols and trappings. It’s that youthful spirit that keeps her alive (as captured in arguably the greatest movie montage of all time, brilliantly scored to ‘Eye of the Tiger’) and, moreover, keeps her country alive too, whatever the price.

Though it’s always tempting to give credit to an individual author, in truth, Persepolis is testament to the incredible work of the entire team assembled by Satrapi and her co-director Vincent Paronnaud. Paronnaud himself appears in a small cameo – a reflection of his humility rather than the role he played in the film’s production.

Likewise, every single artist who spent hours hand-drawing over 600 characters, and those who traced every last frame in black ink, and the background designers and the colourists and all the rest deserve every word of praise that comes their way. Because these are the people proving that it’s not just the brave new world that counts, it’s the artistry and wonder of the old one too.

A stunning example of the art form. Who needs 3D?