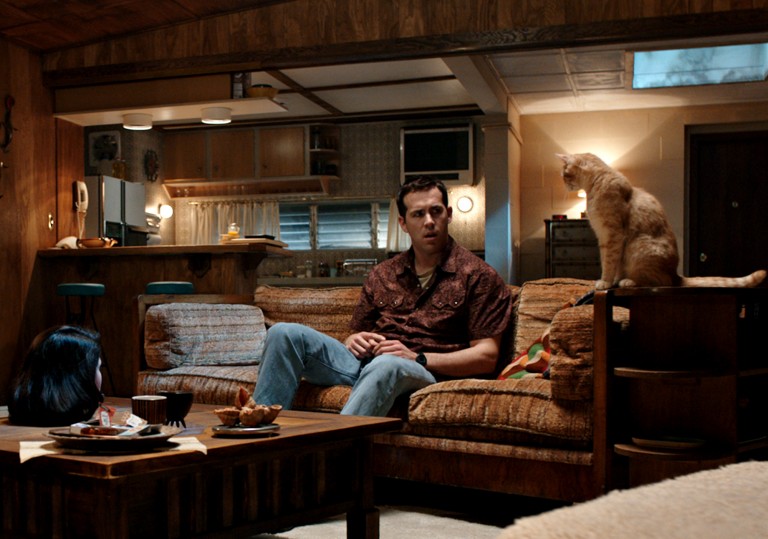 Ryan Reynolds voicing talking animals? Could go either way but Satrapi is the business.

Madness in great ones must not unwatched go. And watch out for your cats.

The melting down of barriers between sanity and insanity has never felt so intoxicating.

Jerry (Ryan Reynolds) is one troubled soul. Not that you’d know it from his cheesy suburban good manners – a veneer of cheer taken to the next level by the hot pink boiler suit that he wears to work at Milton Fixture & Faucet. His kindly therapist (Jacki Weaver) is happy that he has the social stake of employment, unlike his mother who, by letting go, became the most cacophonous of the personas that haunt her son. His doctor doesn’t know that Jerry has stopped taking his pills and is having nightly conversations with his cat, Mr Whiskers and dog, Bosco.

An arrow spins on a colour wheel of humour ranging from the bright-white of hilarity to a dark shade of black. Reynolds voices both his pets. The evil Mr Whiskers has a Scottish accent and his crude disdain (“Did you fuck the bitch?”) is at once entertainingly ludicrous and somehow entirely logical coming from an aloof feline. Bosco advocates for good and Jerry relies on him for love in a way that is unhealthy outside of the human-animal democracy of Walt Disney.

Is this making light of mental illness? No. Director Marjane Satrapi and scriptwriter Michael R Perry both have wild idiosyncratic imaginations and their combined individuality and comic daring have resulted in a paradoxical treasure trove. They have made a film that is both bleak and frothy, a tale of despair told with glee, a melodrama delivered with camp panache, a tragedy that is also a comedy.

Reynolds’ performance is attuned to all contradictions. Jerry falls for the “office hottie” Fiona, played with a mix of trashy cruelty and welcome sanity by Gemma Arterton. Jerry’s tactics for getting ahead with Fiona are determined by his pets, as they argue with each other for control of his behaviour. There are exchanges and scenes that if described aloud would sound cartoonish. Reynolds renders them touching by his manic, puppy-dog goodwill. He does bad things, lots of them, but is always stricken afterwards. Little-by-little, the world of pathological madness is made charming until it’s the most beguiling of hallucinations.

Production design with its vintage flair reflects Jerry’s earnest desire to see the good. An unreliable narrator alone gives no perspective on the universe and Satrapi provides illumination in certain shocking moments – Jerry starts taking his meds, kitsch surroundings become grotesque. Reality is too ugly to be survived so the rollercoaster of insanity is mounted again.

Several on-the-nose lines nail down the rails on which this incomparable ride is attached: “That head shrinker doesn’t care if you’re happy. She just wants you to be obedient.” It’s true, after a certain behavioural line is crossed, society doesn’t care for personal happiness. By playing with storytelling rules, almost to the point of madness, Satrapi has elicited sympathy for the devil.

Ryan Reynolds voicing talking animals? Could go either way but Satrapi is the business.

Madness in great ones must not unwatched go. And watch out for your cats.

The melting down of barriers between sanity and insanity has never felt so intoxicating.