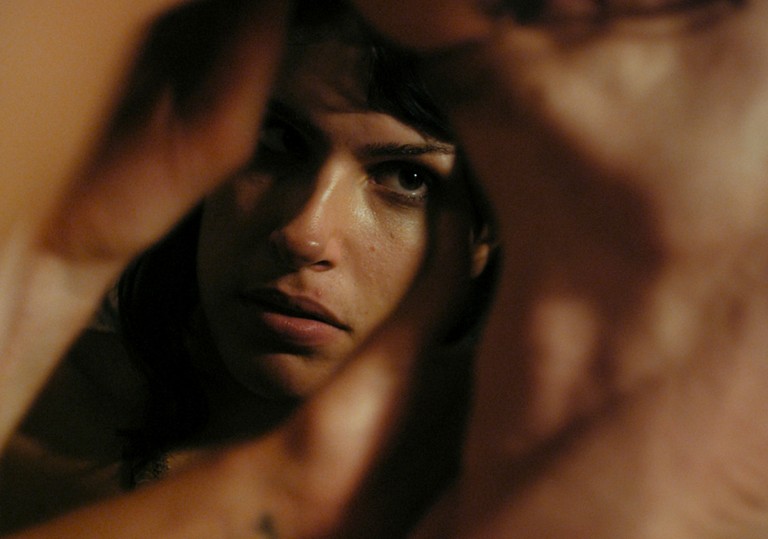 It's a Sundance movie about a young Brooklynite with an identity crisis.

Desiree Akhavan's debut is as funny as it is painfully true.

A vital new voice, one we hope to be hearing a lot more of.

A witheringly dry comedy about a young person trying to make sense of herself amidst the ridiculousness of modern Brooklyn, Appropriate Behaviour doesn’t just sound like a recent American indie, it sounds like all of them. But writer/director Desiree Akhavan’s warm, funny and honest feature debut — in which the writer/director essentially plays the person she used to be — towers above the crowd precisely because its maker seems to have vanquished the insecurities of her on-screen proxy.

A low-budget movie made by someone graduating from a low-budget web series (Akhavan’s show, The Slope, brought great honour to its format), Appropriate Behaviour has all the superficial hallmarks of a first film, and Scott Adsit (aka the bald guy from 30 Rock) is by far its biggest name. Nevertheless, it’s immediately clear that, unlike so many other inaugural efforts, this is a movie made by someone who knows exactly who she is, even if she had to learn it the hard way.

Lena Dunham’s Girls is the obvious reference point here, and it’s hardly a coincidence that Akhavan was cast in that show’s fourth series — you can practically hear Dunham fire off an email to her casting director as Shirin looks into Maxine’s eyes and says, “I hate so many things, too” before moving in for their sweet first kiss. And though Akhavan is attuned to the cultural specificity of her experience in a way that better allows her film to straddle the line between the universal and the intimately personal, she shares Dunham’s gift for laughing at the absurdity of a world that doesn’t seem to have any place for her in it, and the shame that can make someone feel.

Woody Allen might be a more accurate comparison, however, and not just because the movie’s fractured chronology is so evocative of Annie Hall. Akhavan shares Allen’s talent for being on the border of every scene she’s in; even in the film’s centrepiece scene, a hilariously awkward three-way involving way too much latex, Shirin is both a participant and an observer, Akhavan knowing that the character will all find this funny one day.

For all of its matter-of-fact modesty, however, Appropriate Behaviour comes uniquely into its own as Shirin comes into hers. Akhavan does small wonders with the role she was born to play, and by the time her film gets to its note-perfect conclusion, it’s clear that she’s nothing less than a true original.

It's a Sundance movie about a young Brooklynite with an identity crisis.

Desiree Akhavan's debut is as funny as it is painfully true.

A vital new voice, one we hope to be hearing a lot more of.