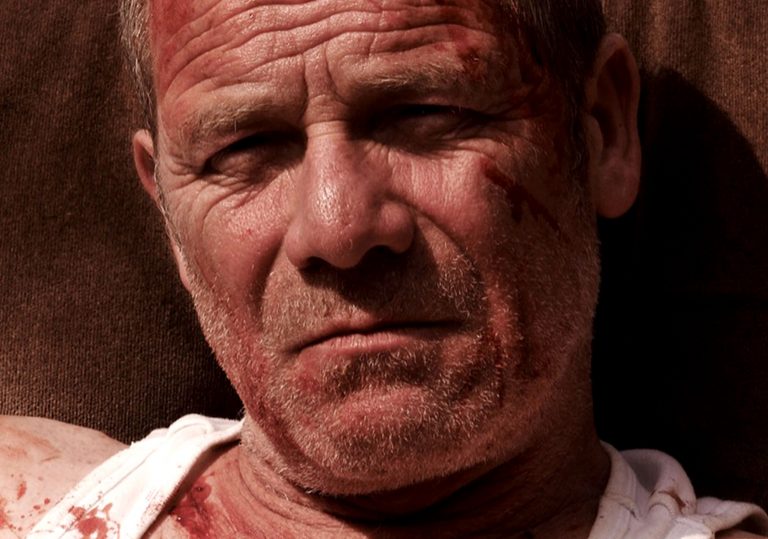 Great buzz from Sundance, where Mullan and Colman won a Special Jury Prize.

But also possesses a sentimental undertone that some may question.

The most remarkable thing about Paddy Considine’s feature debut is that it doesn’t feel like a debut at all. Considine may have made his name as an actor of rare physical presence in his collaborations with fellow Midlander Shane Meadows (A Room for Romeo Brass, Dead Man’s Shoes), but it’s the restrained assurance he brings to Tyrannosaur that stands out. And yet the finely tuned integration of camera, sound and editing belies the raw power that carries this story.

Developed from Considine’s BAFTA and Silver Lion-winning short Dog Altogether, Tyrannosaur stars Peter Mullan on uncompromising form as Joseph, a lonely alcoholic who contains an abyssal capacity for violence. Struggling to suppress his rage, the demons in Joseph’s nature lead him, paradoxically, to a fallen angel, Hannah (Olivia Colman), who appears to offer him a slim chance of redemption.

Joseph’s instinct is to lash out – to curse her God, her life and her charity – but he could have saved his breath. Because Tyrannosaur isn’t interested in anything as straightforward as Joseph’s soul. Gradually, inexorably and then horrifically, the roles are reversed until Joseph the damned has become the saviour of them both.

Considine’s eloquent, savagely poetic script is grounded in a cinematic idiom of bleached light, bleak estates and broken lives. Tyrannosaur is a fine piece of visual storytelling. He has an eye for inventive composition, and intuitively understands how to integrate that with the impeccable tech work provided by DP Erik Wilson, editor Pia Di Caula, production designer Simon Rogers and in particular the sound department led by Ben Squires.

If Peter Mullan’s performance – all granite-hewed menace and lines delivered like a sledgehammer cracking concrete paving slabs – is of a piece with his usual fearsome intensity, Olivia Colman, by contrast, is a revelation. Coolly subverting her smiley-eyed Peep Show persona, she brings a wholly unexpected edge of hysterical anguish and chilling pathos to Hannah.

But there’s something else going on in Tyrannosaur. It belongs to a tradition of peculiarly dark British dramas produced by successful working-class actors-turned-directors, a tradition exemplified by Gary Oldman’s Nil by Mouth and Mullan’s own NEDS. There’s a kind of statement being made here – a self-conscious shrugging-off of thespian success, and an overzealous reassertion of working-class identity. Tyrannosaur is Considine’s way of proving that he’s not ‘gone Hollywood’ – that he’s still Paddy from the block.

It’s there in the romantic mythologising of working-class values; the fundamental honesty of these hard, troubled lives that is directly contrasted with the dishonest and hidden hypocrisies of the aspirant middle-classes. There’s a part of Tyrannosaur that is happy to trade in clichés – the housewife who survives on a glass of wine, the unhappy marriage, the cutthroat bitterness of disappointment. What separates Hannah from Joseph isn’t his capacity for violence, but her’s for self-deception, and this latter is judged far more harshly than the former.

Even so, this is a conceptual issue in a film that succeeds through raw emotional power. Tyrannosaur is a hugely confident and accomplished debut from Paddy Considine. Did he just become the new Shane Meadows? Weird.

Great buzz from Sundance, where Mullan and Colman won a Special Jury Prize.

But also possesses a sentimental undertone that some may question. 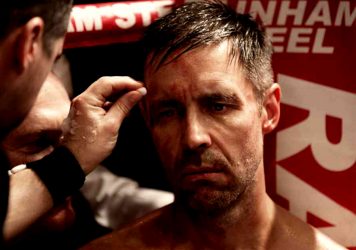 Paddy Considine’s second feature as director is powered by a clutch of big, bold and unabashedly emotional performances.