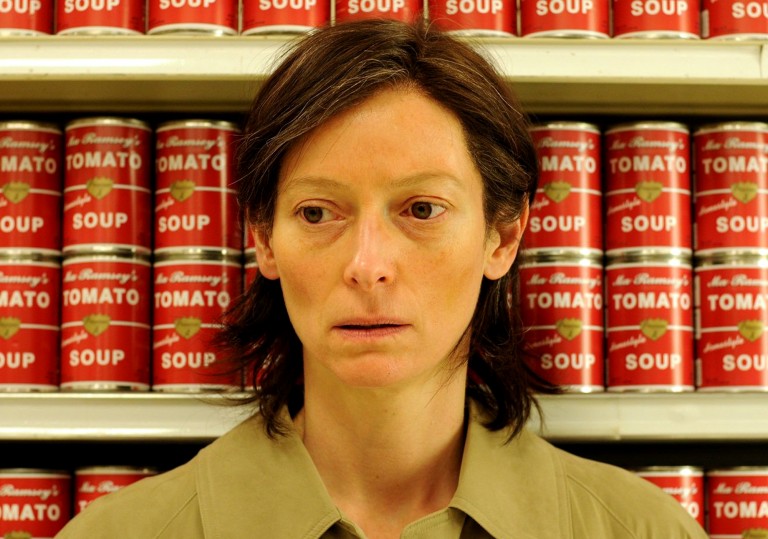 Ramsay has distilled the essence of the novel into a chilling cinematic work of art.

Five minutes into Lynne Ramsay’s provocative adaptation of Lionel Shriver’s unsettling novel about the aftereffects of a Columbine-style massacre, we are plunged into the subconscious of the eponymous killer’s mother, Eva (Tilda Swinton), in a bravura dream sequence set in Valencia’s La Tomatina festival.

Held aloft by a mass of writhing bodies, her wan skin stained with tomato flesh, she glides gracefully to a parting in the crowd before being set down in a sea of red and consumed by it. It’s a powerful image: one representative of the peace she longs to make with the life-shattering events of her recent past.

Back in reality, Eva’s waking world is similarly bathed in red, though here it’s a hue symbolic of police sirens and bleeding bodies, not rebirth, that covers her so completely. Whether hiding from a grieving parent in a supermarket, or scrubbing, Lady Macbeth-like, at paint thrown over her house by vandals, she’s haunted by it everywhere she turns. This is a film so drenched in crimson, it’s almost as if the negative itself has been steeped in blood in some sort of macabre post-production process.

Ramsay showcased her talent for visual storytelling and eye for arresting images in her earlier works Ratcatcher and Movern Callar. It comes as little surprise, then, that she’s jettisoned the source novel’s decidedly literary narrative device of presenting Eva’s thoughts as letters written to her estranged husband. Instead, she places us directly in the distraught woman’s head as Eva digs through her memory searching for clues as to how and why she became the mother of a cold, distant sociopath. It’s the nature versus nurture argument played out in a series of fraught, painful reminiscences.

Starting with the evening Kevin was conceived, Eva runs through her past in exhaustive, and exhausting, detail. Through these flashbacks we discover that her entire relationship with her son has been governed by a kind of hellish, prolonged post-natal depression. Initially unable to bond with him thanks to his non-stop crying, refusal to speak and toilet training problems, her resentment grows, reaching a seething peak when her good-natured husband (John C Reilly) convinces her to leave New York City and a successful career to help with Kevin’s development.

Intercut with these flashbacks are snatches of Eva’s current life, two years after the killings. Linked to her son’s crime by name and an infamous TV newsreel, she’s unable to escape the stigma of being the mother of the most hated 15-year-old in the country. Kevin continues to be the dominant force in her life despite being locked away in prison.

Borrowing heavily from the grammar of horror films, Ramsay uses disorienting angles, stalking POV shots and grainy close-ups to mirror the turmoil in Eva’s fractured psyche. Her expressive direction is matched by Swinton, faultless throughout, packing layers of nuance and emotion into every sigh and scowl. Together they combine to form a harrowing portrait of a grief-stricken mind in free fall that is as compelling as it is disturbing.

Ramsay has distilled the essence of the novel into a chilling cinematic work of art.