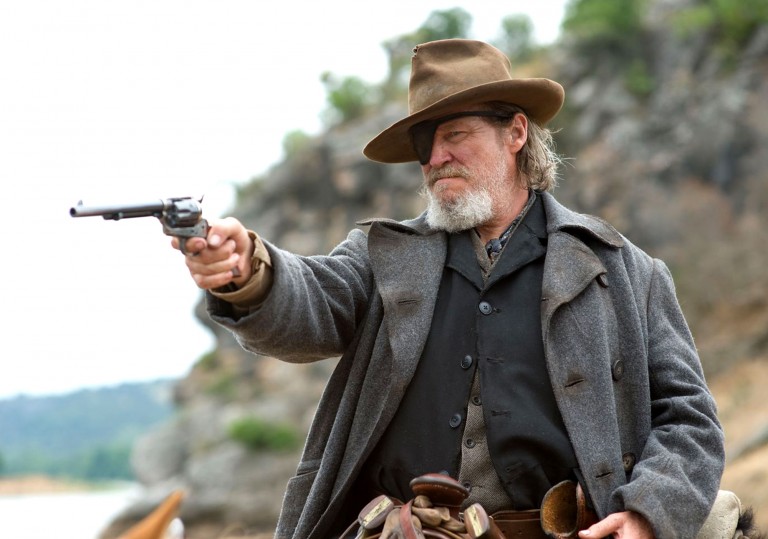 The Coens saddle up and go west, Dude and Damon in tow.

The Coens prove they can do straight-laced genre well, but the result is too safe to rank alongside their best.

“You must pay for everything in this world, one way and another. There is nothing free… Except the grace of God.”

Setting out her stall over a soft, melancholic piano refrain, Mattie Ross closes the prologue to True Grit with faith in her heart and venom on her tongue. On her quest for retribution she’ll need to keep both in good stock.

The rhythmic chatter of train wheels segues gently into chapter one, where a young Mattie (Hailee Steinfeld) watchfully and somewhat anxiously acknowledges her arrived destination through a front of glass and mettle.

She heads purposefully to the local funeral parlour, where an open casket confirms her father’s death before formalities give way to market stall bartering. Mattie deems the mortician’s self-valuation to be too high, but settles on the condition that she will be allowed to bunk among the souls and sawdust for the night. Welcome to Coen country.

Long before Larry Gopnik’s self-esteem took a kick in the toches and Norville Barnes rode his wheel to fortune and back; before the Soggy Bottom Boys’ big break and even before Bernie Bernbaum’s double crossing, Joel and Ethan Coen take us all the way back to nineteenth-century Fort Smith, a dusty Southern kiln run by salty US Marshall Rooster Cogburn (Jeff Bridges), who bathes in whisky and wrestles crooks when the mood strikes or, in this case, when the price is right.

For a tidy sum Rooster agrees to help our lionhearted, pigtailed heroine track down Tom Chaney (Josh Brolin), the slippery transient who murdered her father for two of his California gold pieces. They set out on horseback into the vast, formidable beyond of the Indian Territories, joined by LaBoeuf (Matt Damon in a refreshingly self-effacing turn), a mutton chop-cheeked, spur-clinking Texas Ranger who’s out to settle his own score with Chaney.

Bridges is at his surly and loveable best here, oozing mammalian machismo while retaining a familiar, grandfatherly aura. The eyepatch and Stetson are borrowed, but Bridges tames this roughneckin’ lawman with his own lariat. Certainly, the Duke would abide.

But the real star is Steinfeld. Hers is a curious character caught up in a timeless tale, but far from being overwhelmed she takes her bigscreen debut in her short stride with a fearlessness that borders on naïvety but is absolutely better for it.

At its essence True Grit is pure American fiction: its picaresque first-person narrative proudly channels Mark Twain and revels in the romanticised adventure of the wild west. It is candid, direct and darkly humoured. At times it loads a single bullet into a chamber and pistol-whips you so that each exhilarating hop is tainted by the thought that the next trigger click could blow you clean out of your comfort zone. It is a joyous salute to the Coens’ boundless dynamism and trusty bravura.

So why then – like a scoop of Rooster’s special recipe beans – does something not quite settle right?

This is the brothers’ most accessible film in years, but in their eagerness to do justice to Charles Portis’ novel they have obscured their kinetic, oddball brand of yarn-spinning. Not entirely, perhaps, but enough to niggle. The result is a film that is never less than riveting, but safer than we’ve come to expect from this most accomplished and prolific filmmaking duo.

Indeed, despite being fearsome scribes in their own right, the brothers’ cut and paste job of Portis’ ornate prose means that while the bristly, quick-fire rallies between our three unlikely amigos are white-hot on impact, the novelty of the dialogue fades like scattered embers.

Granted, True Grit is seasoned with the occasional sucker punch to remind you of the brothers’ savage sense of humour and ability to deliver bewitching character-driven cinema, but as decorative ribbon is looped into a neat bow around the film’s final act, those hoping for some vintage Coen skullduggery will find themselves left wanting.

The Coens saddle up and go west, Dude and Damon in tow.

The Coens prove they can do straight-laced genre well, but the result is too safe to rank alongside their best.