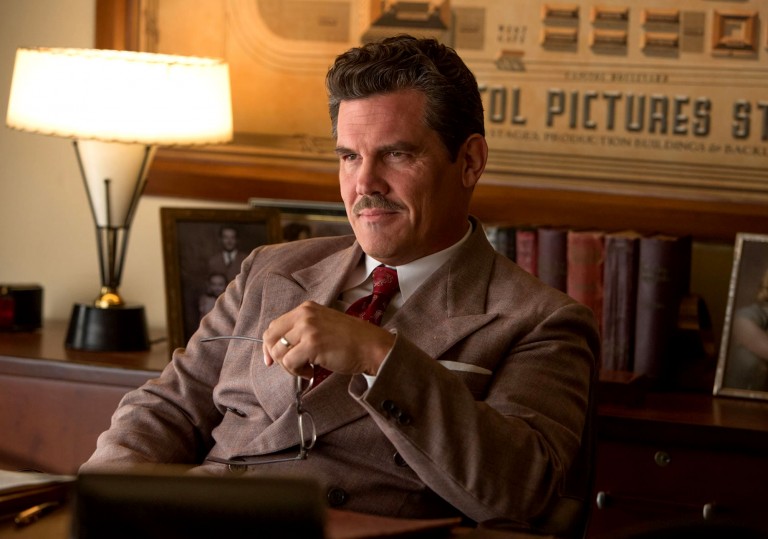 Every new Coen brothers’ movie is a major cinematic event.

On one viewing, hard to decide if this film is nothing or everything.

A second visit is a must, to solve the riddle at the film’s core and for purposes of pure pleasure.

The new film by the Coen brothers opens with Catholic confession, so I’d like to take this opportunity to offer one of my own. Since seeing Hail, Caesar!, I haven’t been able to process exactly what it is I loved about it. Maybe I didn’t love it, but was hardwired to reject the likelihood that the Coens would/could make a bad movie. In the moment, my pleasure receptors were reverberating off the scale. Every new scene is a surprising delight in what, at the time, appearing as a sunny, screwball satire pinpointing the moment where the Hollywood production line was starting to clank and creak. Would that it were so simple…

As the Coens have progressed as artists, they seem less interested in shaping movies in conventional ways. Just as a classically-inclined sculptor might focus our attention on a human torso without a head, or limbs, while using the negative space to emphasise what is and isn’t visible, the Coens make movies that confound expectation in similar ways. And they’re not doing so to punish and needle their audience, but to challenge them, playfully. Take, for example, a film like No Country for Old Men, which in its final third flutters away from its central chase dynamic to wax philosophical (and biblical) on the intimations of all that’s gone before. Elsewhere, 2014’s Inside Llewyn Davis is, narratively speaking, more of a loop than a straight line.

Hail, Caesar! resembles a cluster of occasionally conflicting resolutions that have been presented as a thesis on which there is no discernible outcome. A set of proposals more than a finite statement. Its central character is a Hollywood studio fixer (his job title is head of “physical production”) whose dedication to helping his employees manoeuvre around personal and professional follies verges on obsession. It also suggests the Coens believe that making art is not a case of an untrammelled creative outpouring sanctioned by people with money. It’s usually the result of people who are able to solve a diverse array of small problems without muss or fuss. The art that drops off the conveyer belt at the end of a shift is almost a happy by-product of cold process.

This fixer is Eddie Mannix, played by Josh Brolin and based on a real figure from Tinseltown’s back pages. For much of the film, his sole character trait is mild anxiety, born from a non-committal religious fervour and the belief that he’s not carrying out his duties to the best of his abilities. He’s also a character who craves affection from all around him: his wife, his colleagues and the press.

The film offers an extremely rare portrait of the movie industry in which the talent as well as the management are, if not sympathetic, then at least principled. The film takes place mostly on the lot of the fictional Capitol Pictures, which eagle-eyed Coens fans will recall was the studio that employed pinko whingebag Barton Fink to write a little Wallace Beery wrestling picture. But that was 1941, a time of barely concealed fury and depression. Per Hail, Caesar!, the studio has lurched in to an era of joviality and possibly even a softening of ambition. The good times are rolling.

We soon discover that Mannix has problems to deal with, but they’re not actually that pressing or important. An Esther Williams-like aquatic starlet (played by Scarlett Johansson) has been knocked up, so a team of back-room legal stooges are brought in to complete the necessary fiddles. A fresh faced, Audie Murphy-like gunslinger (Alden Ehrenreich) is finding it tough transitioning to a svelte, puckered romance à la Noël Coward. Also, Baird Whitlock (George Clooney), the twinkle-toothed leading man of the studio’s centrepiece Biblical epic, entitled Hail, Caesar!, is kidnapped by irate left-leaning screenwriters. They attempt to convince him to see the contentment he would experience from helping them to reclaim the means of production while also attempting to secure funds for their comrades back in Moscow. And they almost do.

The beauty of Hail, Caesar! is in its central paradox: the brothers tell us that making movies on an industrial scale comes with untold logistical horrors. People lose concentration on what they’re supposed to be doing, their minds wander and they forget their agreed goals. This blurring of ideals results in the film’s only scene of violence, and even though it’s relatively soft compared to the blood-lusting brothers’ past form, it’s strangely shocking considering the lighthearted context.

Political and romantic quandaries grind between the gears and slow things down. Marriages dissolve, and even the prospect of packing it all in and taking another job has its temptations. A sub-plot in which Mannix is being poached by an emissary from friendly weapons manufacturer Lockheed Martin can be read as representing all the times the Coens have perhaps been asked to make populist projects as directors for hire.

On the flip side, the Coens give us scene after scene of transcendent screen craft, whether it’s Channing Tatum executing an era-perfect sailor-themed dance number in the apocryphal MGM-like musical, Swingin’ Dinghy, Ehrenreich’s Hobie Doyle practicing his lasso skills in the street, or Clooney intoning a floorboard-rattling speech for the climactic reel of Hail, Caesar! The Coens offer no guidance as to whether all the toil was worth it. Instead, they have Michael Gambon delivering a fruitily ironic voiceover about how the studio is a merely a venue for the production of tactile dreams. Though their subject is art and movies, they could be talking about any physical endeavour, or act of creation. What is the real value in working towards something beautiful?

One sequence in Hail, Caesar! (the film-within-the-film) sees Baird Whitlock experience an epiphany while looking into the face of Jesus nailed to the cross – a face that is not revealed to the audience. Conversely, Mannix opts for the spiritual life out of social necessity rather than fervent desire. Like that sculpture, his Catholicism defines what he’s not as much as what he is. With the movies he’s had a hand in producing, he gets to look into the face of Christ (or local equivalent) on an almost daily basis. The Coens even make a joke of this when, during a screening of Hail, Caesar!’s rushes, a temporary title card pops up with the words, ‘Divine Presence to Be Shot’. More so than in their past work, the Coens have cast themselves as God, but a confused God with a wicked sense of humour.

Though it takes place within the same world as Barton Fink, Hail, Caesar! makes for a more poetic double bill with the Coens’ rueful previous, Inside Llewyn Davis. That film was about how great art – like revolution – requires a host of pre-conditions to connect with an audience. This one looks at that same question, but from a reverse angle. When that bond has been forged and the delivery perfected, how then do you retain the attention of your audience? With Hail, Caesar! the Coens are asking the question, what is God doing to retain an audience? Their answer is simple: making movies.

Every new Coen brothers’ movie is a major cinematic event.

On one viewing, hard to decide if this film is nothing or everything.

A second visit is a must, to solve the riddle at the film’s core and for purposes of pure pleasure.