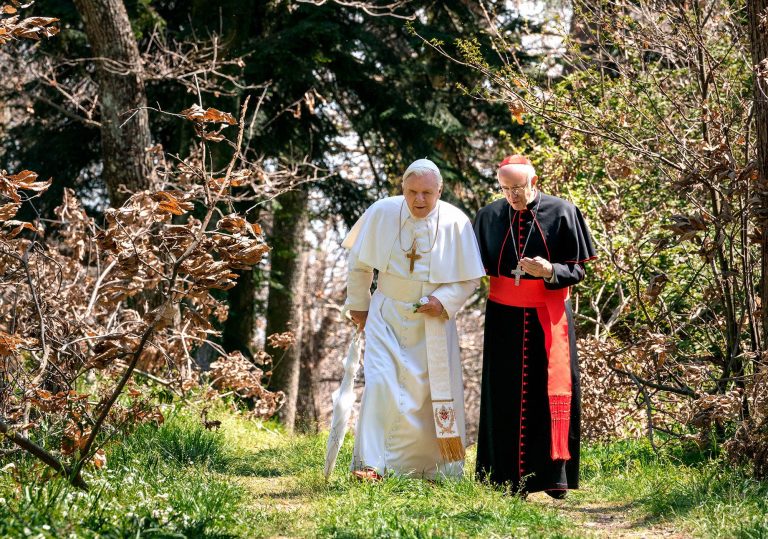 Two popes?! In this economy?!

Theological knots that refuse to untangle.

Anthony Hopkins and Jonathan Pryce make for a study in opposites as the co-leads of Fernando Meirelles’ talky drama The Two Popes. They portray men on either end of the same ideological spectrum; Pope Benedict XVI (Hopkins) was severe, conservative and a great believer in the opulence of his post, while his successor Cardinal Bergoglio (Pryce) was humble, affable and a promoter of forward-thinking social reform.

United in their unwavering faith yet divided on how best to express it, their exchange of power embodied a generational changing of the guard that could begin a new era for a Catholic church still marred by scandal.

Meirelles’ film imagines the days leading up to this epochal moment in religious history as a series of chats between Pope Benedict and the future Pope Francis, some walking and some sitting. It’s a gentle and quiet movie, the sort that would compel blue-hairs to make the trek to cinemas if it wasn’t already a Netflick. Yet where these unlikely box-office successes for grown-ups – your Victoria and Abduls, your Florence Foster Jenkinses — tend to get soft and lumpy, this Papal tête-à-tête is bolstered by a firm intelligence. It’s not quite My Dinner with Pontiff, but the spirit of cerebral searching still makes for a rich meeting of the minds.

If anything, Meirelles gets in his own way. An undue need to jazz up what would otherwise be largely static footage leads the Brazilian kineticist to scramble scenes with snap zooms, canted angles and other assorted formal flim-flammery. With the exception of the extreme facial close-ups that allow the audience to savour every wrinkle of Hopkins’ kingly visage, these little tricks only detract and distract from the acting showcase in progress.

The co-leads verbally spar their way through decades of regret and introspection, a pair of lions in winter. Each carries with them a good Christian shame unleavened by their years of devout service, and Hopkins in particular captures the physical and internal frailty of the aging Benedict. (He wears a smartwatch that constantly shouts bluntly symbolic encouragement such as, “Keep going!” at him.)

Pryce has a slightly more youthful spring in his step, but both men evince an awareness that they’re making choices that will effectively build their legacy as they go through their twilight years. It’s a film about absolution and forgiveness as tangibly real things, not just talking points in a politicised debate over the Church’s doctrines moving forward, but also the keys to making peace with ourselves before we depart this mortal plane.

Hopkins and Pryce run the show, and the two actors have the most legitimate claim to the position of auteur for this project. The film bends around their talents to offer each the beats of a fully-formed character, from first impressions to the glimpses of inner contradiction to the final revelation of their deepest and most private selves. For Catholics, these performances serve as a chance to get closer to a celebrity with whom ordinary people only get a few seconds of eye contact. But they’re just doing the same work as all great thespians that have come before – rendering knowable the contents of a person’s soul.

Two popes?! In this economy?!

Theological knots that refuse to untangle. 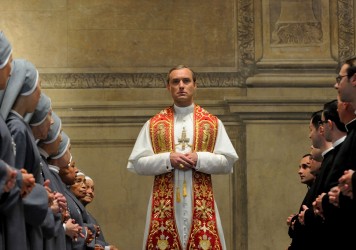