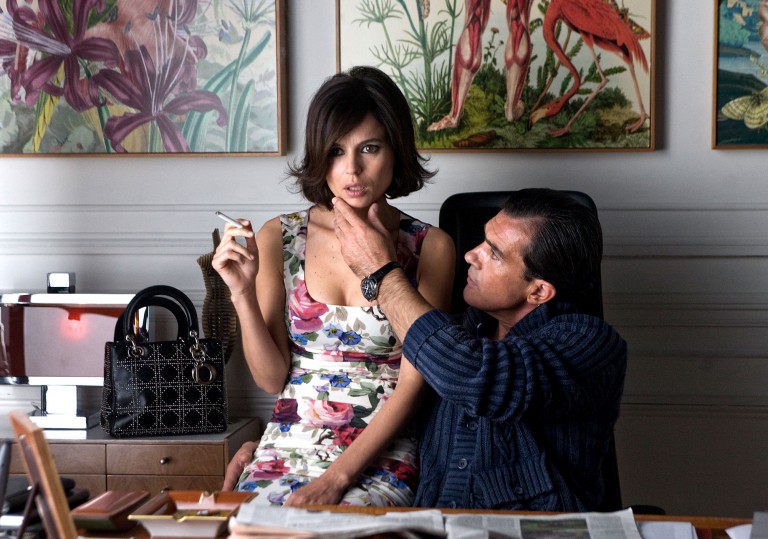 Not exactly. The Skin I Live In is an intoxicating elixir of dark fantasy, sick obsession and all-consuming desire.

An evolutionary leap from a true master of his craft.

What man creates with one hand, he destroys with the other. This hard-wired human paradox forms the crux of Pedro Almodóvar’s simmering tale of betrayal, revenge, and Promethean obsession. But before passions flare and the plot accelerates headlong into madness, Almodóvar establishes order.

We open in Toledo (the rustic capital of the Castile-La Mancha region synonymous with so much of the Spaniard’s work) with a postcard shot of the old city that echoes a frame from Luis Buñuel’s 1970 film Tristana. The overlying caption tells us it’s 2012, an early disclaimer that points to a pseudo-science-fiction subplot. ‘Once Upon a Time…’, it could read.

In a nearby lecture theatre, Dr Robert Ledgard (Antonio Banderas) is presenting his latest breakthrough to the science world. Through the use of transgenesis, a highly controversial interspecies cell-splicing process, this modern-day Dr Moreau has invented a revolutionary new tissue. But his dabbling in the dark arts horrifies his peers. The bones of the character are lifted from Thierry Jonquet’s 2003 novel ‘Tarantula’, but the rest is all Almodóvar.

Like all tortured cinematic baddies, Robert’s moral judgment was clouded in a previous life by a series of traumatic ordeals. In this ‘horror story without screams or frights’ (as Almodóvar has described it) he is an appropriately silent antagonist, honing his laser focus during endless nights developing his hybrid skin in a basement laboratory. All the while, his timid guinea pig, Vera (Elena Anaya), paces tirelessly in her first floor prison, flexing her flesh-toned bodysuit with yoga practice and skimming second-hand literature.

The grandeur of Robert’s palatial abode contrasts the sanitised nakedness of Vera’s chambers, where the walls have been defaced in typical penal fashion with eyeliner tallies and existential graffiti: ‘I breathe. I know I breathe’, reads one tag. Almodóvar, inspired by Fritz Lang and Alfred Hitchcock’s surviving silent noirs, originally intended for the film to be shot in black-and-white.

For someone renowned for his aesthetic flamboyance it’s hard to imagine what that monochromatic homage might have looked like. But a trace of it survives in Robert’s kitchen, where his live-in helper Marilia (Marisa Paredes) observes Vera on a colourless closed-circuit monitor.

Marilia is at first an idle voyeur. Her duties are domestic, and she carries them out with unflinching obedience until a foreign beast shatters this illicit equilibrium. In a delightfully spontaneous turn, Marilia abandons protocol and answers the door to a tiger on the lam. He’s Zeca (Roberto Álamo), a cutlass-scarred slavering brute of a man who’s seeking refuge following a bodged heist. It happens to be carnival season, and a garish tiger-print costume (equipped with penis-tipped tail) has so far enabled him to slip the fuzz.

With Robert away, the cat pounces on the chance to play, restraining Marilia before overwhelming and ravaging a helpless Vera. It’s a catalytic incident that ends as explosively as it began. It’s also where the genetic link that binds Marilia, Robert and Zeca crystallises. In the Almodóvar tradition of keeping it in the family, we’re presented with a portrait of a mother torn between feuding sons in a family touched by evil. “I’ve got insanity in my entrails,” accepts a crestfallen Marilia.

It was here that audiences first glimpsed Almodóvar’s curiosity with Stockholm syndrome. Now he’s flipped the psychological phenomenon on its head, as Frankenstein is seduced by his own beautiful monster. And with Robert’s guard down, Marilia switches from submissive mother figure to jealous housewife, threatened as she now is by Vera’s burgeoning empowerment. She watches Vera like a hawk, but Robert’s blindness renders her vigilance futile.

Like all the women in Almodóvar’s films, Vera and Marilia are born survivors. Forces beyond their control have altered their life paths, but they have the will to handle anything fate may throw their way. So where does this leave Robert? His genius is irrefutable – he is, from the get-go, an architect of identity, a magician of biometrics. But playing God comes with a heavy price: it exposes his mortality.

The films Almodóvar and Banderas made together in the 1980s – Labyrinth of Passion, Matador, Law of Desire, Women on the Verge of a Nervous Breakdown, Tie Me Up! Tie Me Down! – formed the bedrock of a collaboration that rivalled the most iconic onscreen parings. Banderas was the Bobby to Almodóvar’s Marty, the Kurt to his Carpenter. Indeed, it would prove as fruitful as any of the director’s flings with Carmen Maura, Marisa Paredes or Cecilia Roth. Banderas’ next film scheduled for theatrical release is Spy Kids 4 … How Hollywood has wasted him.

Back then Almodóvar saw an intensity and virility in his young Andalucían muse that would inspire him to write some of his most brutal and intriguing male characters – from a gay Islamic fundamentalist in Labyrinth of Passion to an affable rapist in Matador.

Today Almodóvar has said that, at 50, Banderas is the right age to play a psychopath. Dr Ledgard is possibly the director’s most unambiguous villain, but his lunacy is rooted in a domestic tragedy that is instantly humanising. This is reinforced by a triple-team of Castilian charisma, merciless good looks and a caramel machismo that makes Banderas so perfect for the role.

Like many of Almodóvar’s men, however, his power is transitory. Acting on his cardiac impulses puts Robert in a vulnerable position, but his undoing is entirely of his own making. Ultimately, there’s always a sense that the women will seize control.

In an early scene, Vera mounts an unsuccessful jailbreak. After gazing longingly at her on a large flatscreen fixed at eye-level on his bedroom wall, Robert heads to Vera’s room, pausing outside to plan his next move. She forces her way past him with furious determination, grabbing a kitchen knife in a last ditch bid for freedom. But Robert is prepared for any such event; his immaculate home doubles as a remote-controlled fortress.

During the messy episode, a single jet-black lock of hair breaks rank, falling limply onto Robert’s sweat-beaded brow. It’s the briefest moment of fallibility, but it’s enough to suggest that his patriarchal foothold might be slipping.

In this instance, however, Vera finds herself back on the surgical table in the skilled hands of her captor. A haunting cover of Elliott Smith’s ‘Between the Bars’ accompanies this reassertion of Robert’s authority – offering poignant respite from Alberto Iglesias’ lustrous crescendo of panicked strings and rippling bass notes.

This mix of classical and contemporary is a recurring Almodóvar trademark. Robert’s mansion is furnished with both Baroque and Cubist art, while contorted Louise Bourgeois sculptures pepper mantles and work surfaces. The self-referencing doesn’t end there. We’ve seen transsexuals in All About My Mother; rapists in Labyrinth of Passion; even a tiger in Bad Habits. Different puzzle. Same pieces. It all fits.

The Skin I Live In is an education in escapism. Its Chinese-box plot is a joy to unravel, each layer taking you further and further past the point of no return. The truth, of course, is that you won’t want out. Almodóvar’s vision is more sinister than anything that’s been conjured up in the darkest recesses of Park Chan-wook or Wes Craven at his peak. Yet this is a film of acute tact. Bursts of sexual violence are unsettling but never gratuitous; bodily mutilation is shown tastefully or not at all.

Like Broken Embraces and Volver before it, The Skin I Live In shifts through the gears with natural grace. Genres are effortlessly interchanged. It is a controlled demolition of a movie, efficiently and confidently set off by an auteur at the top of his game.

Almodóvar has nothing left to prove, but his refusal to slow down or bow to popular convention ensures that his films, while homogeneous in their stylistic and narrative tropes, retain an enigmatic quality. He’s still infatuated with introspection, but in engaging with ultramodern ideals he’s invigorated our anticipation for what’s still to come. It’s impossible to second-guess where he’ll take us next, and we wouldn’t have it any other way.

Not exactly. The Skin I Live In is an intoxicating elixir of dark fantasy, sick obsession and all-consuming desire.

An evolutionary leap from a true master of his craft. 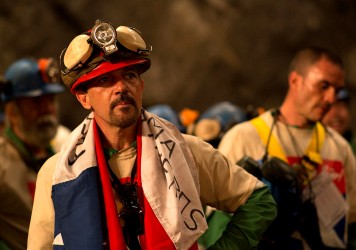 The Chilean mining disaster of 2010 becomes a tacky but agreeable genre flick led by Antonio Banderas.