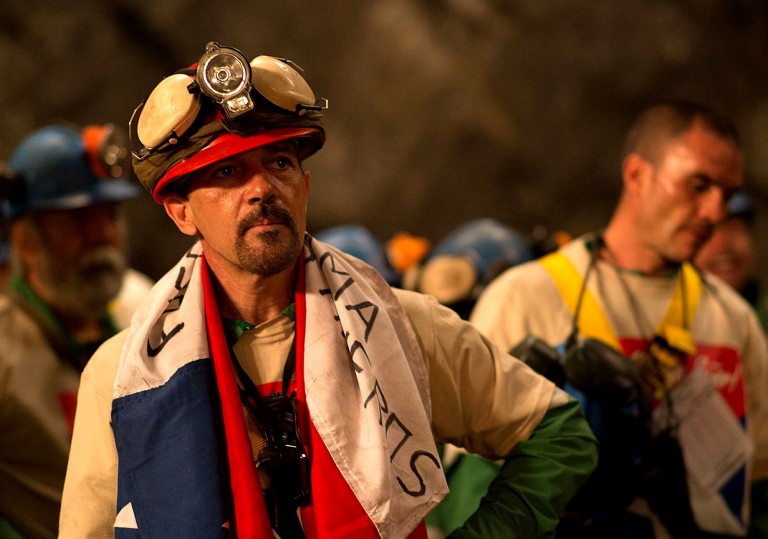 If Juliette Binoche has given this the thumbs up, then it must be at least okay?

It passes the time with its crummy melodramatic take on proceedings.

The Chilean mining disaster of 2010 becomes a tacky but agreeable genre flick led by Antonio Banderas.

The real life plight of 33 Chilean miners trapped down a mine shaft for 69 days is inelegantly corralled into a self-assembly disaster movie by director Patricia Riggen. Possibly paying lip service to the pan global efforts made to help free the men once their situation become a media focal point, The 33 offers the chance for a number of actors from countries such as France (Juliette Binoche) and Ireland (Gabriel Byrne) to break out their throaty Latin American twangs.

La Binoche emerges from proceedings, if not smelling of roses, then some kind of chemical formulation made to approximate the bouquet of roses or rose-like flowers. Byrne, on the other hand, cant quite suppress his natural brogue, which makes it much tougher to take all this very seriously.

The men descending into the mine on that fateful day of the disaster are introduced as happy-go-lucky types who all have romantic, family or economic issues they all want to tend to after this shift. Despite a predictably apathetic foreman who has never heeded safety warnings or basic employment regulation, the men go about their treacherous business, and it’s not long before the roof caves in and they are ensnared in a small atrium with no lifeline to the ground above.

Taking on leadership detail is Antonio Banderas as “Super” Mario Sepúlveda, who spends much of the film giving hope-based pep talks and preventing some of his more hot-headed colleagues from making their prospects for survival even slimmer than they are. Cleaving loosely to real events means that the dramatic arc peaks around the mid-section of the film, where a deep drill manages to find its way through to their prison. Riggen plays the sequence for a certain phallic gravitas, with Banderas standing topless as this giant, dripping drill bit protrudes from the roof above them.

By that point, the dynamics of the rescue mission lose their intensity, especially when all manner of food and creature comforts are being sent down the hole so the miners’ wait is as pleasant as can be hoped. Though their eventual escape is down to a miraculous feat of engineering, you can’t help but feel it would’ve been a better, more thrilling film were audience perspective to have been limited to either the hellish deeps or the above-ground bureaucracy.

If Juliette Binoche has given this the thumbs up, then it must be at least okay?

It passes the time with its crummy melodramatic take on proceedings.