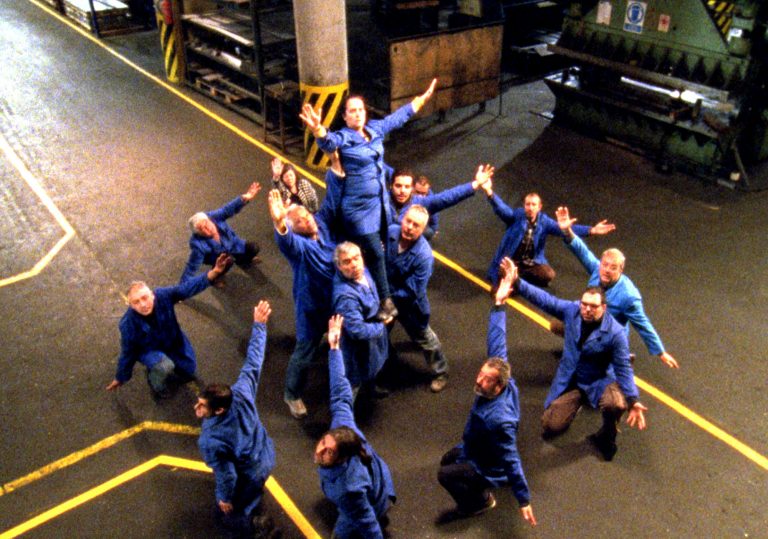 A big prizewinner on the festival circuit.

Very much it’s own thing, but in the best possible way.

A film which proves that you can fight the power while dancing at the same time.

If there’s one surefire way to alleviate the sense of drudgery that comes from working in a factory, it’s to kick up a song and dance. It’s tempting to describe Pedro Pinho’s quietly outraged UFO as a three-hour proletarian musical, but that doesn’t quite skim the surface of reality.

Making understandable waves as part of the 2017 Directors Fortnight sub-strand at the Cannes Film Festival, it’s a work that, while perhaps not entirely fully formed, heralds an exciting new voice in European cinema. Much like his Portuguese wingman Miguel Gomes, whose own mammoth Arabian Nights saw him pay little heed to narrative convention or commercial viability, Pinho’s intuitive epic loosely details the struggle faced by workers of a recently shuttered lift factory in the Lisbon suburbs.

Anyone who’s ever been involved in, or witnessed, staff redundancies will recognise the film’s chilling prelude, as oily bureaucrats patronisingly attempt to appease workers with faux-positive spin and empty promises of progress. They try to seduce their employees with words, but it’s not enough. The anger is righteous and instant. Hardware is smuggled out at night, but the workers know what’s up.

What begins as a strike swiftly evolves into an occupation, with the workers trying to figure out if they can keep this schooner afloat without the domineering powers that be. It sounds like a ripping revolutionary yarn, but that’s not the case.

Though Pihno clearly yearns for the economic self-reliance of the little man, he’s unromantic when it comes to depicting the realities of a dim situation. He is also interested in exploring both theory and practice. One mid-section chunk comprises a fascinating (if comically inscrutable) discourse on how leftist political theory relates to physical circumstance. Elsewhere, the film offers hushed digressions into the home life of the sweet natured though conflicted Zé (José Smith Vargas) as he tends to his young son and moonlights as the vocalist in a local punk band.

It is a film that boldly goes where it needs to go, and it feels like Pinho and his team are working through the material on pure instinct. It’s fascinating to see a film about what a revolution might look like during the Portuguese recession – there are no ramparts stormed or flags waved. It is almost accidental, as collective power quietly assumes control and the management eerily drifts off believing that nothing constructive can occur without their guidance.

Yet the new, slightly shambolic methods do work, and the business survives (rather than thrives) as other revolutionary units from across the globe begin to form their own ad-hoc trading channels. It’s a utopian vision of the 21st century labour market, but also, it seems, an achievable one. Aside from the occasional expressionist interlude, such as the late-game musical number in the management office, the film maintains a starkly realist mode throughout.

It’s more interested in process than drama – how a decision is made rather than the ramifications of the decision itself. It pushes the theory that everyone reaches a point, economically, where they know they need to agree in order to survive.

A big prizewinner on the festival circuit.

Very much it’s own thing, but in the best possible way.

A film which proves that you can fight the power while dancing at the same time.