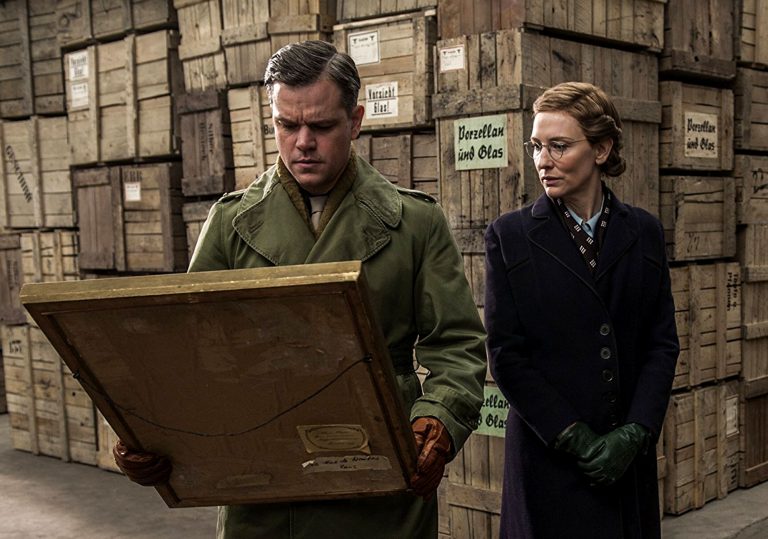 Not a cheap forgery, but by no means a masterpiece.

More Leatherheads than Good Night, and Good Luck, but Clooney once again proves himself a more than capable director.

George Clooney socks it to the Nazis in this rambling adventure yarn with an all-star cast.

March, 1945. With Paris liberated and the Russians starting to draw the Iron Curtain, Hitler’s troops are slowly being squeezed into submission. Yet while FDR and Churchill have already cut the tips of their victory stogies, for some World War Two is far from over.

The Monuments Men is the story of a snappily-monikered, ramshackle platoon who, at the tail-end of the conflict, are shaped up and shipped out to mainland Europe with the task of retrieving vast quantities of stolen art from the Nazis’ sinister grasp. Triumphantly draping Old Glory over the Third Reich’s tattered corpse to the tune of some five million works — including the priceless Ghent Altarpiece and Michelangelo’s Madonna of Bruges — this is the kind of high-stakes treasure hunt that would set Indiana Jones’ whip twitching.

Only the Monuments, Fine Arts and Archives mission really happened, though inevitably not all 400 of the men and women involved made it into George Clooney’s spirited but over-reaching historical drama. Here, Clooney himself leads a seven-man recon team comprised of museum curators (Matt Damon, John Goodman), an art historian (Bob Balaban), an architect (Bill Murray), a Brit (Hugh Boneville), and a Frenchman (Jean Dujardin).

They may be more familiar with Matisse than Mengele, but their battle is not being fought on the frontline. With the German army having been ordered to systematically destroy all evidence of the hidden loot, which is destined for the proposed Führermuseum, it’s up to this brave septet to locate the art before it’s too late. And so they split up and spread out armed only with their extensive knowledge (and plenty of guns), determined to rub salt in Hitler’s wounds.

Everyone plays their part gamely, yet despite the chummy chemistry on offer in the winning pairings of Goodman/Dujardin and Murray/Balaban, the script rarely fizzles and cracks the way it should. There are some amusing lines, and the overall feel-good tone is there, but Clooney and regular screenwriting partner Grant Heslov are too concerned with signposting every step of the mission while deliberating the wider ramifications it will have on the long-term preservation of Western culture. Even the mildly interesting moral quandary that underpins the group’s exploits — is a piece of art worth a man’s life? — is overplayed to the point of tedium.

Meanwhile Cate Blanchett, fresh off the back of her career-best performance in Woody Allen’s Blue Jasmine, is stuck doing an unconvincing French accent while attempting to give her sleuthing Parisian Resistance fighter purpose beyond providing a convenient plot bridge while offsetting the belly-slapping bravado of her male counterparts. Blanchett’s inimical relationship with a senior Nazi officer initially shows promise, but she’s gradually marginalised to the extent that she misses out on the real action. Granted it makes sense for her character not to tag along, but if you’re going to embellish a momentous chapter in World War Two history, why not let women in on the fun?

The film’s sentimentality and chest-puffing patriotism occasionally lands wide of the mark, too, although there are moments of real poignancy here (the image of Bill Murray taking a shower brings a tear to the eye for all the right reasons), and several genuinely suspenseful scenes go some way towards capturing the incalculable horrors of war. For all that this is a sincere if slightly old-fashioned retelling of a hugely significant event, however, watching Clooney and co give Fritz a ruddy good trousering ultimately isn’t as gratifying as it sounds.

Not a cheap forgery, but by no means a masterpiece.

More Leatherheads than Good Night, and Good Luck, but Clooney once again proves himself a more than capable director.