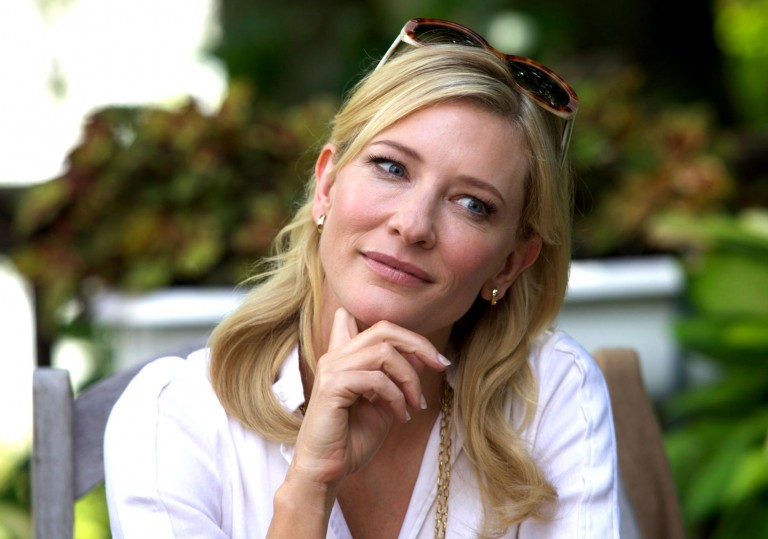 Erm, where the hell did that come from?

When the dust settles finally on this one, it’ll surely takes its place in the upper tiers of the Woody pantheon.

Woody Allen has always had a thing for ghosts. In the climactic shot of his 1976 ‘funny one’, Love and Death, the ghost of Allen’s recently executed Russian nincompoop Boris has a final exchange with a grieving Diane Keaton prior to gambolling off into the distance – Grim Reaper in tow – to the dainty strains of Prokofiev. Flash forward to 2011’s Midnight in Paris and Owen Wilson’s preppy novelist is seen fraternising with the liquored-up luminaries of the Jazz age Euro arts scene. Even in his previous movie, the largely execrable To Rome with Love, Allen employed a sagely sprite as a cheap device with whom neurotic Jesse Eisenberg’s lovelorn student could trade fortune cookie philosophical truthbombs.

With Blue Jasmine, however, Woody has shifted away from co-opting apparitions as silly jokes, conduits for wistful nostalgia or spectral Brechtian wailing walls. These ghosts take on two opposing forms: blissful memories of indulgence and prosperity, the remnants of monied libertines from a life that has somehow ended prematurely and in total disaster; also the ghosts of a Dickensian demi monde who exist on the other side of the moat and drawbridge. Though it works exceptionally well as the tale of a woman attempting to scheme her way back into the corporate jet set, Blue Jasmine should also be considered as the abstract projection of internal delirium and paranoia. It’s a more penetrating and even harrowing experience if we accept that none of the characters we’re seeing on screen are real.

Except Jasmine (Cate Blanchett), that is. Jasmine is the one who communes with ghosts. For these are her ghosts, concocted in her own ruptured mind. Once an acrid lady of leisure with perma-patronising New England drawl and an insatiable appetite for life’s fineries. Now a washed-up Bay Area floozy whose attempts at self-improvement are stifled by her utter contempt for those whose blood doesn’t run blue. There’s something of an Edie Beales (tragic star of Albert and David Maysles’ Grey Gardens) to Blanchett’s Jasmine, a mercurial dilettante for whom recollections of the luxe lifestyle of yore provide a fur-trimmed safehaven from the realities of financial penury. In a sense, Blue Jasmine is one of Allen’s most nakedly political films, addressing not merely the discordant traits of class behaviour, but those hallowed members of the ‘one percent’ who habitually disbar themselves from the licentious activities of the working masses.

Jasmine’s ratbag hubby Hal (Alec Baldwin) is ushered in as a trouser-dropping Bernie Madoff manqué, a twinkle-eyed fiscal huckster whose bejewelled beachside chateau is built on stacks of filthy lucre. It’s clear from the off – with the now penniless Jasmine lugging her monogramed Louis Vuitton luggage from the breezy East to the dirty West to take up residence with her salty white-collar stepsister, Ginger (Sally Hawkins) – that something happened and the money ran out. But it’s the detail of Jasmine’s downfall, particularly the grim process of her inexorable breakdown, which makes this a contemporary tragedy that stands toe-to-toe with the likes of Terence Davies’ 2000 masterpiece, The House of Mirth.

Now without meaning to sound all hot-headed, there is genuine cause to believe that Blue Jasmine may well be Allen’s magnum opus, an agonising melodrama and finely textured character study which transcends the playful literary posturing and veiled autobiography of his past work to become something so raw and incandescent as to feel like a heady throwback to the greats of the studio era.

The knee-jerk point of comparison is to Tennessee Williams’ erotic American classic, ‘A Streetcar Named Desire’, particularly in its focus on fallen women, the insidious effects of insanity and the bitter, ingrained tensions sparked via family and class relations. This is actually a more sincere, less academic film than Elia Kazan’s seminal 1951 screen adaptation, mainly down to Cate Blanchett’s ability to command sympathy for her she-devil, something which Vivien Leigh and her vast lexicon of pained moans and affected actorly tics could never achieve. That’s not to say Allen purposefully tempers the stiflingly obnoxious mindset of Blanchett’s character to make her more lovable. No, it’s the fact that Blanchett and Allen are so invested in Jasmine’s utter ideological estrangement from contemporary life (a reference to Allen himself?), that the film’s heartbreak arrives in the realisation that salvation is simply not an option.

Allen has often ushered in lazy cultural stereotypes in order to give his plots a firm boot up the backside, and here he could be accusing of doing exactly that. A peculiarly charming supporting turn from ornery ’80s bluebook stand-up Andrew Dice Clay (replete with trademark drag from a pinched cigarette) as Ginger’s ex husband supercharges a character that could’ve easily existed as ‘Misc schlub #3’ in the script. Yet these stereotypes are only egregious when forced to hang in the orbit of the anxiety-prone intellectual hero (often Allen himself) in order that he swing his verbal brickbats at them. Blue Jasmine attains its perfectly balanced dramatic equilibrium by refusing to offer an easy point of emotional entry. There is no-one with whom to sympathise, to buddy-up with on the moral high ground and chide the faults of the unfortunate and the naive.

As Allen has developed as a filmmaker, he appears to have lost the ability to draw out the romantic allure of the city. His recent run has consisted of problematic ‘postcard pictures’, an ill-fated Euro sojourn which gave us the severely mediocre likes of Vicky Cristina Barcelona, To Rome with Love and Match Point, the latter coming across like a film in which the cinematographer was in the direct employ of the local tourist board. But on this evidence, Woody can still work magic with a city, and not just in appropriating them as romantic snowglobe backdrops. In one of Midnight in Paris’ most extraordinary sequences, the iconic attractions of the French capital are visually indexed – scrapbook-like – in a single montage set to music. Taken in the light of the ensuing tale, we see that this is a film about the birth of modern Paris.

In Blue Jasmine, Allen integrates the psychological turmoil of his lead character with a decision to present the city of San Francisco as an inchoate urban centre with no real defining features. It’s as if Jasmine is blind to the stimuli of landscape, so consumed is she with a craven desire to claw her way out of this grubby cesspool of tattoos, large-screen televisions and circuitous conversations about clams. Unlike Manhattan, this is less a city symphony, more a city requiem, a film in which location loses all of its aesthetic and emotional lustre. It’s a sign of Jasmine’s blindness, her inability to see beyond her own ego.

Everything interesting about Blue Jasmine is made possible due to Cate Blanchett’s colossal central performance, arguably her greatest ever. A precedent in her career would be her lively take on Katherine Hepburn in Scorsese’s The Aviator, though that was a bubbly swizz compared to this. There are even hints of Norma Desmond in Sunset Blvd., particularly in the damage that comes from being suddenly mothballed from the world to which you think you belong. Blue Jasmine is a nightmare movie, the simple tale of a woman who had everything and lost it all in a heartbeat. It doesn’t ascribe to the quaint conventions of cinema by making sure Jasmine gradually comes around to the hazards of materialism and sees the error of her ways. Here is a film which dares to ask, what if, despite everything, your body just wouldn’t allow you to let go?

Erm, where the hell did that come from?

When the dust settles finally on this one, it’ll surely takes its place in the upper tiers of the Woody pantheon. 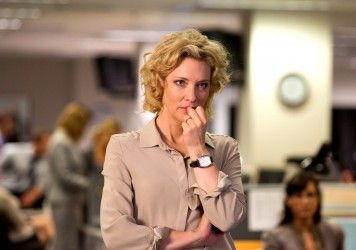 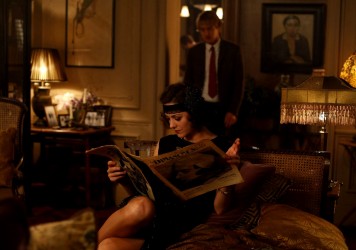