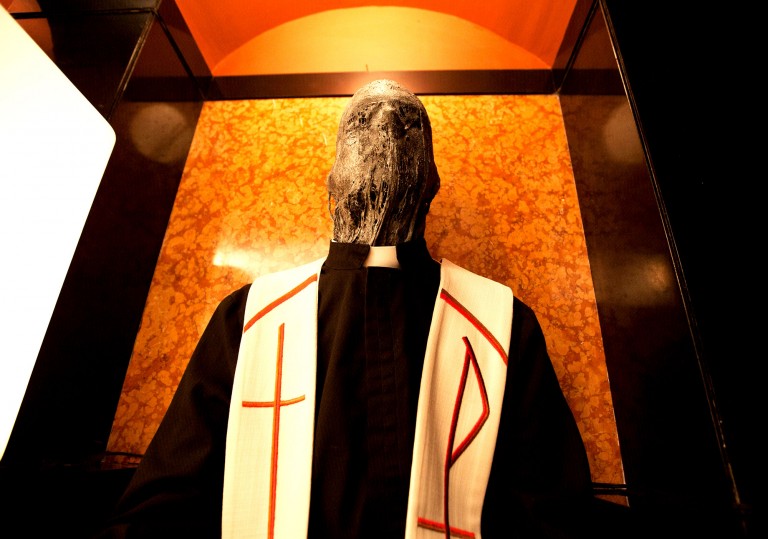 Caveat emptor, but there are bad-trip rewards aplenty for the Zombie faithful.

As The Lords of Salem opens, we first see protagonist Heidi (Sheri Moon Zombie) nodding off in a car. And then the 17th-century Puritan Jonathan Hawthorne (Andrew Prine) scribbling in his diary about the witch Margaret Morgan (Meg Foster) and her ‘blasphemous music’ (“driving me to the point of insanity”).

Music will also trigger Heidi’s 21st-century descent into madness, but there is the suggestion here, engendered by this editorial juxtaposition, that the ‘flashback’ to Hawthorne may just be in dozing Heidi’s head. As much as, immediately after Morgan and her coven of six ‘Lords’ have been seen attempting to summon Satan in the woods, Heidi is shown crapulously waking from sleep. This devilry is perhaps all just a dream.

A dreadlocked, tattooed radio DJ (and ex-junkie) in Salem, Heidi is surrounded in her work by Satanic rock, not to mention by her city’s infamous past . When, drunk and tired late one night, she spins a mysterious, droning vinyl album sent to her by ‘the Lords’, she too will start spinning, visited by waking visions of witchcraft.

After all, as local historian Francis Matthias (Bruce Davison) puts it, “Witchcraft is nothing but a psychotic belief brought upon by a delusional state of mind”. And the content of Heidi’s paranoid hallucinations all seems to be directly inspired by the death metal videos, artworks, television images and religious tchotchkes that furnish her life, as well as by the drugs to which she is once again resorting in a relapse of the instability that marked her past. All the crazy freakouts and diabolical goings-on shown here may be as much Heidi’s as the film’s projections.

There is an alternative reading: that Heidi really is the vessel of a curse visited upon Salem by genuine (as opposed to merely accused) witches returning from the grave for unholy vengeance against the bloodline of their one-time persecutors. Since, of course, The Lords of Salem is essentially a horror movie, it will ultimately go the way of genre and privilege the supernatural over the rational, but before that happens, much like the films that it so lovingly apes – Stanley Kubrick’s The Shining, Roman Polanski’s Rosemary’s Baby and The Tenant, William Friedkin’s The Exorcist – it will flex and stretch its ambiguities to uncanny breaking point.

As modern yet retro as the film in which she appears, Heidi listens to outmoded vinyl, lives in an apartment festooned with stills from Georges Méliès’ 1902 classic A Trip To The Moon and seems only ever to watch old black-and-white films on her television. Likewise she shares screen space with a rogues’ gallery of aging genre icons like Judy Geeson, Meg Foster, Ken Foree, Dee Wallace, Maria Conchita Alonso, Michael Berryman and Sid Haig (even Clint Howard, Camille Keaton, Udo Kier and Richard Lynch had been filmed in now deleted scenes).

Meanwhile, the baroque phantasmagoria of Heidi’s visions is achieved not through voguish CG digital effects, but rather via such old-world machinery as editing and (exquisite) set design. And so Heidi is haunted not just by her own demons, but also by the history of her city and of cinema itself, with the past ever intruding itself upon the present.

Rob Zombie is without question a Marmite filmmaker. The deliriously disorienting impact of his first two features (House Of 1000 Corpses and The Devil’s Rejects) is regarded by some as mere incoherence, while others cannot abide his comic-book dialogue, his mean-spirited sensibility or his insistence in casting his wife (herself a Marmite figure) in all his films.

Yet for his admirers (full disclosure: I’m one of them), he is a misbegotten master of sleazy sado-surrealism, and as long as you are willing to turn a deaf ear to some of his leaden lines and a blind eye to the unprepossessing presence of his leading lady, there are audiovisual treats aplenty to be found in this murky psychodrama of devilish fantasy.

That said, in making his climactic scene a performance by the Lords of Salem in a theatre space that is near empty, Zombie would appear to be openly acknowledging the very niche nature of his audience. Non-fans of Zombie are unlikely to rush, and even less likely to be converted. But those who worship the old devil will be granted their every errant desire.

Caveat emptor, but there are bad-trip rewards aplenty for the Zombie faithful.