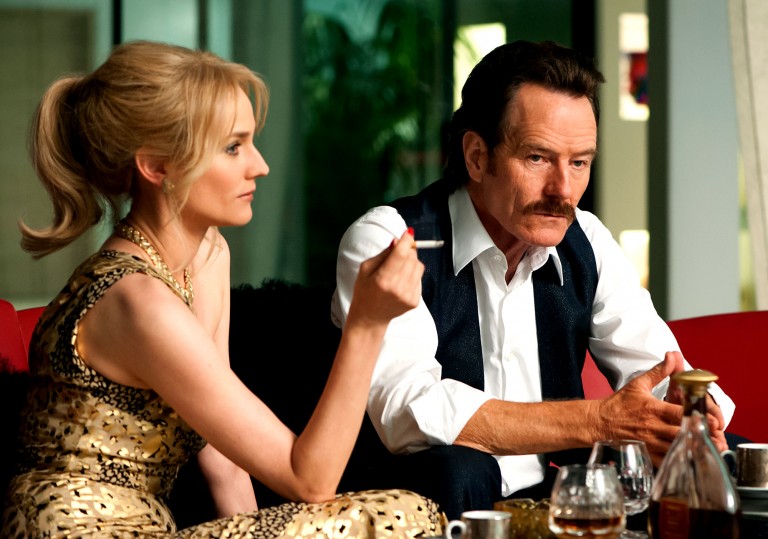 Frankly, this doesn’t look like it’s going to offer up something new.

And it really doesn’t. Unlike its undercover hero, plays it very safe.

A very nuts and bolts true-life police saga in which Bryan Cranston goes deep undercover to foil a drug cartel.

If there was a bestselling non-fiction book called ‘Second-Whack Police Thrillers for Dummies’, then director Brad Furman has read it cover to cover and inside out. The Infiltrator is every bit as bland as its title would suggest, the moderately glossy “true life” tale of ultra-dedicated FBI man Robert Mazur (Bryan Cranston) who opts to go full Donnie Brasco in order to bring down a Columbian drug cartel. The big game prize at the end of the hunt is Pablo Escobar himself, but you can’t just take a pot-shot at the king – you’ve got to play the long game.

The process of going undercover – the sensitivities, the details, the worries – is glazed over, as Cranston simply transforms between the edits. There’s no sense of how he builds a persona or slides into character. One sequence in which he’s trading trivia with his pretend wife (Amy Ryan) makes it feel like a film is a quaint caper about two people attempting to sneak into Canada.

It settles into some kind of grove by about the half-way point, where Mazur discovers that not everyone tangentially involved in large-scale narcotic import/export is a low-life shit-weasel who deserves to have the book thrown at them. Close to the top of the tree, he connects with Benjamin Bratt’s Roberto Alcaino and his delightfully gorgeous wife (Elena Anaya). They are cultured and refined. They sup wine from oversized crystal glasses, and chop vegetables (for fun!) instead of calling on a maid or cook to do so. These are just normal folks tangled up in society-damaging vice, maybe to a level they don’t quite comprehend. Whatever, the pair’s fast friendship becomes the nagging sinew that prevents Mazur from making a clean break from his undercover life.

Even when grinding through stock moves like the loco inner-circle wild card who needs to be, ahem, silenced, to the big-collared psychopath who might have twigged on to the ruse, the film never attempts to bring anything interesting into the conversation. The ghost of Walter White looms large over Cranston’s character, an essentially simple, white-bread family man who dares to wade into a world whose manifold dangers he’s ill-prepared to deal with. A more-than-able character actor, let’s hope that it’s sooner rather than later that Cranston finds a creative collaborator who is able match his talents rather than watering them down.

Frankly, this doesn’t look like it’s going to offer up something new.

And it really doesn’t. Unlike its undercover hero, plays it very safe.