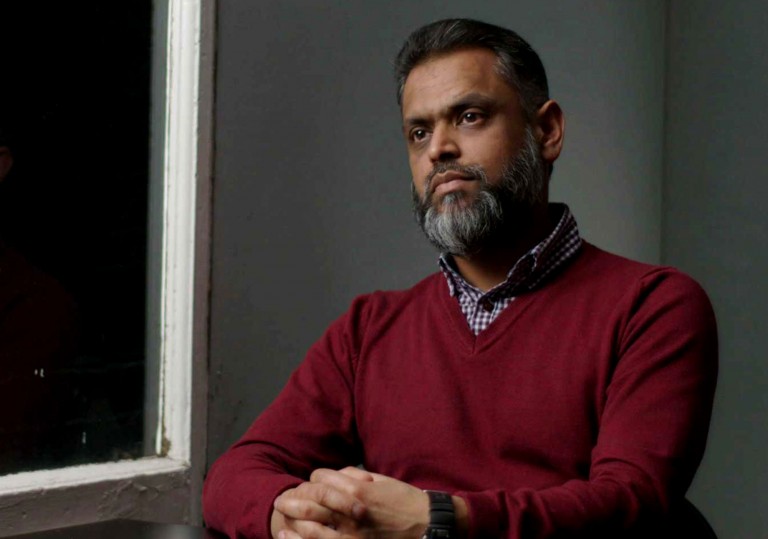 Moazzam Begg remains a controversial figure in the UK.

First half is great, but it falls apart as the makers press their subject too hard.

Could’ve worked just as well as a radio piece.

There’s the feeling that with a customer as slippery as Moazzam Begg, you might have been better off getting an old pro like an Errol Morris involved as his on-camera questioner. As it is, this feature by Ashish Ghadiali lands a few vital punches without ever really cracking through its subject’s implacable, wholly unruffled surface. Not that it is any kind of backroom trial or an attempt at a stitch-up, but it does eventually come across as a missed opportunity.

A casually attired Begg is sat in front of the camera next to a reflective window which simulates the space of an interrogation. The film begins with him delivering a monologue on his life and travels, coolly explaining how he happened to be in the midst of various 21st century conflicts and how his repeated incarceration in facilities such as Bagram and Guantanamo Bay were all entirely unlawful. He offers his interpretation of what the west have defined as “radical Islam”, explaining that what many believe to be a call to violence and revenge, he sees as more politically benign. He also highlights the grim psychological tactics used by anti-terrorist enforcers, and claims that once you’re placed under the spotlight, you’re probably there for life.

The film works when it just involves Begg telling his story from his perspective. It puts the onus on the viewer to decipher the details of his “confession”. Yet the film falls apart in the second half, shifting away from this simple conceit to include the regular interruptions of an unseen interviewer and archive video footage of Begg being interviewed on television. Any attempt at journalistic objectivity falls away as the film becomes a pile on. The subject begins to retreat from view, falling back on the calm rhetorical deflection tactics he’s clearly spent years perfecting.

For a film like this, nuance is everything, and as soon as it begins to feel like its makers are pushing an agenda or searching for specific revelations, it becomes far less engaging. The title infers that Begg has finally opened up about his activities spanning the last twenty years, but the opposite is true. It’s still an instructive work which offers plenty of on-the-ground detail of how bodies such as the Taliban and Al Qaeda operate, but Begg himself is introduced as a mystery and leaves as an enigma.

Moazzam Begg remains a controversial figure in the UK.

First half is great, but it falls apart as the makers press their subject too hard.

Could’ve worked just as well as a radio piece.