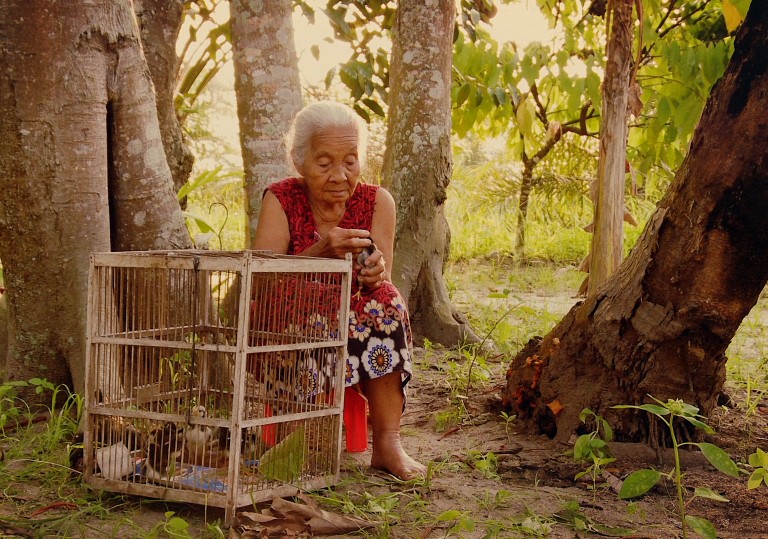 From the director of The Act of Killing.

“I think you are avoiding moral responsibility,” says Adi to the man in charge of the death squad that tortured and murdered his brother, Ramli, during the 1965 Indonesian genocide. “You’re so sexy, I can’t stand it,” sings Adi’s father, a man so tiny and toothless he’s like a child, right down to the nappy he wears and the care he receives from his family.

Adi’s mother, Rohani, is a charmingly creased old woman. She passes the days chopping papayas or looking after her husband or sitting under a tree in the tropical heat. These tranquil scenes are at odds with the ragged state of her insides. She will never, not ever, move on from the memory of her oldest son, Ramli, appearing at the house, holding in his protruding guts, having briefly escaped from a death squad. They had tea before the gangsters came back to finish the job.

Rohani’s testimonies return like an automaton to this day, filling in details of an event that is vividly preserved and incomparably grotesque. She is a woman of few words and it takes the length of the film for the extent of her suffering to come out. When it does, the most staggering thing is how raw it all still is, 50 years on. At least, it is staggering to perceive on an emotional level. Intellectually it makes sense that, to quote another genocide survivor, “the wound is open” when those responsible still rule the country and flaunt their power every day.

The Look of Silence works as a standalone story of life in the heartland of grief, but is enhanced by having seen director Joshua Oppenheimer’s astonishing 2012 documentary, The Act of Killing. This film showed the psychological sommersaults that enable a human to kill another human. This time Oppenheimer – with Adi as his partner – has created a documentary that shows what it means to be a victim of a murderous and still dominant regime. He meticulously lays out the furniture of Indonesian past and present before zeroing in on intimate truths about the people who live there today.

While respecting the complexity of both standpoints, The Look of Silence is not an emotional democracy between killers and victims. It is an anguished tribute to those that suffer brutal injustice abstractly and in the particular devastating scheme of this film. The characters are a mother, a father, a dead son and a live son. Adi was born after his brother died and does not know how his family lived before a shroud of sorrow engulfed them. Having grown up among traumatised loved ones, his desire for justice is stronger than his fear of violence. The mood is hushed. The luxuriant land is captured in awe-inspiring framing as Adi, a door-to-door optometrist, goes about talking to members of the death squad or army. Some have boasted on film about the particulars of his brother’s torture. They are old but not decrepit and full of self-justifying logic.

Oppenheimer moves through the details of a sophisticated story with ambling poise, finding humour in the aching and graceful central family and their idiosyncrasies. Daddy is operating under the belief that he is a teenager. Mummy thinks he is “at least 140.” It’s like Oppenheimer is in love with his subjects and showing through cinematic storytelling how worthy of love they are. Adi’s desire for truth in the form of an admittance of guilt from perpetrators hangs in the air as a potential source of relief. So too does the idea of history repeating itself in the form of the violent silencing of his questioning voice. The spectre of further damage being visited upon this family that we have come to know is unbearable and palpably real. In the supposed ‘safe space’ of a filmed interview, evasion turns to menace. The footage suddenly attains the use of evidence in the case of a disappearance.

The next scene is of Rohani holding a tiny fluffy chick, cleaning out its cage. Her compassion seems like a brave little amulet against the machinery of state brutality. Oppenheimer locates tragedy as personal helplessness in the face of the unimagainable. This is the emotional core of a film whose layers go on and on, providing a challenging alternative to the Indonesian history we see being taught to children in a propaganda-driven classroom. Not only are the victims that Oppenheimer embeds with living with personal demons, they are also struggling to save their experiences from Big Brother-style vaporisation.

The Look of Silence is a hybrid of intellectual and emotional fearlessness that devastates as it educates and could only have been made by one man. Where journalistic immersion and philosophical brilliance meets humanism, there stands Joshua Oppenheimer with his camera.

From the director of The Act of Killing.