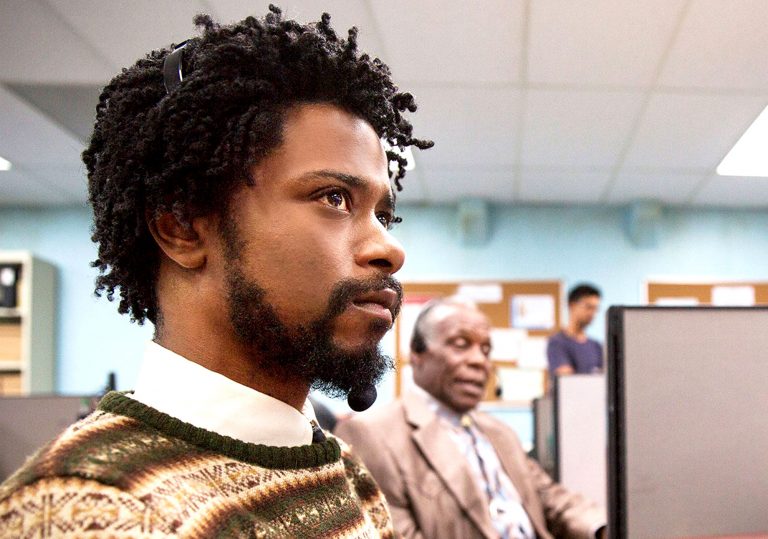 A major hit at Sundance that looks to be taking the sorts of artistic and activistic risks from which most filmmakers cower.

This hard-hitting, go-for-broke envelope-pusher may be light on subtlety but rattles and exhilarates in equal measure.

The most hair-raising comedy of the year, or else the most side-splitting horror movie.

Cassius “Cash” Green, the protagonist played by Lakeith Stanfield in musician Boots Riley’s filmmaking debut Sorry to Bother You, is an Oakland twentysomething with high hopes but diminishing promise. His longtime girlfriend Detroit (Tessa Thompson), an aspiring visual artist and actual sign-spinner, still plays up his high school achievements for morale’s sake. His uncle (Terry Crews) is constantly hounding him for the four months’ rent he’s owed for letting Cash and Detroit hole up in his attached garage. Cash works as one among dozens of expendable, encyclopedia-hawking telemarketers for a shady operation called RegalView, where he receives nothing but hang-ups from nine to five.

It’s only when an elder colleague (Danny Glover) advises Cash to “use his white voice” during calls that the young man’s prospects begin to look up. Cash continually finds and loses himself over the course of Riley’s deliriously entertaining and boldly polemical comedy by using this inner white voice – a pandering, cocksure, and squeaky-clean Dinner Theater squawk that actually belongs to actor David Cross – to become one of RegalView’s highly-coveted Power Sellers, alpha-agents who reside in the lap of luxury by peddling something far more treacherous than book-sets.

From this inspired premise, Riley carefully and confidently constructs a leaning tower of audaciously absurdist satire, which begins as a riotous send-up of code-switching and ends as a scalding and palpably repulsed indictment of the slave labor perpetuated by America’s corporate overlords. Riley, frontman of the long-running, politically-agitating hip-hop collective The Coup (which provided music for the movie, along with the indie outfit tUnE-yArDs), has assembled a dossier of real-world worries and frustrations, from the insidious reach of the prison-industrial complex to the toothless peacemaking of Kendall Jenner’s catastrophically misjudged Pepsi ad, and then inflated them to larger-than-life proportions with mad-hatter merriment.

The result is a warped, war-torn vision of America that’s nevertheless painfully recognizable as our invidious present reality. As a cinematic stylist, Riley has a penchant for pulsating neons and dense frames, but the style never upstages the commentary or the story he so urgently needs to impart. He’s aided at every turn in his mission by Stanfield, a singular character actor who, in just a few short years, has solidified himself as a redoubtable movie-improver, capable of livening up any scene by finding a unique, left-of-centre way to read a line or occupy a frame. (Roger Ebert once formulated the Stanton-Walsh rule, which stated, “No movie featuring either Harry Dean Stanton or M Emmet Walsh can be altogether bad.” A similar principle might be in order for Stanfield.) The actor, with his scarecrow frame and possibly the sincerest eyes in movies, pulls off a similar feat here, playing the role of jester with zeal but also keeping Riley’s film grounded in a place of real human emotion.

Stanfield’s inherent gravity becomes particularly useful as Riley’s script wavers in its focus with the mid-film emergence of a villainous CEO played by Armie Hammer, ingeniously cast as the bearded face of debauched capitalistic exploitation, and a plot reveal that gives grotesque, literal-minded meaning to the term “workhorse.” By its bonkers, tables-turning third act, Sorry to Bother of You has lost a bit of steam, a byproduct of Riley’s more-is-more habit of overstuffing his stew with everything from repetitive party sequences to a tepid love triangle comprised of Cash, Detroit, and a righteous labor organiser (Steven Yeun).

The gags continue to ricochet and if some fail to land, the film at least has the courage of Riley’s convictions to bolster the occasional bulky scene. The narrative threads may fray, but Riley is never less than ironbound in his beliefs, refusing to soft-pedal the moral outrage that roils throughout the film. In Sorry to Bother You, Riley articulates the social anxieties of the times with craft, intelligence, and imagination. For him, the screen is clearly a funhouse, but the gonzo world that has been built upon it can only derive from an artist who sees his country, and all its horrors, with a gaze both sharp and clear.

A major hit at Sundance that looks to be taking the sorts of artistic and activistic risks from which most filmmakers cower.

This hard-hitting, go-for-broke envelope-pusher may be light on subtlety but rattles and exhilarates in equal measure.

The most hair-raising comedy of the year, or else the most side-splitting horror movie. 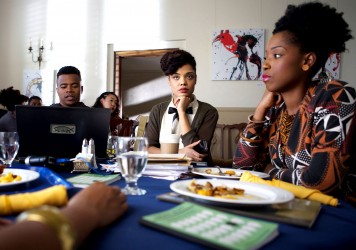 A spiky, combative and wry look at issues of race arising on an American Ivy League university campus.