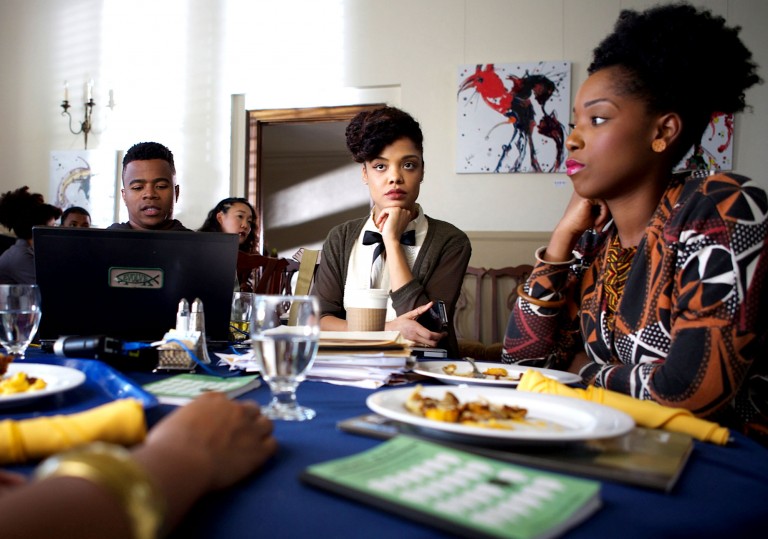 A crowdfunding darling that promises to put race front and centre with humour and attitude.

As enjoyable and refreshing as it is, there’s a certain bite lacking in the delivery.

A spiky, combative and wry look at issues of race arising on an American Ivy League university campus.

So long as American white people tiptoe around appropriating black people swagger, and blacks grit their teeth at insensitive microaggressions, so will the gravity of an unequal society be undermined by an implication that the black experience is a minstrelsy sideshow. And so will there be an audience wanting a release valve in the form of a movie like Dear White People, which set off an Indiegogo firestorm with its blithe, pointed concept trailer. “Dear white people,” its radio DJ announced, “the minimum requirement of black friends now needed to not seem racist has just been raised to two.” “Dear white people – stop petting my hair.”

The crowdfunding campaign for writer/director Justin Simien’s debut hung its hat on those confrontational proclamations, hinting at a gleeful college-campus satire flinging pies in complacently privileged faces. The film, however, is more delicately lower-key, and shares with Spike Lee’s School Daze a desire to investigate contradictions and difficulties in crafting and navigating one’s identity as an ambitious black youth. Samantha (Tessa Thompson), the DJ and film student who promises to “put the black back,” faces accusations of overcompensating for her mixed-race background. Her student politics rival Troy (Bell) feels pressure to conform to aspirant grooming, and makes tainted deals with white fraternities, while living a secret life of sneaking to the bathroom to “smoke weed and write jokes.”

Scrapes are covered in the college newspaper by Lionel (Tyler James Williams), a gay, nerdy, put-upon scribe whose desire not to be pigeonholed makes him seem dubiously unallied. Coco (Teyonah Parris) is the glam, straight-hair mirror of Sam’s Afro revolutionary – instead of resisting, her image fluidly conforms to get ahead, whether flirting with rants to gain YouTube hits or turning a blind eye to racism to go with the establishment flow.

Dear White People begins with a redistricting plan that’s designed to break up a black housing block and builds to a climax in which the snotty white fraternity throws a shocking blackface party, yet it still doesn’t feel like a movie that holds whites to account. Rather it’s a bittersweet reflection on the self-immolating identity crises black people go through when up against a culture that patronises them – how their public personas are strategies, how they privately have mixed-race affairs, how they code-switch.

On the plus side, that makes Dear White People a comedy explicit about the topic of race, peppered with casual asides like, “Don’t worry, the negro at the door isn’t going to rape you.” If it’s less focused than the righteous sketch humour of Hollywood Shuffle, it is still witty, and Simien’s visual style is smooth and accessible, with a warm mahogany grade and a grace to the structure of chapter intertitles and tableaux vivants.

Yet, this is a college film that eschews intellectual or historical referencing for spoon-feeding, alternating from sharp cracks to toothless, soft-edged slop like, “You’re more Banksy than Barack.” And after Ferguson, Tamir Rice, the Eric Garner verdict, and so much other recent intensification in the climate of American race relations, the slick relativism about blacks’ own role in the machinery of black stereotyping feels not quite a vital enough note to rise to the title.

A crowdfunding darling that promises to put race front and centre with humour and attitude.

As enjoyable and refreshing as it is, there’s a certain bite lacking in the delivery.