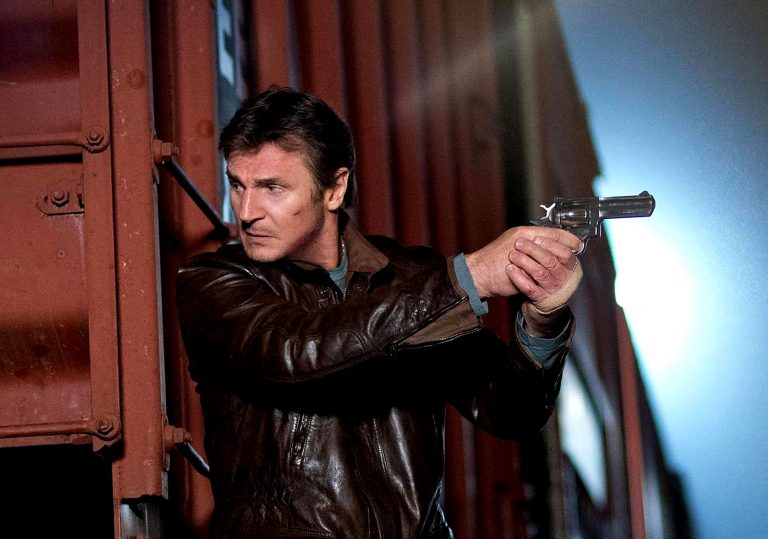 Guess hardcore Neesonophiles will have more cause for excitement.

The best possible version of a late Liam Neeson movie.

Long may the Neeson-Serra accord live on...

The recent live action/animation hybrid movie The Congress postulated on a future where the image of a movie star could be fully digitised via complex motion-capture sensors so they could inserted in films without having to physically be present. A purloined image would be manipulated to order, for whatever function audiences would require at any given time.

It’s a fanciful notion which, ethics aside, seems like it could be feasible from a technological standpoint. The recent career of Liam Neeson would suggest that it some dank Hollywood cellar somewhere, the kit is semi functional and already being tested. How else would the burley, 62-year-old star be able to appear in such a vast proliferation of rowdy, Bronsonesque B-pictures (“drunkies”) which largely draw on the same memorised lexicon of expressions, emotional beats, karate chops to the face and, often, lines of salty dialogue?

If Neeson has been digitally cloned and, while we gawp at him on screen, he’s sat on a beach in Tahiti flanked by Playboy Bunnies, vintage sports cars and wheelbarrows full of Iranian caviar, Run All Night is a film which suggests that the creative team matters. Able Spanish director Jaume-Collet Serra (Unknown, Non-Stop) takes the reigns of this more-than-serviceable, New Yoik, ’70s-style revenge/score-settling thriller in which Neeson plays a one-time mob henchman who has now descended into booze, fags and army-surplus threads. His name is Jimmy Conlon not, alas, Derek Run, or something like that.

His boss, Shawn Maguire (Ed Harris), is old school enough not to want to get into bed with some bouncy Albanians in designer shellsuits looking to broker a major heroin deal, much to the murderous chagrin of his maniac son Danny (Boyd Holbrook). By strange quirk, Jimmy’s estranged son Mike (Joel Kinnaman) observes Danny while engaged in an unfortunate back-alley gun rampage, and so it’s family vs family as Shawn throws everything at his old pal in the name of territorial pride. Naturally, ruthless employment of a particular set of skills help save the day.

While you could spend all day picking holes in the plot and guffawing at the clichés, Run All Night is superior version of these factory-ready action movies that have become so synonymous with late-era Neeson. It’s all down to Serra’s laudably brusque direction and his jazz-drummer’s sense of tempo. The marshalling of information in the first 30 minutes is astounding, as he sets up six characters and various old-guard enforcers (including Bruce McGill!) with the efficiency of a Marine assembling a hand-gun to order.

Perhaps Serra’s most valuable trick is in making the material seem more svelte and fresh than it perhaps is. He achieves this by splicing in impressive bullet-time digital transitions between scenes — these not only help to retain a grasp of which story thread we’re dealing with while naturally dispensing of pace-dulling exposition shots, but offers a neat geographic anchor in the city of New York, where this messy blood feud plays out. They also lend the film a certain sociological heft, as a sudden shift in focus to, say, a group of disengaged bystanders, emphasise a our perpetual closeness to violence in urban metropolitan locales.

A spectacular first half loses some of its lustre as matters take a turn for the conventional in the second. That Jimmy is a serial murderer is handled with kid gloves, its ramifications are deemed less important than him making due remonstrations with his son prior to atoning for his sins. The film nearly stretches to two hours, but would’ve likely made for a far more impactful 83 minutes.

Guess hardcore Neesonophiles will have more cause for excitement.

The best possible version of a late Liam Neeson movie.

Long may the Neeson-Serra accord live on...