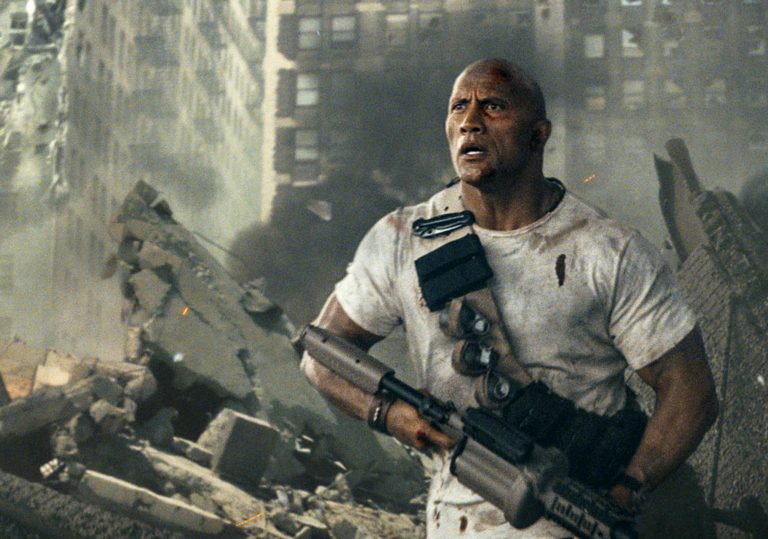 This is exactly what you expect. In a good way.

Big, dumb fun with a whole lot of heart.

The world doesn’t deserve Dwayne Johnson. Humanity has done precious little to merit being blessed with a being as pure of heart and strong in spirit as he. Every time he lights up a cinema screen with a waggle of his iconic eyebrows, every time he saves the world through the power of his hulking biceps and sheer dumb luck, it becomes increasingly evident that he is our only hope. While watching him team up with a giant albino ape named George in order to Save The World, a familiar thought comes to mind: What a time to be alive.

Presumably, this is how people felt when they encountered Rampage for the first time back in 1986, when it appeared as an arcade game created exclusively for US eatery Dave & Busters. Mashing the joystick and buttons to make furious George (or Ralph the Wolf, or Lizzie the Dinosaur) level a city produces the same feeling of carnal satisfaction that one gets watching Ralph’s cinematic cousin effortlessly snatch a helicopter out of mid-air.

But wanton destruction isn’t enough in 2018, where brutal blockbusters are a dime a dozen and all-out war is threatened daily outside of the movies. Rampage’s strength, then, lies not in its zany concept but in its gleeful, big-hearted execution. At the heart of this – at the heart of everything – is Dwayne Johnson’s Davis Okoye. A former Special Ops soldier turned anti-poaching expert turned primatologist at San Diego Wildlife Reserve, he has a special bond with Rampage’s famous gorilla, and desperately seeks to bring the wayward ape back from the mess caused by an industrial accident at the hands of nefarious evil-doers and genetic meddlers Engyne, who are fiddling with animal DNA in order to produce biological weapons.

But even The Rock can’t save the world on his own. So he’s joined by fierce and highly capable Dr Kate Caldwell (Naomie Harris) and rootin’ tootin’ Texan government agent Harvey Russell (Jeffrey Dean Morgan) in order to bring George home. Russell’s a sceptic, but seems wildly amused by the widespread chaos caused by the escaped monkey. “When science shits the bed, I’m the guy they call to change the sheets,” he cheerily tells a scowling Davis.

Elsewhere Malin Åkerman is surly and ruthless as villainess Claire Wyden, while Jake Lacey plays her incompetent, stress-eating younger brother, yet given that the film’s central threat comes from the three mega monsters laying waste to the nation, their presence (and indeed the presence of Joe Manganiello as a stock military hardass) only serves to remind us that humans are the greatest predator of all.

There are some genuinely fun CGI sequences here, including a gleeful subversion of the “It was Beauty killed the Beast” line from King Kong. If Rampage the video game was an 8-bit riff on that classic ape text, then Rampage the blockbuster is a riff on America – particularly the “bomb ’em til they stop moving” approach to both domestic and foreign threats. It’s telling that in Rampage, it’s left to a pair of scientists and one rogue government agent to save humanity (or at least downtown Chicago) in both a physical and metaphorical sense. They do what the military and private contractors fail to: unf*ck the world. The fate of George, a gentle giant with an undeniably human face, is the fate of all of us, and when Johnson signs “family” to his simian son, he means it.

And of course, it had to be Dwayne – America’s musclebound sweetheart, with his natural charisma and reassuring cadence he’s the definition of ‘a safe pair of hands’. Rampage simply wouldn’t work without him. With both our political and eco-systems on the brink of collapse, respite is merely a cinema trip away – for a small fee you can sit in a dark room, relax, and indulge in the fantasy that The Rock can save us all. Or indeed, that we’re worth saving in the first place.

This is exactly what you expect. In a good way.

Big, dumb fun with a whole lot of heart.