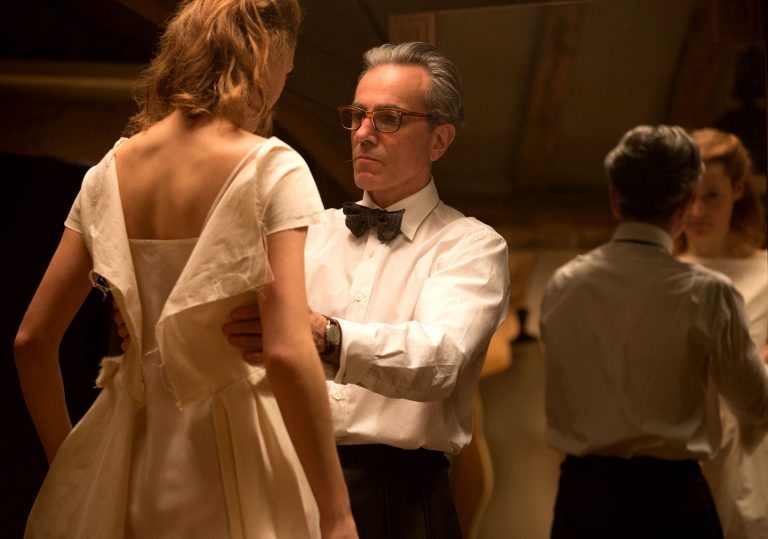 A challenging watch, but also jaw-dropping on more levels than it’s possible to count.

Yet another contender for the hotly contested title of PTA’s best film.

Peel back the exquisitely lacquered layers of Paul Thomas Anderson’s 2012 puzzle movie, The Master, and you’ll find a funny thing. It’s less interesting as an exposé on the inner workings of Scientology, but fascinating as a study of the giddy brinksmanship between two very different men. Though it carefully eludes a finite reading, the film talks about the difficulties of building and maintaining an institution by observing the bombastic emotional contortions within a single, highly combustible relationship.

In his new film Phantom Thread, Anderson is at it again, but this time he’s shifted the camp from his California comfort zone to a sparsely decorous, lightly gothic London and its leafy environs during the 1950s. His specific focus is a prestige couture house managed by reedy-voiced dressmaker (by royal appointment), Reynolds Woodcock (Daniel Day-Lewis).

The fairer sex are, for the maestro Reynolds, little more than bewitching chattel. They are mannequins to be moulded, shifted and disposed of as is his want. All except for his mother, who was and will always be close to his heart. His mind is rigidly compartmentalised, like a fine antique chest of drawers, disallowing sustained romantic love when the urgent business of artistic creation beckons.

Desire, for him, absolutely cannot be a constant – it fades in and out, often appearing as a care-blanket of relief which fits around his punishing work schedule. Order, too, is paramount when it comes to pressing on through the day. He inhales ironware kettles full of Lapsang souchong at breakfast, but woe betide anyone who serves it to him unasked for. He is fastidious to a near-psychotic degree, but cannot comprehend why others might decode his catty refinement as mania.

His sister Cyril (Lesley Manville) is his manager, confidante and henchwoman. She is a terrifying back room operator who chooses her words with venomous precision. As the first order of business, she posts Reynolds off to his seaside bolthole while severing ties with his most recent plaything. 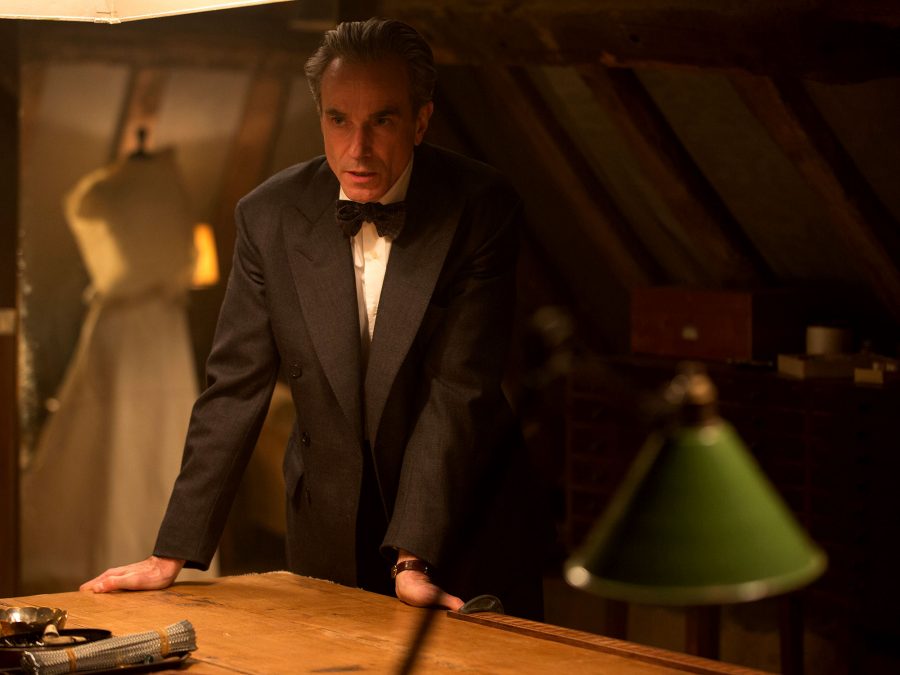 Far from luxuriating in his newfound independence, Reynolds literally falls for the first woman he sees – a simple, sweetly pretty Mittel-European hotel waitress named Alma (Vicky Krieps). His masterful chat-up technique involves having her memorise one of cinema’s most gargantuan fry-up orders. (The manner in which Day-Lewis intones the word “Welsh Rarebit”, where he somehow gives hard emphasis to every letter, is one of the film’s simpler pleasures. He does a similar thing later with the word “cream”. And “sausages”.)

And so the pair float off into the wispy English clouds, their hair-trigger enchantment buoyed by Jonny Greenwood’s rhapsodic score, which combines the dainty strains of 19th century chamber music with the melodic comfort of British light classical. There is music humming in the background of nearly every scene, though Anderson never uses it to enhance or sculpt emotion, but as a constant reminder that this is a movie – a dainty, gorgeous fabrication of real life.

From this moment on, the film is about Reynolds and Alma. The phantom thread of the title could refer to the imperceptible and incomprehensible tie that binds them. Neither seem to know why they have chosen to remain locked in the other’s orbit, particularly as the dark times appear to outweigh the light by an uncomfortable margin. As with The Master, the film plays like an obscure psychoanalytic case study, and Anderson forces you to excavate (like Day-Lewis at the beginning of There Will Be Blood) for meaning.

Alma the dilettante, with her Germanic accent and puffy pink cheeks, arrives from nowhere, lacking either a back story or a sense of future aspiration. Both characters are divorced from history – the script pays scant heed to time-sensitive references or the tittle-tattle news stories of the day. They, too, stray the path from traditional gender norms, him with his effete manner buffeting against her deep, monotone drawl and defined boyish features. And what does Cyril know while all this is happening? Why does she kowtow to the will of her domineering brother? The constant, nagging question of why this is all happening hangs over the film. It torments like a silent spectre cowering in the corner of a bedroom. 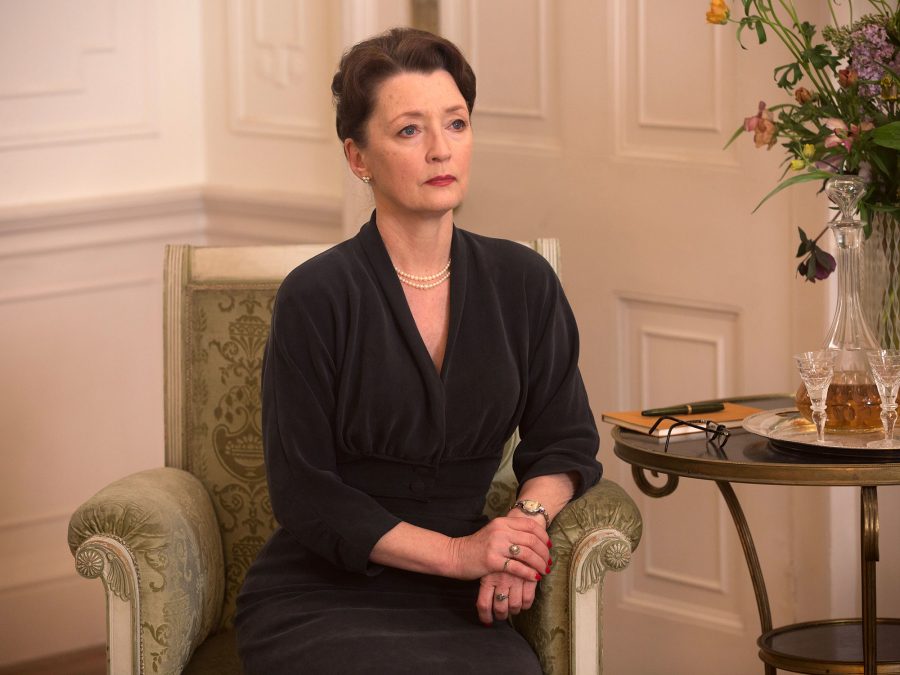 Though this is very much a PTA original in the way it playfully fudges the line between fastidiousness and spontaneity, the film it recalls the most is 1964’s Gertrud, the dour final work by the Danish director Carl Theodor Dreyer. Both films are concerned with the mysteries of love, but employing a unique (and uniquely austere) dramatic approach, they manage to drill right down to love’s masochistic core.

In these stories, love is mutable and indefinable. It’s tragic too – they say we must physically chop a bloody sinew from ourselves to make space for an ad-hoc connection. Reynolds sews secret messages into the hem of his garments, and this phantom threading could be read as his way of imbuing an inanimate object with life or a spirit. He makes miniature statements that no one sees or even knows about. His concept of affection is an private, unreadable inscription on his soul.

The thread is also a lifeline that keeps a person connected to sanity. Alma eventually tethers out the thread as far as it will go because she has nothing left to lose. This is Anderson’s most sedate and humane movie – it chills you in the moment and then destroys you over the long haul. The film’s eccentric, and darkly magical conclusion frames love as a wilful act of hurting another so you can relearn to pity them. Each scene melts into the next through a languorous cross-fade and this cyclical expression of bruising romance plays on until the final curtain.

A challenging watch, but also jaw-dropping on more levels than it’s possible to count.

Yet another contender for the hotly contested title of PTA’s best film.