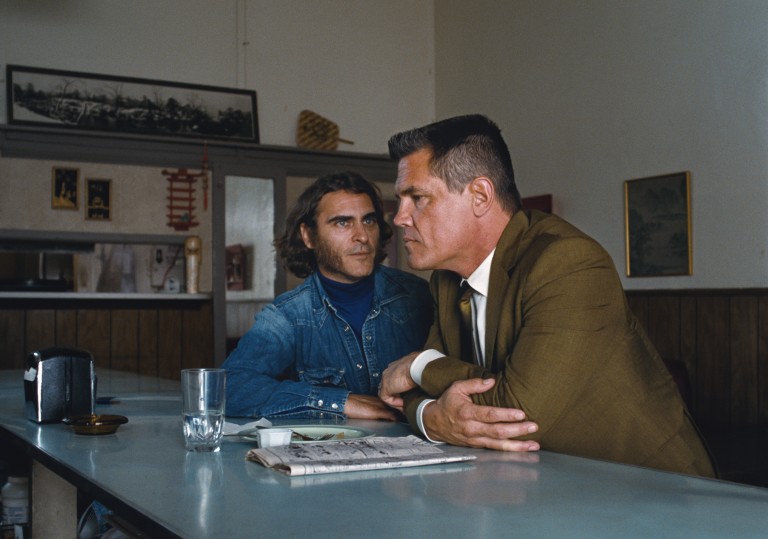 New PTA and the first ever adaptation of a Thomas Pynchon novel. Break out the garlands and streamers.

As rich and strange as we’ve come to expect from the “late” Anderson films, but doesn’t quite achieve the digressive whackadoo majesty of the novel.

A buoyant film about deep sadness and political disquiet, and quite the most fucked-up love story out there.

Could Inherent Vice be considered a late addition to this small wave? Its 1970 setting would suggest so. Yet as with Anderson’s previous film, The Master, it’s hard to say where its true allegiances lie, who it’s slamming, who it’s praising or even if has any inclination towards either. There’s a point in Inherent Vice where it’s commented that a Swastika tattooed on the face of a burley Hell’s Angel is actually the Hindu sign for peace, handily surmising the idea that every “truth” has its requisite, possibly phoney duel reading. Formally speaking, The Master teetered on the experimental, following a character in Joaquin Phoenix’s Freddy Quell who displayed no sense of predictable forward momentum, like a thousand-yard pinball, or an extended cornet wig-out which plays over a surging free-jazz backdrop. Inherent Vice employs a similar tactic, using a nonsense, ultra-convoluted post-noir plotline as a way draw attention away from the film’s thematic sweet meat.

The connection between the two films, however, is conspicuous. Both open on shots of the sea, looking specifically at how the formulation of water (truth?) changes when there’s some kind of human interference. In the former, it’s the swirling Rorschach-like patterns produced in the foamy trail left by a Navy cruiser. In the latter, it’s surfers bobbing up-and-down in the swell, their movement entirely governed by the briny mass beneath them as they wait patiently to ride a wave which could very well wipe them out. They also both end on shots of Phoenix’s character finding love, albeit of a tainted variety. In The Master, it’s with a female effigy made of clumped sand. In Inherent Vice, it’s with Shasta Fay Hepworth (Katherine Waterston), a character who may also be an idealised apparition, a figment of Larry “Doc” Sportello’s dope-addled imagination.

During an on-stage Q&A session following a screening of Inherent Vice, Anderson loosely agreed when the proposal was made that the film is simply about a guy trying to find his old lady. Love: narrative cinema’s irrational variable of choice. One key difference between the book and the film is that Pynchon doesn’t push that idea to the fore until quite late in the game, making the pangs of romance more of a sub-conscious revelation than a concrete intent from the get-go. It’s at the point where Doc spots a white supremacist sporting a kipper tie emblazoned with a crude nudie cartoon of Shasta Fay that his love for her becomes a palpable plot-driver — precipitated solely because of the jealous realisation that she’s been intimate with other men.

The film, perhaps due to its relative brevity, straight away latches onto Doc’s dormant yearning as an occupational driving force, with Jonny Greenwood’s cooing, mock-syrupy score constantly emphasising the fact from behind the softboiled verbiage. It opens with Doc in a state of happy repose in his cabana-like beach shack, waiting for his mint-green rotary phone to ring. Frisbee-eyed hippy siren Shasta Fay slinks by to inform him she’s in trouble, embroiled within a complex inter-family sting operation involving the jealous trophy wife of unpredictable and possibly insane property magnate, Micky Wolfmann (Eric Roberts). She’s only a pawn in their game, but it could have fatal ramifications unless she trades on the residual love Doc has for her to make sure he’s primed as a pro-bono guardian angel.

Talking of love, there’s an argument to be made that Inherent Vice forms a trilogy of films about coiled homoerotic urges. There Will Be Blood charted the strange obsession between a monomaniacal oil baron and a Christian pastor which climaxed in an act of phallic battery with a bowling pin. One of the more obvious (and indeed prevalent) readings of The Master was that Philip Seymour Hoffman’s religious demagogue, Lancaster Dodd, had fallen in love with his muse, Freddy Quell — the surreal notion that he’s able to track him down to a single cinema to speak to him on the phone and invite him to England is, in itself, unfathomably romantic. While this film invites you to focus on the relationship between Doc and Shasta, there’s another love story running concurrently: the one between Doc and his arch nemesis, the surly, flat-topped “renaissance detective” (cf The LA Times), Christian “Bigfoot” Bjornsen (Josh Brolin).

The jocular, tit-for-tat interplay between Doc and Bigfoot is characterised by the old concept that one couldn’t really exist without the other. Bigfoot is the scowling face of fascistic police oppression who’s out to harsh Doc’s mellow, while Doc is the incorrigible hippy-freak who wants nothing more than to play Hacky Sack on the hissing summer lawn of white-bread respectability. The irony is that these two characters are trying to become the other. Doc is a dab-hand at hard police work and hides his natural wiles behind fuchsia-tinted hexagonal shades and a straw sun hat. Bigfoot, on the other hand, wants out of the law enforcement game, moonlighting as a bungling extra in TV cop filler like Adam-12 and heading up crass infomercials dressed in a hippy fright wig. Though Bigfoot often uses Doc (and his property) as an outlet for pent-up rage, his actions are driven by a displaced homoerotic tension, comically depicted in an early scene in which he brazenly fellates a frozen, chocolate-coated banana.

So the ball is rolling and the plot-lines pile up. Every new scene invites a single-serving character whose testimony doesn’t so much shift the goalposts as suggest that Doc has, up until that point, been playing the wrong game. Love crops up once more in the case of surf-rock saxophonist-cum-recovering smack addict, Coy Harlingen (Owen Wilson), whose death has been faked so he can work as an agent provocateur for the government. The deity-like Doc takes heartbreaking measures to reunite Coy with his estranged wife and child, almost as if his own happiness is contingent on theirs. The MacGuffin at the centre of the film is a renovated pirate gallon named The Golden Fang which floats ominously off the California coastline. A tax shelter for a cadre of private dentists? A contraband-smuggling operation? A service offered by a druidic detox facility? Or maybe it’s where the now-missing Micky Wolfmann and Shasta Fay have eloped? Its true nature is unimportant, as The Golden Fang is more a symbol of any and all corporate evil, a symbol which Doc haplessly rails against but is unable to physically reach.

The film is at once frantic and laconic, sprawling and intimate, utterly confusing and wholly straightforward. It’s shot on film, which seems germane considering it’s a story which exists on an exciting frontier between one era and the next. Doc as a character has no discernible bearing on the shifting plates of history. His lifestyle is set to become an anachronism and the embers of the ’60s hippy be-in have all but been extinguished by the murderous antics of the Manson family and the disaster at the The Altamont Speedway Free Festival. The film’s beautiful, sun-dappled final shot mounts its most tantalising mystery, a slightly bewildered facial expression which leaves it to the audience to decide what the future holds for these characters. And yet by the end, Doc has lifted the paving stones and found more paving stones. And under those paving stones, an infinite layering of paving stones. Where is the beach? Did it even exist in the first place?

New PTA and the first ever adaptation of a Thomas Pynchon novel. Break out the garlands and streamers.

As rich and strange as we’ve come to expect from the “late” Anderson films, but doesn’t quite achieve the digressive whackadoo majesty of the novel.

A buoyant film about deep sadness and political disquiet, and quite the most fucked-up love story out there.