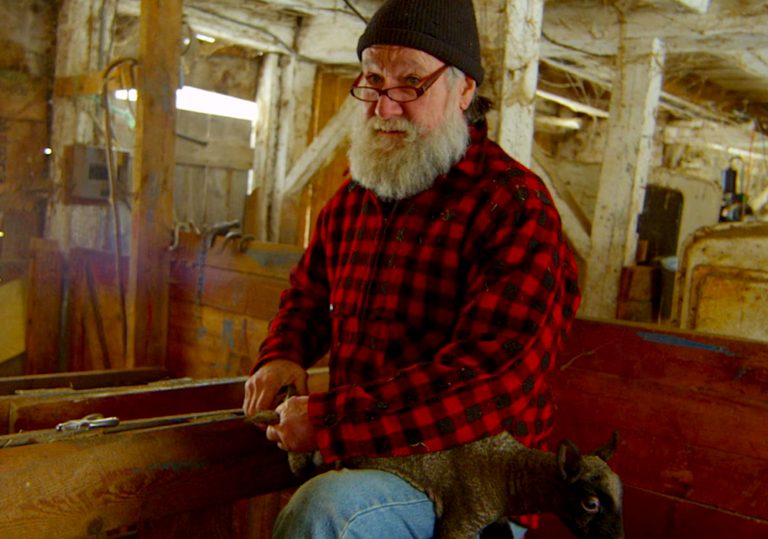 What looks to be a pungent character sketch could also easily be a precious one if not careful.

A spiked window into one man’s ruination that’s tough and striking from nearly every angle.

Perhaps not as radical as it sets out to be, but there’s ragged poignancy to be found throughout Stone’s film – and Dunning’s life.

Tony Stone’s documentary Peter and the Farm tears on to the screen with a single shot that sends us down a rural Vermont road with rapid speed. We slow down, suddenly surrounded by the autumnal hues of nearby trees, as the camera calmly settles on the titular farm, a peeling but sturdy property, owned and overseen by longtime farmer, Peter Dunning. It’s a quick and flashy but fitting metaphor for the push-pull between turbulence and tranquility that have come to define the life we are about to watch unravel.

The 70-year-old ex-Marine, onetime art student and lifelong hard drinker purchased the farm in 1978, transforming it into a fully organic operation. Which is the same way he operates it today – day in, day out, no matter the season. Throughout Dunning’s rocky life, filled with long-gone partners, estranged offspring, and lost ambitions, the only constant has ever been his farm. And, as Dunning declares, it’s killing him.

With his gruff charisma and shaggy, grizzled appearance, Dunning is the sort of self-deprecating, idiosyncratic character that a late-career Robin Williams might have won an award for playing in a darkly comic but probably more conservative film than the one Stone has made here. Chances are, this hypothetical production wouldn’t include the early sequence of Dunning shooting a sheep in the head, draining its blood, and finally shearing it, a moment that serves as an unofficial litmus test for whether or not Stone’s film can be stomached.

Even in such gruesome scenes, Peter and the Farm retains a bemused fascination with Dunning’s quirks and routines, made even more absorbing by Stone and co-cinematographer Nathan Corbin’s gorgeous use of natural light, which turns the sight of three pigs eating slop into a lovely, glistening image. The camera clings to Dunning and he starts off a receptive star, whether slyly declaring battle with the coyotes who keep eating his livestock or showing off his deformed left hand, mangled in a sawmill accident. He readily recounts the farm’s glory days and vividly leads us through the preceding decades, acting as both personal historian and self-aggrandising tour guide. Truthfully, Dunning would be a compelling misfit even if Stone were interested in creating nothing more than a rustic, non-intervening character study. But that’s not the film Peter and the Farm is.

It doesn’t take long for Stone to reveal the tormented underbelly of Dunning’s pastoral lifestyle, personified by a farm that, like Dunning, betrays increased tendencies towards darkness and decay. At first we only hear it, as Dunning passively bemoans the exes who ran out on him and the indifference of his children, who can barely be bothered to pick up the phone. But then it becomes more pronounced: we catch Dunning drinking more and more while detached jokes about his suicidal moods begin to intensify.

In one marvellous enigmatic sequence, Stone records a drunken Dunning snarling at him during a late-night meltdown. But rather than show us this moment in full, Stone films only the farm. His camera glides and pans as images of the house and its surroundings spookily dissolve into one another. As the ranting escalates, Stone shoots the moon from beneath a tree branch, showing through the use of some skilful zooms its surface appearing like jagged patterns in a monochrome kaleidoscope. The point is purely and poetically visual: Dunning’s depression is as natural and deceptive as the earth that encompasses him.

What starts as a semi-hagiographic tribute to a unique way of life slowly morphs into a much grittier portrait, one made all the more affecting by the sense that this entire production might just collapse under Dunning’s volatile impulses, especially as he begins to resent the filmmakers’ very presence. In one scene, Dunning heads to a local bar for an afternoon binge and gets into a screaming match with a young assistant director on the drive back before stopping over at a local liquor store.

Episodes like this pose something of a challenge when it comes to coherently encapsulating Dunning. Stone sticks to a seasonal, year-in-the-life structure that feels increasingly illogical for an unpredictable figure for whom time itself is a burden. The later chapters of the film transition from winter into spring and find Dunning in a more serene and less self-destructive state that might very well be an illusion, but the filmmaking itself grows too hazy to penetrate that surface, upping the natural grandeur but skimping on the insight.

Dunning, for his part, continues to rub up against the expectations of a central documentary subject in thorny and interesting ways; he often refuses to stay still or silent and bitterly mocks Stone’s more benign inquiries. Perhaps everyone involved had just been cowed by him at that stage of the shoot, but the film itself becomes far too diffident to find the complexity it really needs, even as those early, difficult passages still slither in the mind.

Midway through the film, Dunning unravels his bleak philosophy, seemingly without being prompted. “A life is really much more impressive than death,” he sputters. “A life announces itself with force. Death slinks away…” At its most forceful, Peter and the Farm impresses for its unflagging dedication to a crusty renegade who evades the heroic designation that a more formulaic project might pin onto him. This is a reckoning with the self – cracked, sore, and persistent, like a bruise that refuses to heal.

What looks to be a pungent character sketch could also easily be a precious one if not careful.

A spiked window into one man’s ruination that’s tough and striking from nearly every angle.

Perhaps not as radical as it sets out to be, but there’s ragged poignancy to be found throughout Stone’s film – and Dunning’s life. 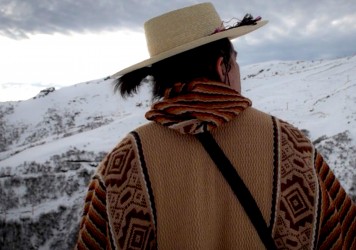