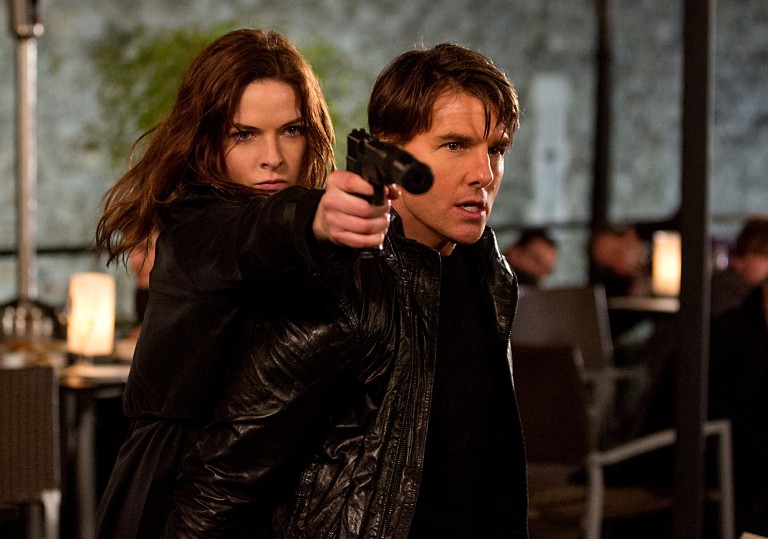 But this franchise feels ready to self-destruct.

One or two seriously awesome moments aside, there's very little of note here.

“We must move forward, not backward; upward, not forward; and always twirling, twirling, twirling towards freedom!” These words are spoken by a slavering tentacled alien named Kodos – disguised as former US President Bill Clinton – during a bewildering public address in the 1996 Treehouse of Horror VII episode of The Simpsons, though they could just as easily be the modus operandi of the Impossible Missions Force and its evergreen top asset, Ethan Hunt.

In addition to doing a lot of twirling (sometimes upward, sometimes forward) Tom Cruise leaps, dives, punches, rappels and – naturally – sprints his way through 131 breathless minutes of Mission: Impossible – Rogue Nation, underlining his commitment to delivering authentic action in an age of soulless CG-everything blockbuster cinema. For a franchise which has always operated according to an encrypted internal logic designed to keep the viewer at arm’s length, it’s telling that Cruise’s hyperkinetic central performance once again provides the focal point around which every auxiliary component – from the standard issue plot to bland allies to an even blander baddie – orbits. An over-reliance on Cruise as the single grounding force has proven both a key selling point and a major shortcoming down the years. Never has this paradox been more evident than in this intermittently entertaining, unexceptional fifth instalment.

It’s not that after 20 years, five directors and as many missions these films have nothing new to offer – an opening airfield set-piece which sees Cruise cling to the side of a military cargo plane during takeoff is one of the most impressive in-camera stunts in memory – but in this instance writer/director Christopher McQuarrie fails to resolve the identity crisis from which Brad Bird’s 2011 entry, Ghost Protocol, suffered. McQuarrie invites us to judge his film next to other high-octane modern actioners, but it’s hard to compare it to anything other than previous Mission: Impossible films. That’s not to accuse Rogue Nation of being overly derivative or void of big ideas, more to say that it spends too long paying lip service to its own legacy without showing the kind of genuine ambition that might enable the franchise to evolve.

That familiar lit fuse from the opening credits may still fizzle with the same white hot intensity, but elsewhere the spark has been lost. Everything from Joe Kraemer’s lousy rehash of Lalo Schifrin’s original score to the irksome roster of recurring supporting characters that includes Simon Pegg’s 00-dork, Benji, and Jeremy Renner’s charmless analyst, Brandt (both of whom you’ll recognise without remembering what they did last time out to merit earning a call back) makes Rogue Nation seem decidedly second-rate. With one exception: the Cruiser.

To call Cruise the film’s MVP would suggest there are others worthy of consideration. In truth Pegg and Renner – not forgetting Alec Baldwin and Ving Rhames, who incidentally is the only actor other than Cruise to have appeared in all five M:I movies – aren’t in the same league (hell, they’re not even playing the same sport). To that end Rebecca Ferguson does a decent job as the seductive double agent with ties to the Syndicate, a sinister terrorist network which Hunt and his decommissioned IMF cronies attempt to take down, though aside from a high-speed motorcycle chase through the backstreets of Casablanca and a knife fight in a London mausoleum, even her performance feels oddly out of sync.

Like its predecessors, Rogue Nation has been precision-tooled to showcase the talents of its resilient lead star. On those terms it should be hailed as an emphatic success. Watching the spectacle unfold, however, you’re struck with the sobering realisation that there is only so long Cruise can continue running, only so much he can keep twirling, twirling, twirling. Because the hi-tech gadgets, the superbikes, the insane stuntwork, all that cool stuff adds up to a poor substitute for a good story. All of which begs the question: where does the franchise go from here?

Since 1996 Cruise has appeared in roughly one M:I movie every four to five years. Unless the pattern is broken (early days, perhaps, but there’s nothing to suggest it will be) that means he’ll be 57 by the time M:I 6 comes around. Having free climbed 2,000ft canyons in Colorado, scaled the world’s tallest building and now soared 5,000ft above the English countryside in a suit and tie, Cruise has nothing left to prove. That’s never stopped him before, but the reality is that at best Rogue Nation feels like a last hurrah, not a radical departure or a return to form. On that note it will be fascinating to see whether Cruise chooses to accept another mission.

But this franchise feels ready to self-destruct.

One or two seriously awesome moments aside, there's very little of note here.