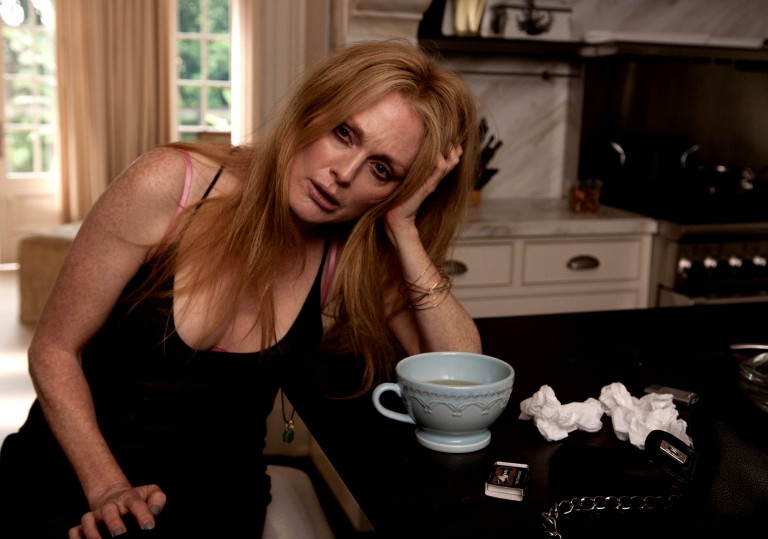 It’s always exciting to welcome in a new movie by David Cronenberg.

This ethereal Greek tragedy is the West Coast cousin of Cosmopolis.

Incest is wrong, you guys. But it makes for a really interesting film.

Diminishing returns are usually the order of the day for filmmakers with long, storied careers. Time tends to sap away that distinctive energy, sagacity and rhythm. The work becomes tatty, dulled with each new iteration. And for those established artists who dare to move away from their signature style – either seeking personal truth or doggedly attempting to outrun obsolescence – the transformation is as rarely as rich, unique or timely as their celebrated past works. With Cosmopolis and Maps to the Stars, David Cronenberg has avoided both of these possible fates and created a pair of astute films which interface with each other in ways that are distinctive from the films (and interests) for which he is known.

So what does Cronenberg’s new flesh look like? Pallid, but with a slight glow. Maps begins with a girl riding a Greyhound bus. Without speaking, we understand that she’s strange in a way that comes down to brain chemistry, not contrarian impulses. Her black satin crew jacket and elbow-length leather gloves accentuate her chalkiness, while her blunt mousy brown bob haircut (that looks like she cut it herself ) makes clear it’s not just her burn scars that are preventing her from being a beauty awaiting discovery at Schwab’s Pharmacy.

Make-up free, the expression on her face is somewhere between starstruck and dazed by her lengthy journey, as she rouses the world’s favourite UV- avoiding leading man, Robert Pattinson, who is snoozing in the driver’s seat of a limo. As he drives her around the city, their forced conversation reveals our intuitions to be fact: Agatha (Mia Wasikowska) has travelled from Jupiter, Florida to Los Angeles after befriending Carrie Fisher on Twitter and becomes an assistant to washed-up C-lister Havana Segrand (Julianne Moore); Jerome (Pattinson) is a buttoned-up writer/actor whose major accomplishment besides making rent is getting a bit part in Blue Matrix, a “post 9/11” sci-fi series in the vein of Battlestar Galactica.

Even though he’s the negative image of the investment banker he played in Cosmopolis (or perhaps the same character, but reincarnated in a lower station as a punishment for past sins), Jerome is the alpha in this pairing of pale meets pale. During their second rendezvous, Agatha makes an unsuccessful pass at him, but as the two continue to serendipitously run into each other, they start a casual sexual relationship whose predatory overtones are immediately apparent, but treated in a devastatingly subtle fashion. That is to say, his true feelings for her, or benefits beyond getting off, are fully masked while they’re together – she never wavers in her belief that he’s a “nice guy,” because he never gives her reason to. When later asked by Havana if she takes her gloves off during sex, or if his friends have met her, Jerome grins and fidgets, demurring, “I’m kind of trying to write a script about it… Everything’s research on some level.”

Such realistic cruelty is often passed over for Big Moments in contemporary satire, and it’s limiting to claim that Maps is merely writer Bruce Wagner’s most recent attempt to excoriate his co-workers and former co-workers in the Hills. (Tonally and spiritually, it shares a great deal with Evelyn Waugh’s ‘The Loved One’, which was also conceived from a failed film adaptation.) Similarly, it’s important to emphasise the paleness of the actors’ skin tones – which applies to all the leads (Olivia Williams, John Cusack, Evan Bird, Moore, and most of all, Sarah Gadon) – not to put forward some racial purity agenda or apologise for yet another independent film that has no substantial non-white characters, but because if this were deeply invested in a satirical edge, everyone would be sprayed head-to-toe in fake tan. Instead, the ghostly colour of the actors reinforces the idea that the dead children Agatha’s brother Benjie (Bird) starts seeing, and Clarice (Gadon), the returning spirit of Havana’s mother, are just as real as the troubled actors they’re visiting upon.

“As Moore sobs and contorts her face in new and horrifying ways, it seems likely someone sent her a link to the eight-minute supercut of her crying in other films”

In the world of Maps, incest – which can be understood as a manifestation of narcissism – has given Benjie, Agatha, and Havana this special sight. Wagner’s longtime affiliation with Carlos Castaneda’s Cleargreen corporation and his relationship to mysticism suggests that their role in the narrative is literal, not hallucinatory. While Agatha and Benjie attempt to block it out with pills (some prescribed by doctors, others not), Havana tries to work through it with a special home visit reiki/regression therapy/lifecoaching/high impact massage technique practiced by Agatha and Benjie’s father, Dr Stafford Weiss (Cusack). Cronenberg’s camera also feels like it has popped a Xanax, never getting too close to the emotional gore.

Though Cusack doesn’t have the right gravitas or vocal timbre for a TV shrink who has an aphorism for every situation, the salvation he has on offer is intentionally dull and generic, an anti-gestalt: he’s a de facto leader for those who are perpetually stuck in dysfunctional cycles, and is not long from being deposed by someone equally unremarkable. Actually solving the problem of substance abuse or the need for attention and approval would kill the market; the weight loss and beauty industries figured this out a long time ago.

Along with sharing a father figure in Dr Weiss, Benjie and Havana share a sister in Agatha. Havana’s feelings towards her, augmented by whatever semi-legal ’scrips she’s downed that day, run the gamut from pitying “motherly” concern to Maleficent-style jealousy and punishment; the moment which best sums up their highly unprofessional professional relationship is when Havana, constipated and high as a kite, gives Agatha sex advice while on the toilet. It’s essentially a more realistically disgusting version of the all-female bathroom pow-wow that featured in the first episode of Lena Dunham’s Girls.

Known more for being sexually abused by her mother than as an actress, Havana’s greatest desire is to literally become her mother Clarice, playing her (despite being far too old) in a behind-the-scenes remake of her ’60s-era career-defining role. Hollywood plagiarises itself and – as the ghost of Clarice insists between reciting lines of Paul Éluard’s 1943 poem ‘Liberté’ – the molestation charges are borrowed from somewhere else. Havana’s response is histrionic and show stopping. As Moore sobs and contorts her face in new and horrifying ways, it seems likely someone sent her a link to the eight-minute supercut of her crying in other films, or Barbara Steele in Shivers.

Benjie, a neophyte Hollywood fuck-up, has already been to rehab at 13 and blown through the seven-figure paycheques he earned aged nine as the star of the Bad Babysitter franchise. As the recovering alcoholic who is now confined to sipping giant cans of energy drink at parties, he vomits after a (necessary) bootlicking meeting with a group of studio executives and can barely connect with his friends; sobriety, it turns out, is a never-ending series of defeats. But his reaction to the Éluard-quoting ghosts that visit him make clear that he’s a Shia LaBeouf, not a Justin Bieber – the increasing violence and irrationality to his manic outbursts belie not just ego, but a sociopathic failure to understand that other people are, well, people. His coldness is perhaps the most disturbing element to Maps, and when reunited with the fatalistic Agatha, their combined efforts result in an all-consuming, fiery Greek tragedy.

Though some things that befall the characters are clearly evitable, it’s likely that these damned characters never had any agency in the first place. Agatha is the only one who sees things clearly.

It’s always exciting to welcome in a new movie by David Cronenberg.

This ethereal Greek tragedy is the West Coast cousin of Cosmopolis.

Incest is wrong, you guys. But it makes for a really interesting film. 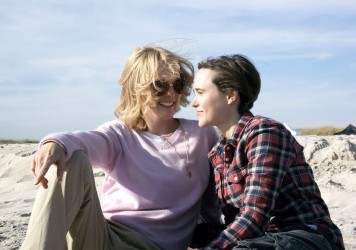