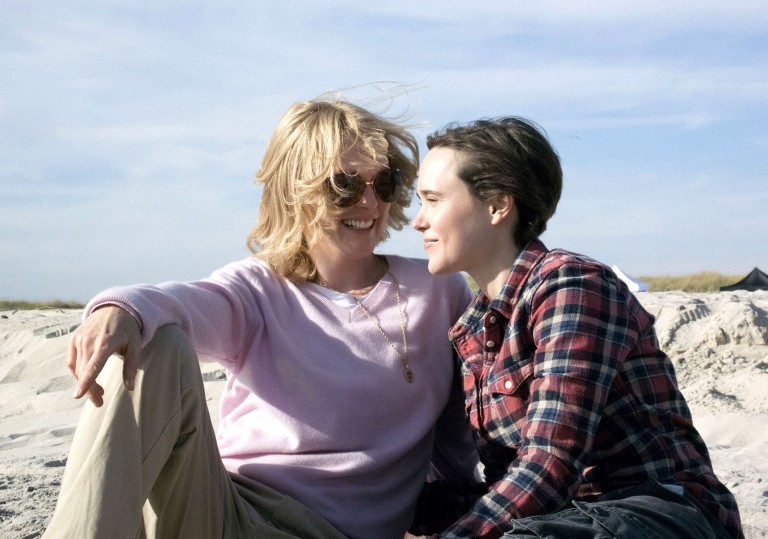 Julianne Moore and Ellen Page in a civil rights drama? Count us in.

Another worthy issues movie just in time for Oscar season.

Why does Michael Shannon get the best written part in a lesbian drama?

In February 2014 actor Ellen Page gave a rousing, inspirational and moving coming out speech at the inaugural Thrive conference. She spoke of the “pervasive stereotypes about masculinity and femininity that define how we are supposed to act, dress and speak” and how they, “serve no one”.

She also talked about the courage it takes to stand up to these norms. So the appeal of this project based on a true story which also takes inspiration from an Academy Award winning documentary by Cynthia Wade in which she gets to play a gay woman fighting for the right to her dying partner’s pension is clear. Unfortunately, despite the refreshing representation of women, the Peter Sollett’s Freeheld fails to capture many convincing or stirring moments and plays out like an average TV movie. Passable at best and condescending at worst, it’s a 50-shades-of-beige retelling of a galvanising moment in cultural history.

When Detective Laurel Hester (Julianne Moore) is informed she has stage four lung cancer she prepares for the worst to ensure her partner Stacie Andree (Page) is taken care of financially when she passes away. But things don’t prove to be that simple due to the straight, all-male New Jersey Board of Chosen Freeholders in Ocean County, New Jersey, who refuse to break with tradition and grant Laurel her dying wish. It’s a case that made headlines with the board eventually setting a new precedent for gay-rights marriage.

With a documentary already explaining the facts behind the case, the question of what fresh new ideas this dramatisation bring to the table remains. The answer is very few. Screenwriter Ron Nyswaner delivers a stale, passionless script that doesn’t dig deep enough into Hester and Andree’s relationship; they meet at a volleyball game where they eye one another up over the net, go on a date where Hester whips out her pistol on a gang of lesbian-hating thugs and then they head for a spot of fishing on the beach. A year later they’re living together.

The lifeless direction and frankly embarrassing action sequences which add nothing to the story other than repetitively attempting to remind the audience that Hester is as capable as any of the male officers on the force drag badly. Nyswaner neglects to forge an engaging story and ends up relaying the facts in a mechanical manner. The romantic dynamic between Page and Moore is flimsy, with Moore sharing more chemistry with Michael Shannon who plays her work partner Dane Wells. Then in marches Steve Carrell, draining away any small amount of poignance as activist and founder of Garden State Equality, Steven Goldstein. His performance smacks of falseness.

Once Hester’s cancer treatment starts and the case against the freeholders begins, things take a turn for the moving. The reality of Hester’s chemotherapy is tough to endure, with Moore turning in a restrained but affecting turn. But by this point, with hardly any investment in the thinly drawn lesbian characters, Nyswaner leaves it up to Shannon’s everyman to rally the troops and whip up the film’s few inspirational if somewhat cheesy moments.

Julianne Moore and Ellen Page in a civil rights drama? Count us in.

Another worthy issues movie just in time for Oscar season.

Why does Michael Shannon get the best written part in a lesbian drama?