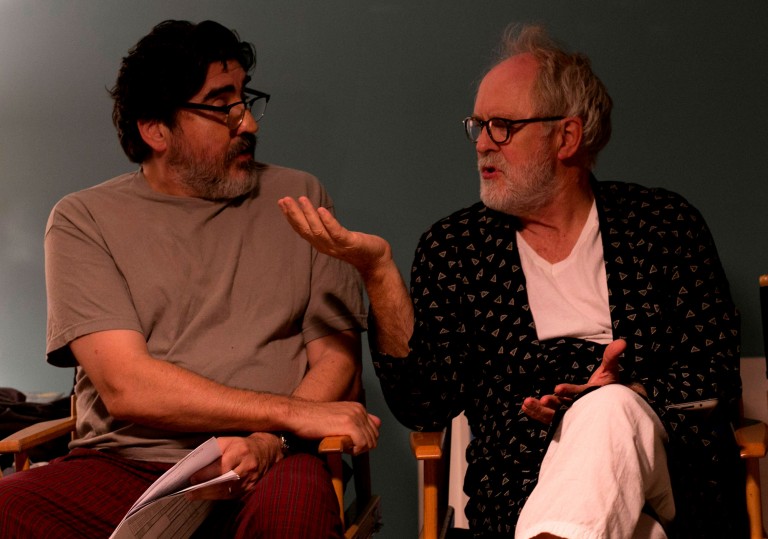 Though he seldom smashes it out the park, there’s enough reason to believe Ira Sachs will do so very soon.

It is enjoyable, if never really all that believable.

Would love to see another movie about these two characters.

The title of this new movie from director Ira Sachs offers an extremely banal observation, perhaps hinting at an oblique subtext which states that love is such an irreducibly illogical beast, that making profound statements about its earthly application are futile. You could almost read it as a kind of free pass to get away with lots of irrational human behaviour. Because hey, didn’t you hear? Love is strange. You can’t account for it. Jog on.

Alfred Molina’s George and John Lithgow’s Ben wake up, take a shower, each put on a vintage three-piece suit and bolt down to their local registry office in Manhattan to be wed. After years of domestic companionship, the knot is finally tied for all to see, though Ben’s Catholic school paymasters now have a major conflict of interest shoved under their hypocritical noses.

Fired from his position as a music teacher and choirmaster, the pair are forced apart until new, affordable lodgings become available. George heads to his now ex-neighbour’s sofa, a young gay couple who like to party hard and, with their police uniforms (they are both cops), slyly reference The Village People. Ben, meanwhile, accepts the strained hospitality of his niece, Kate (Marissa Tomei), who doesn’t really have the space or the patience to have him around.

Sachs’ film is content to sit and watch as this trying situation plays out, leaning back on the truism that life is tough when you’re separated from your true love. One doesn’t like to pick apart plot points in serious, passionate movies such as this, but it’s hard to believe that these mature newlyweds would opt for such drastic measures over, say, renting a cheap hotel or opting to move a little further out from the city centre. Their estrangement sits awkwardly as a dramatic construct which allows Sachs to study their behaviour patterns while under the dark cloud of sullenness, and even mortality.

The film borrows its set-up from Leo McCarey’s 1937 masterpiece, Make Way for Tomorrow, in which an elderly heterosexual couple undergo similar later-life indignities due to financial woes. Yet that film gained credibility through historical context and the realisation that these doddery characters really had nowhere else to go. Ben and George are worldly types, and the proposal that their relationship can be co-opted as a bargaining chip for long-term happiness rings bogus.

Sachs picks up on small details such as what it’s like being a loose-limb in a room where the drama doesn’t involve you, and there’s an interesting and subtly erotic subplot examining Ben’s efforts to paint a portrait of a young boy who is close friends with Kate’s gawky son. Yet, as we see in the film’s latter stages, the A-material here is the relationship between Ben and George, and all the best moments involve their honest, lightly lovey-dovey interactions. The counter-intuitive plot of the film is about what it’s like when these characters are apart. It’s a dramatic equation that Sachs sadly doesn’t manage to solve, but it’s bittersweet fun to watch all the the working out he does along the way.

Though he seldom smashes it out the park, there’s enough reason to believe Ira Sachs will do so very soon.

It is enjoyable, if never really all that believable.

Would love to see another movie about these two characters.