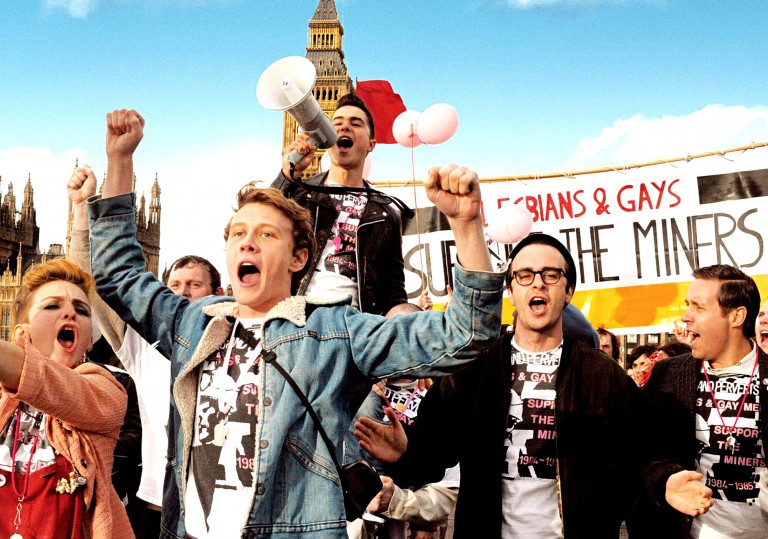 The miners and the gay community united in the ’80s?!

Uplifting social realism. Whatever next.

A dose of tolerance medicine that tastes good.

West’s Jonathan is in the valleys of south Wales with the tin-pot activist alliance, ‘Lesbian and Gays Support the Miners’. His character is one of a small ensemble, led by the passionate and compelling Mark (played brilliantly by Ben Schnetzer) to fundraise for and later befriend the striking miners. Early scenes in London show Mark becoming fascinated with the miners, seeing in their anti-establishment fight for recognition an echo of his own battle. “What’s the point in supporting gay rights but no one else’s rights?” he says from a podium in Gethin’s (Andrew Scott) bookshop HQ. Soon they’re all shaking coin-buckets and hitting the road to Wales with the proceeds.

The fusty details of an ’80s underground hangout are so good you can almost smell the yellowing books. Costume design ranges from activist chic (Mark has a way about him) to total square (George MacKay’s Joe is possibly still being dressed by his mam) to grim ’80s jumpers (sported by all miners). This makes events feel credible without ever overshadowing the writing. First-time scribe Stephen Beresford cracks open a rip-snorting real story which folds in enough overt, insidious and institutionalised homophobia to convey what LGSM is up against. AIDS lurks in the background too. The biggest achievement of Beresford’s script is to know when to take his foot off the pedal on the main story in order to let us see and feel the social fabric of the era.

Using interviews with the real villagers from the Dulais and Swansea valleys, Beresford shows the tension that greets the LGSM on arrival. Even as relations harmonise, the threat of an attack from the most prejudiced villagers never entirely fades. Yet, once in Wales, the comic elements begin to take off. Some humour occupies wink-wink, nudge-nudge territory. Witness a doddery old dear with loads of questions about lesbianism. Even these broad laughs are played with commitment and within such a meticulously constructed social reality that it’s hard not to be swept along.

When its respite from the combat of human rights activism, humour attains the role of essential relief. Inasmuch as they are bones thrown to amusement-hungry audiences, jokes work within this narrative as glue between characters. Wit is the currency that enables Paddy Considine’s adorably sheltered Dai to thrive in a drag club.

It’s rare to get such a heartfelt story of solidarity between people that on the surface are from such different worlds. Warchus has assembled a stellar cast to play this mélange. They sing their parts nicely as individuals but gloriously as a chorus.

The miners and the gay community united in the ’80s?!

Uplifting social realism. Whatever next.

A dose of tolerance medicine that tastes good.