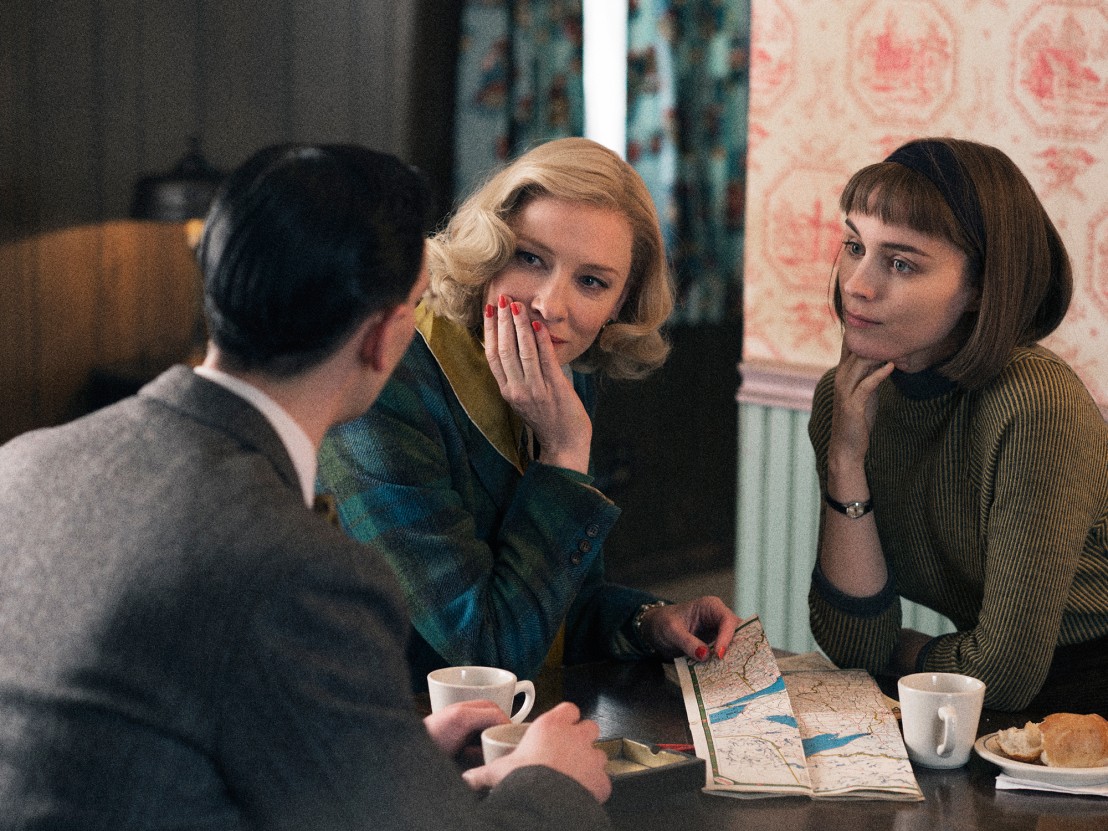 We’ve taken a look back over a century of cinema and selected 20 important films that explored gay representation on screen. Our choices range from the silent era, where this was a love that (literally) couldn’t be spoken of, through to a neo-western which brought same-sex love to a mainstream audience. The countdown starts below, then check out the second part.

In 1919, long before 1927’s The Jazz Singer, Different from the Others already pointed to the power of sound, and did so by toying with the medium’s limitations –or should we say, unique proprieties? – of silence. Indeed, silence here speaks volumes, but can also become stifling. It reveals the necessity of speaking voices and communication. Paul and Kurt discover their mutual appreciation in exchange of looks only. Kurt’s gleaming eyes stand out in a classic, luminous close-up against a black curtain while he stares at his crush playing the violin. Each facial expression is meaningful, communicating overwhelming and conflicting emotions. When Franz, a man Paul was trying to seduce, extends his open palm towards him, Paul does not need to hear an explanation: he knows he’s been blackmailed. The silence of both men reveals the shame and taboo surrounding homosexuality. Yet when the couple seeks the help of a sexologist, intertitles multiply as he explains their sexuality as normal but misunderstood by society. This surprisingly modern approach – despite a few obviously antiquated points – cries for the help of sound to break the silence and start a conversation about the reality of homosexuality. Manuela Lazic

Few filmmakers understood the power of the close-up like Danish master, Carl Dreyer. Michael, one of his great early works, is the embryo of many experiments to come. It’s a desperately sad tale of unrequited love, charting the one-sided relationship between a painter and his eponymous, ungrateful muse. Dreyer piles on the humiliations afforded the older artist as Michael runs off with a penniless Russian princess out for all she can get. The artist’s skills dwindle without the young man by the side, yet finally produces his masterpiece out of pure heartbreak: “The work of a man who has lost everything.” Implicit though the affair may be, the film was way ahead of its time (and perhaps predictably unfavourably received), and the dignity with which the artist bears his tragedy is nothing short of shattering. Matt Thrift

“I was rather surprised,” says an audience member after the all-girls boarding school production of Don Carlos in Mädchen in Uniform,“Schiller can be rather frank.” It’s a self-aware acknowledgement of the all-too-apparent on the part of Leontine Sagan, a filmmaker forced into exile soon after her (banned, ‘decadent’) debut was released in Germany. “All the girls love Fraülein von Bernburg,” not least Manuela, a vulnerable new student whose obsessive case of amour fou takes her to the brink of tragedy. If the school’s demands of “total discipline” frame it as a microcosm for wider political readings, its ground-breaking depiction of same-sex attraction between teacher and student pulls no punches, not least in an erotically-charged bedtime kiss. Remade with Romy Schneider in 1958 by Géza von Radványi and swapping out context for symbolism, the original remains the more potently expressive article. MT

Femininity in 1930s America was not as free as it is today. Society left women of all classes with little independence when choosing how to behave. All had better be attractive to men, using their feminine attributes either with exciting vulgarity or suggestive restraint. Josef Von Sternberg’s Morocco is striking in how it responds to this quiet oppression with conservative notions of marriage, success, desire and sensuality. Amy Jolly (Marlene Dietrich) surely exudes femininity, yet it stems from her independent spirit. Moreover, she does not stop at typical female behaviour when trying to impress, instead exploring her masculine side by wearing a suit and bowtie, walking nonchalantly and giving the eye to both men and women. Yet she is never fooled by the kindness of men attracted to her physique. The only man she desires is legionnaire Tom Brown (Gary Cooper), for not only does he find her blurry sexuality exciting, he also accepts it unquestionably. Bored by easy local women attracted to his status, he himself isn’t the clichéd, hyper-masculine soldier. For him, Amy will at once further resist the pressure to marry well, and redefine her femininity into a more compliant form in order for this romance to better face the tough conditions of the times. ML

It’s the job of the femme fatale to create castration anxieties among male characters and audience members, anxieties that are then obliterated at the end of the film by her being punished in some way. In contrast, Gilda (Rita Hayworth) suffers throughout Charles Vidor’s 1946 film, and not because of her promiscuous behaviour. On the contrary, she suffers because her love for a man, Johnny Farrell (Glenn Ford), is not reciprocated. This creates an interesting spin on the classic femme fatale, as Gilda only pretends to be one in the hope of making Farrell jealous. The film focuses on her unsolvable pain and frustration, not out of pure film noir sadism, but as a clever way to indirectly indicate the reason why Farrell doesn’t love her: he is attracted to Gilda’s husband, Ballin (George Macready). All of Gilda’s attempts to make Farrell jealous only annoy him, because Ballin expressly asked him to keep an eye on her. Although Gilda is the title of the film, she doesn’t represent its heart. Neither of these two men love her; she is only used as a vehicle for them to express their forbidden love to one another. Elena Lazic

Despite removing any explicit reference to the protagonists’ homosexuality present in Patrick Hamilton’s play, Alfred Hitchcock transforms Rope into a never-ending parade of fetish objects, the most glaring being the famous sequence-shot visual scheme itself. The film’s one hard cut, coming straight after the credits to take us inside the apartment – and face-to-face with the murder – presents us with the first of a series of ceremonial objects that both John Dall and Hitchcock’s lens will fawn over and caress for the next 80 minutes. “It’s a museum piece now,” says Dall, picking up a glass, “Out of this David Kentley had his last drink.” A glass. A chest. A length of rope. A gun. All are re-purposed in one way or another, twisted fabrications of function and meaning. Hitchcock invests his film about surfaces with a devilish wit, toying with ideas of representation every step of the way. MT

The nucleus of so many of Howard Hawks’ films is a group of men at work. From the jaded airmen of Only Angels Have Wings to the ragtag band of chancers travelling upriver in The Big Sky, their lives are consumed by work, and thus their fraternal dependence on one another verges on the spousal. With 1953’s Gentlemen Prefer Blondes, Hawks offers an ingenious reversal of gender roles, with showgirls Lorelei (Marilyn Monroe) and Dorothy (Jane Russell) as the central characters, bound by fortune to navigate mid-century romantic mores. Their potential paramours are ineffectual caricatures, and Hawks makes no effort to hide the fact that the romance is pursued solely for material comfort – a notion made explicit with Monroe’s barnstorming rendition of “Diamonds Are a Girl’s Best Friend”. The only pure relationship in the film is Lorelei and Dorothy’s, a pair joined by circumstances perhaps, but bound by unshakeable affection. Craig Williams

Queer icon Doris Day reached the apogee of her queer iconness when starring as tongue-twisting tomboy Calamity ‘Clam’ Jane in David Butler’s camp musical masterwork from 1953. Whip-cracking away right from the exhilarating opening salvo in which Clam’ cavorts into town on the Deadwood Stage, it’s a film which positively drips with queer double entendre and saucy intimations, constantly making you wonder whether its makers were aware of the subversive subtext. Aside from the fact that the roughest, toughest town in the Old West is peopled by thigh-slapping good-ol’-boys who like nothing more than to watch cabaret shows, the highlight of the film is the ‘A Woman’s Touch’ sequence, where Clam is taught to suppress her manly instincts and become happy housewife to Allyn Ann McLerie’s dominant Katie Brown. And that’s all before Day gets to sing the film’s chart topping ballad, ahem, ‘Secret Love’… David Jenkins

Unscrupulous, libidinous and macho criminal men in cinema haven’t surprised anyone in a long time. So it’s a shame that fifty years after its original release, the badass, kickass women of Russ Meyer’s Faster, Pussycat! Kill! Kill! remain shocking and unique in the extremity of their ruthlessness and gender play. More than a simple experiment in reversing gender roles, the film grapples with conflicting versions of womanhood, from innocent virgin to whore. It is only Verla (played by the striking Tura Satana) who is ready to wholly assume the principles usually attributed to men – a taste for money, speed, violence and women. Indeed, she’s the only one in the pack to ready to reject the male influence completely. Her tragic end does not sign the customary neutralisation of an independent woman, but rather the expected termination of the bad ‘guy’.
EL

If the genius of Claude Chabrol can be reduced to a single notion, it’s the way he appropriated the milieu of his century’s great crime novelists, and imbued it with a psychological exactitude which ran counter to more conventional genre films. The central female pair of Les Biches – Stéphane Audran and Jacqueline Sassard – are, on the surface, a product of salacious pulp impulse. Audran glides through her opulent villa, slinky and insinuating. But Chabrol’s profiling betrays their fragile position in the world. Theirs is a tenuous intimacy, furtive yet palpable. While it may lack the chilling resolve of his 1995 feature, La Cérémonie, or the boundary-pushing friskiness of 1960’s Les Bonnes Femmes, it brings steely purpose to material that is constantly flirting with baser impulses. CW

Check out part two of our 20 film countdown of great queer cinema.