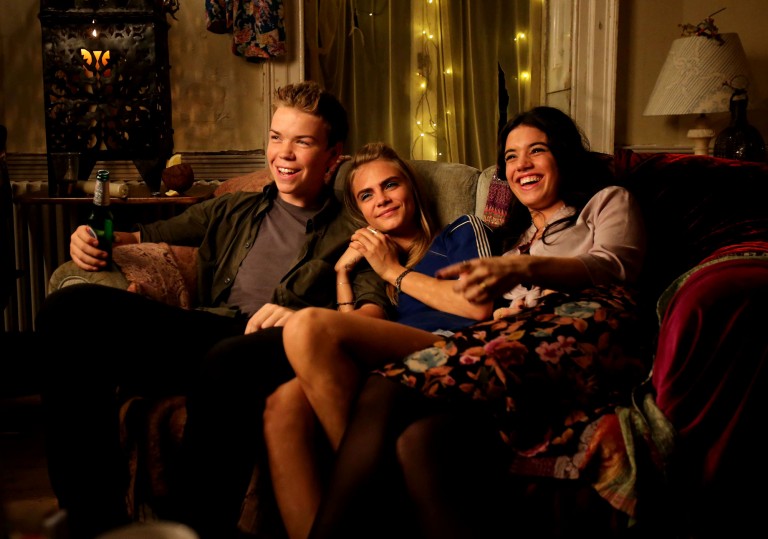 Will Poulter’s presence alleviates some of the tedium.

Cara Delevingne and Will Poulter star in this bland bohemian coming-of-ager from Chris Foggin.

When it comes to coming-of-age films, the matter of which ones become cultural touchstones is quite often down to luck. It’s a hard nut to crack, but generally speaking the most enduring tales of the pitfalls of young adulthood are those with a strong emotional core, an ensemble of fully fleshed-out, interesting characters and realistic scenarios that don’t feel feather-light or superficial.

Despite initial promise thanks largely to the charismatic presence of stars Will Poulter and Cara Delevingne, Kids in Love never comes close to being a standout entry in the genre. As a portrait of one young man’s existential crisis during his gap year, Chris Foggin’s feature debut is about as riveting as most menial jobs people find themselves stuck in during that pre-university period, only with a flower child sheen to make things that bit more insufferable.

Jack (Poulter, the film’s only endearing element) is set for a trip to Asia with best friend Tom (Jamie Blackley) before a pre-ordained path to lawyer life at university. He’s not really feeling the whole adulthood thing (“Sort of hope it turns into more of a gap life, really”), and that’s before he has a chance encounter with enigmatic beauty, Evelyn (Alma Jodorowsky), a free spirit who introduces him to a hidden side of west London. The hedonistic lifestyle Jack is drawn to also includes flamboyant ladies’ man, Cassius (co-writer Preston Thompson), a pair of flighty sisters prone to changing their names (Delevingne and Gala Gordon), and Evelyn’s untrustworthy boyfriend, Milo (Sebastian De Souza, the other co-writer).

Putting aside the representational problem of having POC characters be literal set dressing (one of the film’s strange attempts at humour is a mute man on a sofa who’s so high he appears to be dead), not to mention a transphobic joke within the opening minutes, the major problem with Kids in Love is that it’s a film that feels threadbare and tired before it’s even got through its first big party scene.

The soft focus cinematography is clearly designed to invoke dreaminess but instead just emphasises the lack of weight to any of its characters, story beats and commentary on the transition to adulthood. It languishes in cliche, with characters that never shut up but have nothing to actually say.

Will Poulter’s presence alleviates some of the tedium.