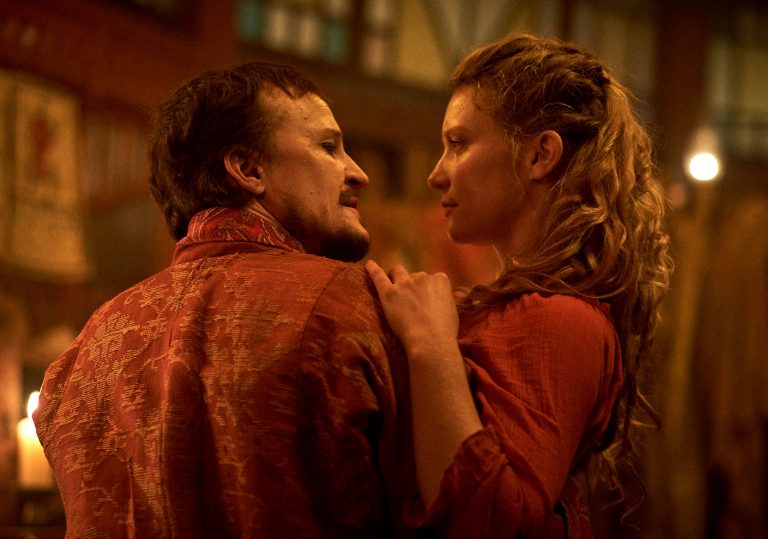 Mia Wasikowska is a magnetic screen presence who tends to make interesting choices.

A feminist subversion of the puppet-show that comes into its own as a delicious, dark and atmospheric fairy tale.

Leaves a pleasurable shudder running through your body.

Mia Wasikowska turns the tables on her male oppressor in this subversive take on the traditional marionette show.

Australian actor Mirrah Foulkes has performed for a clutch of her country’s most interesting exports, having appeared in Julia Leigh’s Sleeping Beauty and husband David Michôd’s Animal Kingdom, as well as Kiwi director Jane Campion’s Top of the Lake. She steps behind the camera for her first feature as writer/director in order to subvert a British cultural institution: the Punch and Judy puppet show.

With its roots in Italy, Punch and Judy’s first iteration in the UK was documented in 1664 by the diarist Samuel Pepys and has endured to this day as a form of family entertainment, which is curious when you consider the basic premise: a deranged puppet beating other characters with a stick followed by the self-satisfied punchline, “That’s the way to do it!” In recent years councils have stepped in to prevent this show being performed at schools, concerned that Punch is not a good role model for impressionable young minds.

Foulkes does balanced work here, both retaining the ingredients of her source material and melting them down into a twisted live-action fairy tale that is distinctively her own, with the magnificent Mia Wasikowska acting with poised fury as Judy, a female avenger of male violence. Welcome to the fictional 17th century town of Seaside, where mud mingles with the blood of women hung as witches, all sent to the gallows by the baying mob who rule the place. It is here that Punch (Damon Herriman) and Judy perform their marionette show, he celebrated as the star craftsman even though she is truly pulling the strings.

Their domestic life is coloured by an ominous sense of impending violence. It’s for good reason that Herriman has played murder-inciting cult leader Charles Manson twice this year (in Once Upon a Time in Hollywood and Mindhunter). His tiny eyes in a devilish face are coupled with a seething twitchiness, as Punch broods on thwarted ambitions and fails to stay sober or look after the couple’s baby. Judy does not heed the ticking-time-bomb energy of her husband, chastising him for his lapses in responsibility. One day, he does something accidentally awful, and compounds it with something criminally terrible.

From here, the genre bends from claustrophobic domestic drama to full-on fantasy revenge fable. Foulkes bides her time before dealing out retributive justice, drawing out the details of her deliciously dark world. There is absurd humour to be found in François Tétaz’s vaudevillian score, which underlines the very worst moments with brassy cheek. Adele Flere’s art direction establishes Seaside as a theatrically nasty town, contrasting it with an almost supernatural, earthy force emanating from the surrounding forest.

There are story arc comparisons to be made with French director Coralie Fargeat’s blood-soaked rape-revenge film Revenge, as both are geared towards providing a cathartic finale of a woman turning the tables on her male oppressor. While on one level Judy & Punch is that simple, its sophistication is found in Foulkes commitment to creating a layered and symbol-rich tone poem, synthesising all the elements of cinema to create a ghoulish ode to female ingenuity.

Mia Wasikowska is a magnetic screen presence who tends to make interesting choices.

A feminist subversion of the puppet-show that comes into its own as a delicious, dark and atmospheric fairy tale.

Leaves a pleasurable shudder running through your body.