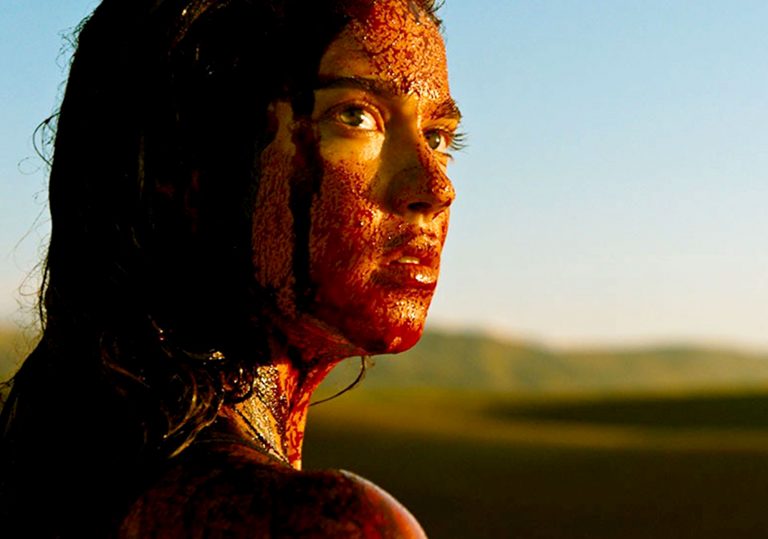 A feminist spin on the rape revenge genre? Sign us up!

A slick production, but not the subversive classic we were hoping for.

Made infamous by Meir Zarchi’s 1978 film I Spit on Your Grave, the rape revenge subgenre has occupied a particular niche in horror cinema for decades now. In the wake of Time’s Up and #MeToo, it seems only fitting that a female filmmaker should set about subverting this problematic area of cinema which sees women defined by the sexual violence they undergo at the hands of the patriarchy.

As such, Coralie Fargeat’s Revenge appears – upon first glance – a welcome tonic, purporting to reframe a woman’s story of abuse at the hands of a group of violent men as a feminist tale of empowerment. Things start off as they always do, with an attractive young woman, Jen (played by Matilda Lutz), travelling to a remote desert pad with her lover, a handsome, married with children French millionaire named Richard (Kevin Janssens).

Their romantic getaway is rudely interrupted by the early arrival of Richard’s pals Stan (Vincent Colombe) and Dimitri (Guillaume Bouchède), who join him for a hunting trip. When the lecherous Stan takes a shine to Jen, things quickly go south and our heroine finds herself in a world of trouble. But, as expected, the hunters soon become the hunted.

Revenge will inevitably be compared to its predecessors, and indeed Jen to the female protagonists of I Spit on Your Grave, The Last House on the Left and even Kill Bill. Yet while Jen is shown to have command of her sexuality, there’s very little sense of who she is beyond this. In an early scene she discusses her ambitions, which extend only as far as wanting “to be noticed”. Her body is a weapon – Fargeat hammers this message home – but it’s difficult to see how she is any different from the numerous underdeveloped female characters who have come before her.

This is a promising debut feature from Fargeat, with some impressive, gory practical effects and Robrecht Heyvaert’s crisp cinematography rendering the barren setting in dreamy shades of yellow and orange. The film’s triumph is its climactic scene, which plays out like a reimagining of Mary Harron’s American Psycho. But it’s not enough to justify 90 minutes of unremitting misery. Rather than breathing life into a stagnant subgenre, Revenge disappointingly offers more of the same.

A feminist spin on the rape revenge genre? Sign us up!

A slick production, but not the subversive classic we were hoping for.