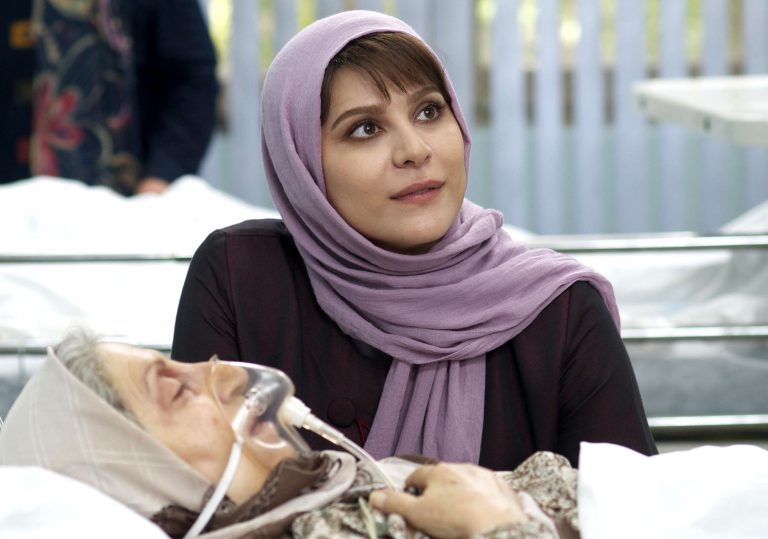 It’s not every day an Iranian film receives a UK theatrical release.

An exceptional performance from Sahar Dowlatshahi powers this character-driven drama.

A thoughtful meditation on female agency in contemporary Tehran.

A couple stare out at a metropolitan cityscape from the second floor of a derelict apartment block. “Our hazy Tehran,” one of them says wistfully, “this is the only city that I love.” Smog hangs thick in the air, bright headlights glowing through clouds of grey smoke. Behnam Behzadi’s captivating family drama, Inversion, portrays not only the polluted ‘thermal inversion’ of a city but also the inversion of a life.

Offering insight into the everyday realities of life in Iran’s capital, the film chronicles one woman’s struggle against the patriarchal forces threatening to suffocate her. Like many recent Iranian releases, this is a story set in middle-class Tehran, examining the generation gap and pulling astute social criticism from seemingly ordinary circumstances. What sets this film apart is its plucky heroine coupled with Behzadi’s investment in capturing the subtle strength of his female characters.

Niloofar (Sahar Dolatshahi) is struggling against the prejudice entwined with being female, unmarried, and on the wrong side of 30. She lives with her elderly mother Mahin (Shirin Yazdanbakhsh), for whom she provides round-the-clock care. When Mahin is taken ill with respiratory issues caused by the smog and is ordered to leave the city, Niloofar is faced with a dilemma. Should she accompany her mother to the countryside, disregarding her successful 10-year-old business and burgeoning romance, or stay in Tehran and alienate her family?

Niloofar’s struggle is brought to life through the enchanting wide eyes of Saba (Setareh Hosseini), her young niece. Emblematic of a new generation and a more progressive attitude, Saba looks up to her aunt as an example of liberation, and is forced to watch as men, under the auspices of tradition, trample all over her freedom. In this battle of wills, Ali Mosaffa offers up an incredible performance as the commandeering elder brother, Farhad. After he’s decided to send Niloofar away and has sold her business to pay off his own debts, she confronts him.

“I’m supposed to ask your permission?” he asks. “My opinion at least,” she implores, her eyes heavy with tears. There is a long pause. “What opinion?” he bites back. In this moment, we’re faced with the stark reality of Niloofar’s predicament: no husband, no opinion. The illusory freedom she’s spent her life cultivating falls quietly to pieces around her, and it’s subdued traffic jams, missed phone calls and hospital rooms that provide the backdrop for her battle.

This is a simple film, yet Behzadi’s dialogue-heavy, character-driven storytelling is never less than compelling. It’s no accident the film ends on an ambiguous note – the director leaving us with a gentle yet poignant reminder that Saba’s battle is not yet won. Despite the fact that Iranian women are more liberated than they’ve ever been, Inversion shows they’ve still got a long way to go.

It’s not every day an Iranian film receives a UK theatrical release.

An exceptional performance from Sahar Dowlatshahi powers this character-driven drama.

A thoughtful meditation on female agency in contemporary Tehran.