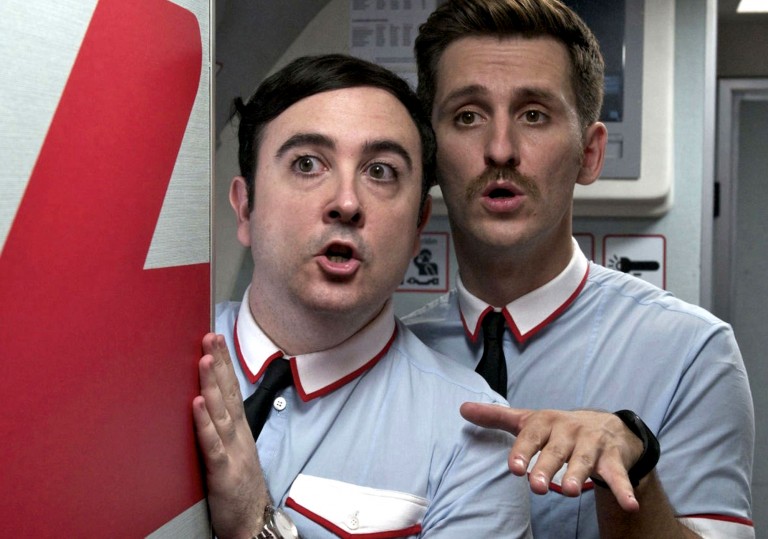 Almodóvar is and always will be a friend of ours.

A return to the director’s early, funny ones. For better and for worse.

An odd, gaudy comedy that’s great fun, but certainly one to file under ‘short haul’.

Pedro Almodóvar returns with a gaudy, mile-high sex romp that harks back to his trashy formative years.

In his flamboyant bad-taste punk debut Pepi, Luci, Bom from 1980, Pedro Almodóvar had his characters indulge in comic rape-revenge, enforced water sports and kinky outdoor penis-measuring competitions. The film was intended as an affront to authority, arriving in Spanish cinemas soon after the fall of the Franco regime and the puritanical conservatism and stringent media censorship that came with it.

Flash forward 33 years and Almodóvar is up to his old tricks. But while I’m So Excited might seem quaint when compared to the kind of cum-splashed, shit-flecked gross-out that makes it on to cinema screens these days, this triumphant return to the realm of the risqué feels like Almodóvar’s pointed attempt to combat a certain cosy sobriety that has infected his work of late.

I’m So Excited is deceptively disposable, a lewd existential comedy cabaret set on a doomed passenger jet that’s circling above Toledo awaiting clearance for an emergency landing. With fiery death an imminent possibility, the eccentric coterie of business class passengers (economy have been chemically sedated, natch) decide that this would be the time to ritually unburden themselves of their intimate, sexual longings.

If Broken Embraces was Almodóvar’s paean to the pursed romanticism of Douglas Sirk and The Skin I Live In his take on Georges Franju’s fixation with identity and masks, then I’m So Excited continues this run of cine-monuments to classic-era filmmakers.

The inspiration here appears to be Frank Tashlin, the director who began his career as a Disney animator and then went on to make jocular, innovative comedies with Jerry Lewis (The Geisha Boy) and Bob Hope (Son Of Paleface) alongside ribald pop culture satires Will Success Spoil Rock Hunter? and The Girl Can’t Help It. Tashlin’s vibrant aesthetic, dogged mischievousness, his sense of coiled cynicism and his wicked way with a song-and-dance number suffuse every frame of I’m So Excited.

It also suggests that while it may look like there’s a nincompoop piloting this metal coffin, the decisions Almodóvar makes are bolstered with a sly intelligence. The film also taps into the current vogue for burlesque and performance art, with the wipeclean interior of the cabin acting as a suitably mockable stage for the salty confessional that follows.

Even a little sortie out of the cabin, following a middle-aged actor (Guillermo Toledo) wanting to prevent his deranged girlfriend (Paz Vega) from suicide, appears to offer a subtly barbed depiction of primped bourgeois lifestyles, presenting a sun-splashed Madrid peopled with tattooed hipsters on push bikes and strange serendipitous meetings made possible via shiny smartphones.

Occasionally, the humour even tips over into the potentially distasteful: Lola Dueñas nutty psychic Bruna is upset that she’s set to die a virgin and so attempts to court the sexual attentions of her fraught co-passengers. Her blanket rejection then leads her to skulk into coach class, where she opts to have her wicked way with a quasi-anesthetised hunk. It’s hard to judge how this ‘joke’ is supposed to be taken: as straight-up provocation; as a comment on death anxiety and the depravity it invokes; or a light-hearted encounter in which no party suffers any physical harm.

Either way, the ambiguity of tone makes it tougher to enjoy the film on its most basic terms. Photographically, Almodóvar does his best in this extremely confined and bland space, but the assiduous classical compositions and fluid camera movements of yore are mostly a no-show. There’s even something of a light sitcom vibe to the look of the film, and corny as that often is, it does make for a neat fit with the knowingly trashy material.

And then from nowhere, Almodóvar mounts a sensational, atmospheric montage of an empty airport to work as a visual shorthand for the landing of the plane (which is not shown on screen). This curt montage offers a bracing counterpoint to the pastel-hued, mile-high larks.

Yet come the final reel, Almodóvar reveals the film’s dark heart. It’s hard to expound any further without spoiling the plot, but suffice to say all the events in the film are deliciously inverted in one swift flick of the wrist. The final shot sees a crew member rolling around in a carpet of churning, pearly-white foam. How appropriate.

Almodóvar is and always will be a friend of ours.

A return to the director’s early, funny ones. For better and for worse.

An odd, gaudy comedy that’s great fun, but certainly one to file under ‘short haul’.