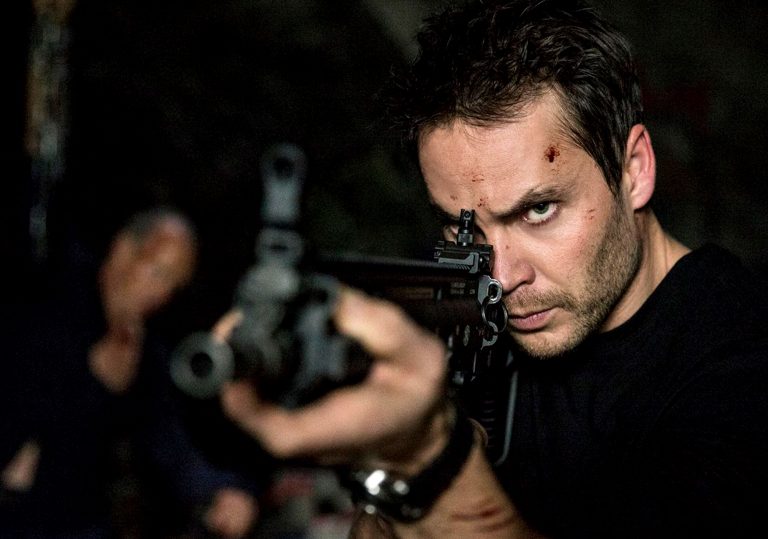 Dylan O’Brien has always been great, and the rest of the cast is promising too.

Way sillier than expected, but the action sequences are enjoyable and the hysterical tone is amusing.

Quite boring in the end – a fun time at the movies, but not one we’ll remember.

A strong performance by Dylan O’Brien can’t save this reactionary and very silly revenge flick.

As proto-fascist, reactionary Hollywood action films go, American Assassin is mercifully not the most distasteful of recent examples. Unfortunately, this isn’t due to any incursion of liberal ideas into the mix, but solely to incoherent storytelling. What slender value the film does have has little to do with its story or political message.

The film opens as handsome hunk Mitch Rapp (Dylan O’Brien) proposes to his winsome girlfriend Katrina (Charlotte Vega) on a beach in Ibiza. Despite the total bliss that the couple are experiencing there is something in the unsettlingly saturated look of the image that suggests a sense of impending violence. Sure enough the sequence ends in gruesome bloodshed as a group of heavily armed terrorists attack the tourists. This hysterically overwrought sequence reaches a point of delirium when Katrina is killed right in front of Mitch while he is miraculously spared.

This opening sets the tone for the remainder of the movie, an angry and unusually nasty revenge flick which only checks its furious rage a few times for good measure. Back in America, Mitch trains intensely in martial arts skills, learns how to shoot guns and kill with all manner of weapons, and even teaches himself Arabic. This is all in order to infiltrate the terrorist cell behind Katrina’s death. When Mitch finally meets face-to-face with the man responsible for his girlfriend’s death and prepares for revenge, the CIA suddenly swoops in and kills the terrorist themselves, taking away from Mitch the one thing he has been training for and looking forward to for months.

Initially appearing as an instance of the American government discouraging vigilante justice and blind, emotional hatred for the enemy, we quickly realise this is far from the case. CIA counterterrorism chief Irene Kennedy (Sanaa Lathan) instead considers Mitch – a man so dedicated to revenge that at 23 years old he has already trained for months in the art of murder – as having “the perfect psychological profile” to join her special unit of killing machines.

This is where the film leaves the realms of the real for good and becomes much more enjoyable as a fantasy genre exercise, a display of muscles and cinematic violence. The presence of Poirot himself, David Suchet, as the director of the CIA furthers this impression and the film only gets sillier from there on in, its politics becoming quite irrelevant in comparison to its sense of nasty fun.

Mitch joins a training camp led by sadistic ex-Navy SEAL Stan Hurley (played with intensity by a pouting Michael Keaton) and engages in all sorts of gloriously over the top and entirely humourless exercises. These are genuinely fun to watch, coming as close to the bloody training sequences of Starship Troopers as a straight-faced movie can.

A real highlight is a mind-blowingly neurotic virtual reality training session where Mitch must resist the temptation of shooting at a hologram of the terrorist who killed his girlfriend. Coming straight out of the Mark Wahlberg school of acting, O’Brien has an undeniable resemblance to his Deepwater Horizon co-star, from the haircut and shirt to the accent and facial expressions. However, his more realistic body gives a real edge to the character that Wahlberg’s appearance of a bodybuilder cannot.

The only thing that Hurley really has to teach Mitch is that though he is angry at those who killed his girlfriend, he must never let it “get personal” when in the field. Mitch absolutely, 100 per cent does not manage to learn this. But because of his resolve and self-taught physical abilities, he is assigned to find whoever stole massive quantities of plutonium from a Russian facility, alongside another CIA trainee (Scott Adkins) and Turkish agent Annika (Shiva Neggar).

Traveling across Europe, the team tracks the various people related to the missing bomb component. Cinematographer Enrique Chediak brings out the beauty of every setting, which makes the nastiness and ridiculousness of proceedings stand in rather amusing contrast. Indeed, the film slowly but surely abandons all pretence of being a serious political thriller. One deliciously simplistic narrative twist straight out of a Brosnan Bond film has the team track the man who owns the bomb detonator, until they make the connection with ultimate villain “Ghost” (Taylor Kitsch).

Kitsch and O’Brien occupy the same category of white, American, beefed up action actor. Here they play essentially the same character. Also trained by Keaton’s Hurley, Ghost is similarly motivated by vengeance, and has long given up on trying not to let it “get personal.” Though this is one of those classic situations where the villain and the hero are on two sides of the same coin, Kitsch’s performance is almost indistinguishable from O’Brien’s, and there is no sense that one character is more insane or evil than the other.

The movie gets a little lost trying to justify his being the only bad guy and the final dramatic showdown suffers from this confusion in a way the film’s other action sequences do not. Enjoyably slick, genuinely tense and well executed, most of this silly, throwaway film is carried with conviction by O’Brien, a talent worth watching in literally any old toss.

Dylan O’Brien has always been great, and the rest of the cast is promising too.

Way sillier than expected, but the action sequences are enjoyable and the hysterical tone is amusing.

Quite boring in the end – a fun time at the movies, but not one we’ll remember.