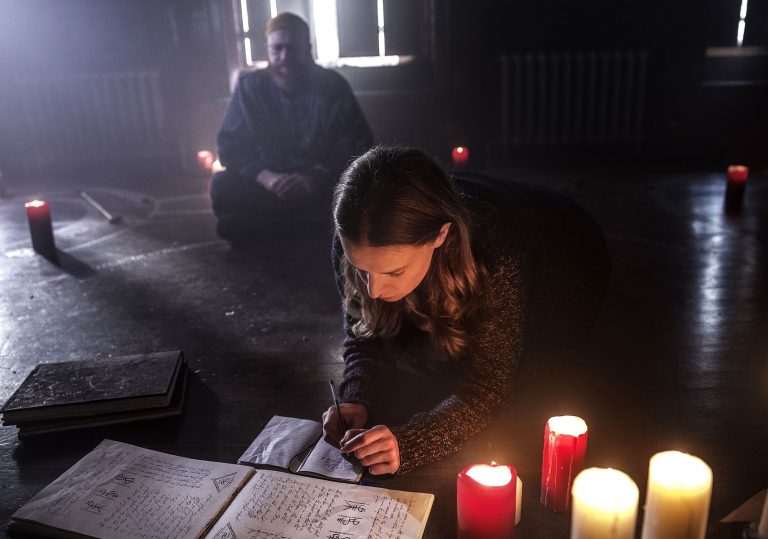 Another occult film toying with black magic – haven’t we seen it all before?

An artful film with psychological insight, even if the CG-heavy finale doesn’t quite hit home.

Everyone deals with death differently, but it’s safe to say that not everyone would choose to seek help from an alcoholic occultist. After making a strong impression with his short films, director Liam Gavin goes all out for A Dark Song, and intense chamber thriller that offers a conceptual take on occultism.

The film’s stripped-down visual style amplifies its already moody tone as bereaved mother Sophia (Catherine Walker) seeks out antisocial, boozy black magic practitioner Joseph Soloman (Steve Oram). Her hope is that he will connect her with her guardian angel, and in turn enable her to communicate with her dead son.

The pair take refuge together for a number of months in a remote manor house. They are cut off from society and quite possibly reality. In order for the ritual to work they must adhere to a set of strict rules, which includes Sophia obeying whatever her enigmatic accomplice tells her to do. For the magic to work they are also not allowed to leave the house – or rather the circle of salt poured around it – for the entire duration.

A Dark Song works almost as an open manual to occultist traditions, while also exploring themes of domestic abuse, alcoholism and depression, which lends the story satisfying depths. Although things get pretty graphic at certain points, the mental strain of the characters as they struggle, both physically and psychologically, to reach the end of the process is what makes the film so affecting.

Oram can add this performance to his list of ominous yet darkly humorous roles, following his quaint manic in Ben Wheatley’s 2012 film Sightseers. As (almost) the only two characters in the film, Oram’s Joseph and Walker’s Sophia are rendered so truthfully that it makes it even more shocking when everything they have built together is quickly torn down as the film reaches its climax.

Another occult film toying with black magic – haven’t we seen it all before?

An artful film with psychological insight, even if the CG-heavy finale doesn’t quite hit home.