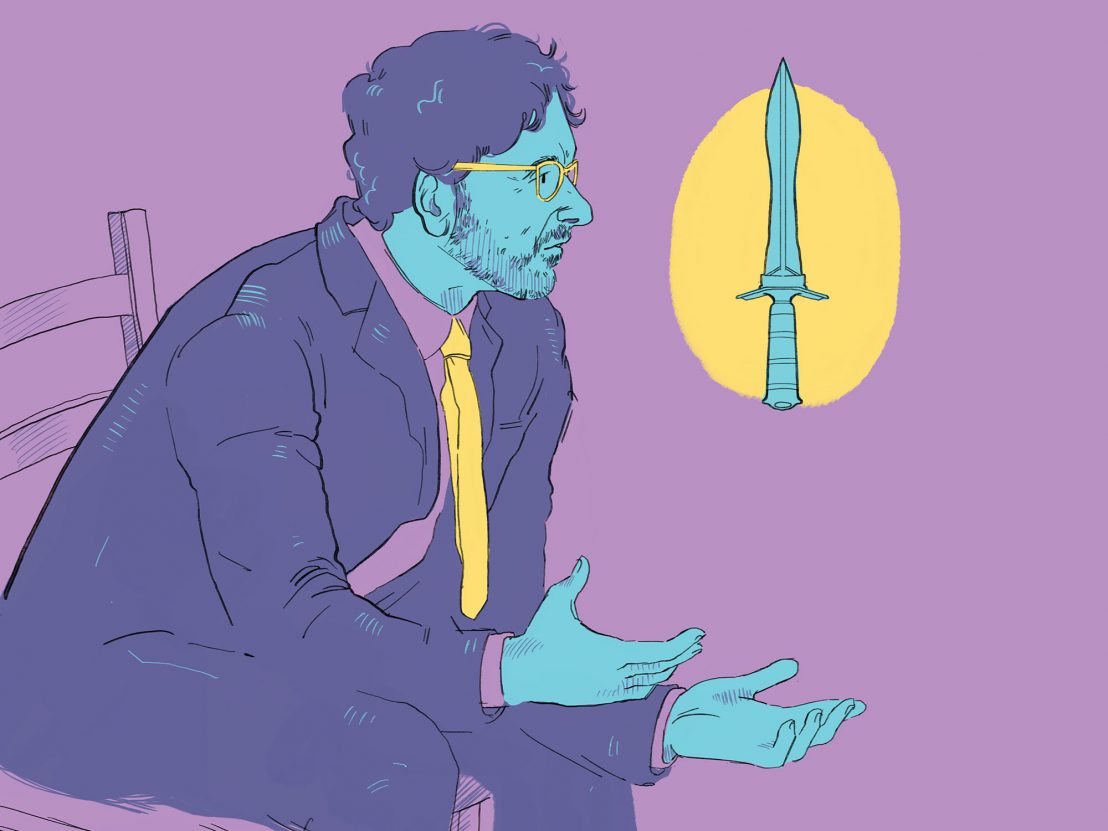 The director and his team relay the secrets of breathing new life into one of the most hallowed texts in all of history.

For his first solo mission away from his brother and creative partner in crime, Ethan, Joel Coen has decided to offer up his version of the most scared text in the history of drama: Shakespeare’s ‘Macbeth’. This expressionist monochrome fever dream has Denzel Washington as the Thane of Cawdor and Frances McDormand as his violently manipulative other half. Here, Coen and a clutch of below-the-line collaborators explain how they were able to pump new blood into this canonical tale.

Joel Coen, Writer/Director: “I’m not a Shakespeare guy. I’ve seen lots of Shakespeare over the years. I’ve seen lots of productions of ‘Macbeth’. I’ve read a lot of Shakespeare, but it’s not really my background. One of the most interesting things about The Tragedy of Macbeth was the idea of taking a very deep dive into a particular work. I spent a lot of time with friends of mine who do know a lot about Shakespeare, asking them about the production history of the play and all the productions that were done on film. I was interested to see in what ways the play had been edited, because the ambition of this particular project was really to give it a rhythm and a pace that was very, very relentless. You can really get into the weeds on all of this stuff.”

Stefan Dechant, Production Designer: “From the beginning we talked about wanting the imagery to be very abstract. We discussed what German Expressionism had meant for filmmaking, and how it influenced people like Charles Laughton when he was making The Night of the Hunter. We looked at Carl Dreyer and FW Murnau, and we also looked at Hiroshi Sugimoto’s photographs of architecture, and Casa Luis Barragán in Mexico, which is just two slab walls and a square tower. Joel was immediately saying ‘I think that could be Inverness’. That then led us onto a conversation about a 20th century theatre designer named Edward Gordon Craig, who created these very abstract, geometric designs. That was just our first conversation.”

JC: “I saw the Orson Welles version and I think it’s a very interesting movie but it was a very stressful movie for him. He was trying to prove that he could make the movie on schedule and budget, ’cause he had this reputation, and so there are things in it that are fast and sloppy. I think it’s one of the most bizarre exercises in costume design I’ve ever seen; he does some very weird things in terms of combining and editing and inventing new characters. So in terms of influences or inspirations for this film, there’s a little James Turrell in there – although not really consciously – and some Sugimoto. We looked at a lot of Dreyer, and Murnau’s Sunrise; not so much the Germanic stuff, more the exteriors, the fields and the swamp.”

Bruno Delbonnel, Cinematographer: “Dreyer was the main influence, for me at least. It’s about the simplicity of the set. What is so amazing about The Passion of Joan of Arc is the way he frames everything. Dreyer simplifies everything to show how powerful the English Church was against Joan of Arc. She has lost, basically. She has lost the battle against the Church. And the close-ups are extraordinary. That pushed us towards the Academy ratio, especially with the very powerful cast we had. The first close-up we did on Denzel Washington was just like, ‘Wow, that’s power!’”

“There are a lot of romantic relationships in Shakespeare, but ‘Macbeth’ is the only good marriage. Okay, they happen to be plotting a murder, but it’s a good marriage.” — Joel Coen

JC: “A motivation for making this film was imagining the play with older protagonists than you usually see. Also, there are a lot of romantic relationships in Shakespeare plays, but ‘Macbeth’ is the only good marriage. Okay, they happen to be plotting a murder, but it’s a good marriage. Putting it in that context was interesting, and that’s really why I wanted to work with Fran and Denzel. I just hadn’t seen it quite talked about in that way before. It was a reflexive interest, too, because if I was going to do it with Fran, and Fran was interested in doing it, it was going to be about all the characters.

“She is old, just like I’m old, and because I’m old and she’s old and she wanted to do it, it then became about that. Time, immortality, those are themes that appear in other movies that I’ve done with Ethan in the past, but they’re also a huge part of ‘Macbeth’. Shakespeare uses the word ‘time’ maybe 40 or 50 times. It’s the obsession of the play. So I was interested in that aspect of the central relationships, and the pulp noir aspects of the story.”

Mary Zophres, Costume Designer: “I’ve done one other black-and-white film before [The Man Who Wasn’t There] and learned quite a lot from that. The most important thing is texture: how certain materials react differently in black-and-white as opposed to colour. Another thing I learned was that using lots of different medium tones can create depth in a good way. If you have a crowd of people and you use different shades, it adds more dimension. Before we made a single garment, we realised that it would be better if everything was sort of easy on the eye. In other words, I wasn’t going to use a magenta or a purple on the thanes or some of the soldiers. Once we came up with a set of rules for what the characters were going to wear, that became the template for the rest of the movie.”

BD: “We shot in colour, which was then converted to black-and-white, but all the sets were black-and-white. I asked for the set to be painted a certain type of grey, and the same with the costumes – the wigs and everything – so that I could balance the skin tones of the actors against the set and costume designs. The sets have almost no texture, so the idea was to give more presence to the actors through their costumes. We worked out the blocking and the framing of every scene two months before we started building the sets. So for a very simple scene like when Lady Macbeth burns the letter and then goes onto the balcony and lets it go, we knew how we were going to block it, the exact movement and perspective we wanted, so we designed that room and the balcony around that.”

SD: “After our first meeting, I said to Joel that the best way to design this movie is digitally, using 3D models. That allowed us to move very fast. We were able to lay out all the sets and start thinking about how they would be lit. Very early on we started getting into these sets from a digital point of view, and we started applying shadows and grading the walls so they would fade into darkness. The castle was designed to be a cauldron of madness.”

MZ: “Joel wanted the movie to look old, but we never had a specific time period in mind. We also decided it should have an organic feel to it. That’s how we ended up landing on leather being the material of the armour. Then it was a case of trying to give it more depth. So we came up with this idea of lattice work – we used a warp and weft technique, almost like how they would have made cloth in medieval times. The under armour for Macbeth and the other soldiers is made out of a very textured linen cotton, which we quilted in vertical channels and tufted in a diamond shape. The idea of geometric shapes became important very early on.” 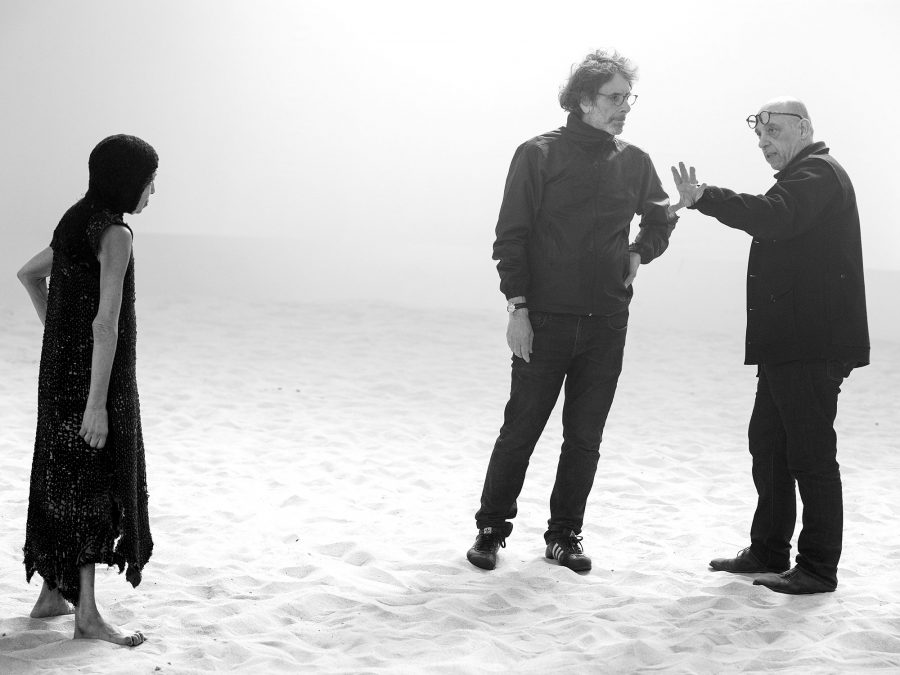 JC: “The movies that I made with Ethan, it was impossible for us not to be very specific about the location and the landscape. The ambition of Macbeth was a little bit the opposite of that: It’s not 12th-century Scotland but some generic past where these things could happen. It wasn’t about having any real fidelity or defining the time period or the location in a concrete way. That was a strange exercise for me because it was so different from the way I usually think. But in the context of the play it made sense and it made it less difficult. We were trying to make a play as a movie, as opposed to a movie movie. In theatre, everything is abstract. If you have a room and there’s a piece of furniture on a stage, it can be anything so long as it represents how the room is supposed to be furnished.”

SD: “To go back to The Night of the Hunter, look at the scene where Robert Mitchum is standing out by the light post and the kids are in their bedroom – the graphic of the mountains behind them is so simple. It makes no pretence about being artifice. That’s where we wanted to get to with this movie, to have no pretence about the artifice of it. For me it was about reducing the imagery to its simplest form, to the point of near-complete abstraction.”

BD: “We also talked a lot about haikus, where three phrases describe the whole world. We took everything right back to basics. What is a room? A room is four walls. How many windows does it have? One? No windows? A corridor is a corridor – it’s just that. When it came to blocking the actors, we thought a lot about creating rhythm with light. For example, when Macbeth delivers his “Is this a dagger which I see before me?” soliloquy, the rhythm of the light and shadow supports his movement and his words. It’s like music, in a sense.”

MZ: “I’ve worked with Fran before so I knew what worked on her. There were some processes of elimination but we came up with this shape that we thought would work on her. We did something similar with Denzel, creating an inverted triangle shape to give him broad shoulders and a nipped waist. For the shape of Fran’s cape, Elsa Schiaparelli was someone I looked at. We wanted something that felt timeless and looked good in silhouette.”

JC: “Editing the original text was an interesting process. I wanted the language to be there, I didn’t wanna dumb the play down, but in all of Shakespeare there’s this beautiful poetry and then there’s a lot of embroidery in the poetry. Sometimes the embroidery is the most beautiful thing, but modern audiences who aren’t used to listening to Shakespeare can get lost trying to decipher archaic parts of the language. So that’s pretty much what went out. I wanted to make the movie not just for people who knew the play well, but for people who’d never seen a Shakespeare play. Period.”

The Tragedy of Macbeth is now available to stream on Apple TV+. Read the LWLies Recommends review. 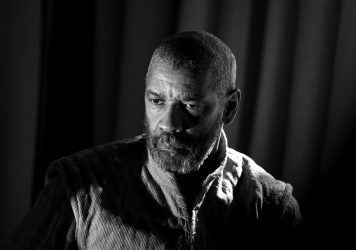 The Tragedy of Macbeth

Denzel Washington and Frances McDormand take on the most infamous power couple in literary history, care of Joel Coen.