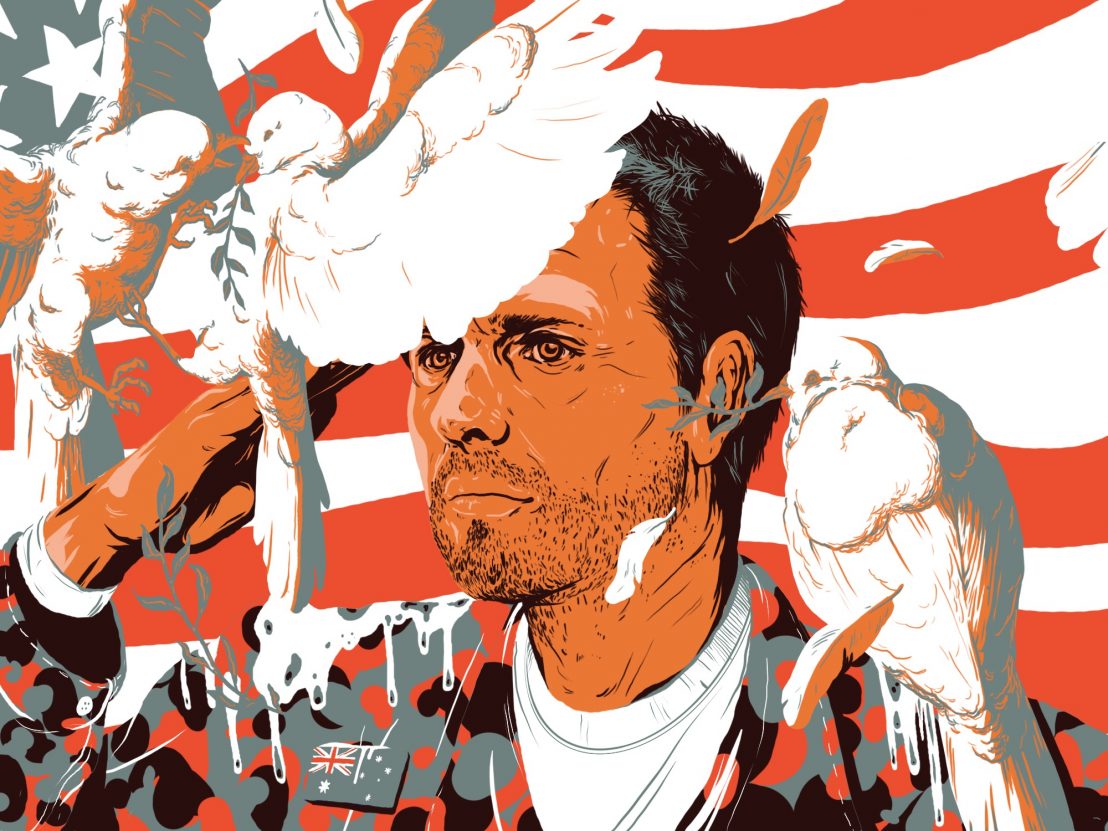 Australian director David Michôd burst onto the international film scene in 2010 with his searing debut feature Animal Kingdom, a by turns shocking and thrilling look at Melbourne’s criminal underworld. He followed that up four years later with the similarly hard-hitting post-apocalyptic road movie The Rover.

His third film, the Brad Pitt-starring War Machine, is an altogether different prospect. It tells of a powerful US General’s flawed counter-insurgency efforts during the Afghanistan conflict, and is refreshingly even-handed in its critique of the opposing forces and systems that in turn support and oppose America’s military. We spoke to Michôd recently about the challenges of making a military satire from an outsider perspective.

LWLies: War Machine is a film about America, but you’re Australian. How was it for you to make a film about another country?

Michôd: Australia being an English-speaking country, we grow up with American culture, and with British culture too. My cultural initiation into America has kind of been happening, in a way, since I was a little kid. The thing I needed to ask questions about was the minutiae, the workings of the military world. But there’s a long history of outsiders making movies in and about America, especially after World War Two, with whole generations of filmmakers coming from Europe.

This movie isn’t just about America but about American militarism, and there’s something about being Australian that means that we have a view of America that is more global, but we’re also intimately connected to the American military machine. We’ve fought alongside America in every major conflict since World War One: we were there in Korea, we were there in Vietnam, and we’ve been there in all these various incarnations of the Middle East conflict. It’s not my perspective necessarily but the perspective of those countries that let themselves be dragged around militarily by the American war machine.

What moral questions did you face when you decided to make a satirical movie depicting war?

For a number of years I had been looking for a way to make a movie set in one of these theatres of war, such as Iraq or Afghanistan, and was having trouble finding one that I wanted to make. The stories that I was contemplating were so dark, they felt very unpalatable. When the production company brought this book to me, I suddenly saw a way in. The thing that struck me when reading it was the wild, absurd disconnect between the upper levels of command to the war on the ground. It was at that point that I started to see the film in terms of satire.

But I still wanted the movie to be about the horrors of war, so I started getting really excited about the idea of making a movie in which that absurdity and that horror existed together. I never really had any questions about my need to tread carefully in a moral sense as a filmmaker because America has a long and rich tradition of war satire. But that tradition has been asleep for quite a few years, and I’m not entirely sure why that is. I think it has something to do with America’s relationship with the wars it is fighting. The elephant in the room is that if you acknowledge openly that these wars are a folly, then it kind of makes the sacrifice of lives indefensible. And those two things are irreconcilable. It’s unsurprising therefore that as a way of assuaging its guilt, America treats its military with unquestioning reverence.

War Machine takes place during the Obama era, but obviously now the situation is different with Trump in charge. Do you think you would have made the film any differently now?

Not necessarily… I mean, I think one of the defining characteristics of Trump is that you don’t really know what he thinks, you know? He’s made intimations in the past that he has a more isolationist view of America, that he doesn’t want to have endless military engagements in different parts of the world if he doesn’t see it as being in America’s interest. But it’s just as likely that the opposite could prove to be true. It’s frighteningly conceivable that he will do something reckless and catastrophic… People have said to me that the movie is very timely, but it’s been timely for 16 years!

The film is based on journalist Michael Hastings’ account of how he managed to force General Stanley McChrystal to resign. How much did you stick to his version of events?

The film differs from the book in a key way. The book is written by Michael Hastings and is about his experience following Stanley McChrystal around. I never wanted the movie to be about a journalist, I wanted it to be principally about a general, but actually about the whole of the military machine. If anything, my first impulse was to have it so you don’t even notice the journalist; he’s like a mosquito that brings down the elephant. But I realised that in a movie as crazy as this one – that is juggling both absurd, almost goofball satire, and the trauma of the battlefield – I needed that journalist’s voice to give the film a through line.

Do you think that people outside of politics, like journalists or filmmakers, have the power to change the world?

I don’t know if individuals do, but I would like to believe that the cumulative effect of keenly felt opinions expressed powerfully has some impact on the way the world turns. But who knows! If anything has changed since November 2016, it’s not so much to do with the way the military functions, but the way information is consumed. As much as I’d like to believe that we have a power as journalists, as filmmakers, as artists, to change the way people think, I think what’s happening now is that people have no idea how to think. If you’ve got a person constantly telling you that long-standing, robust institutions of the mainstream media are somehow all “fake”, eventually you just stop believing anything. Everything starts to seem fake. When your leaders lie to you all the time, it’s not necessarily that you start to believe their lies, it’s that you stop believing anything.

War Machine is on Netflix from 26 May. Read our review here.