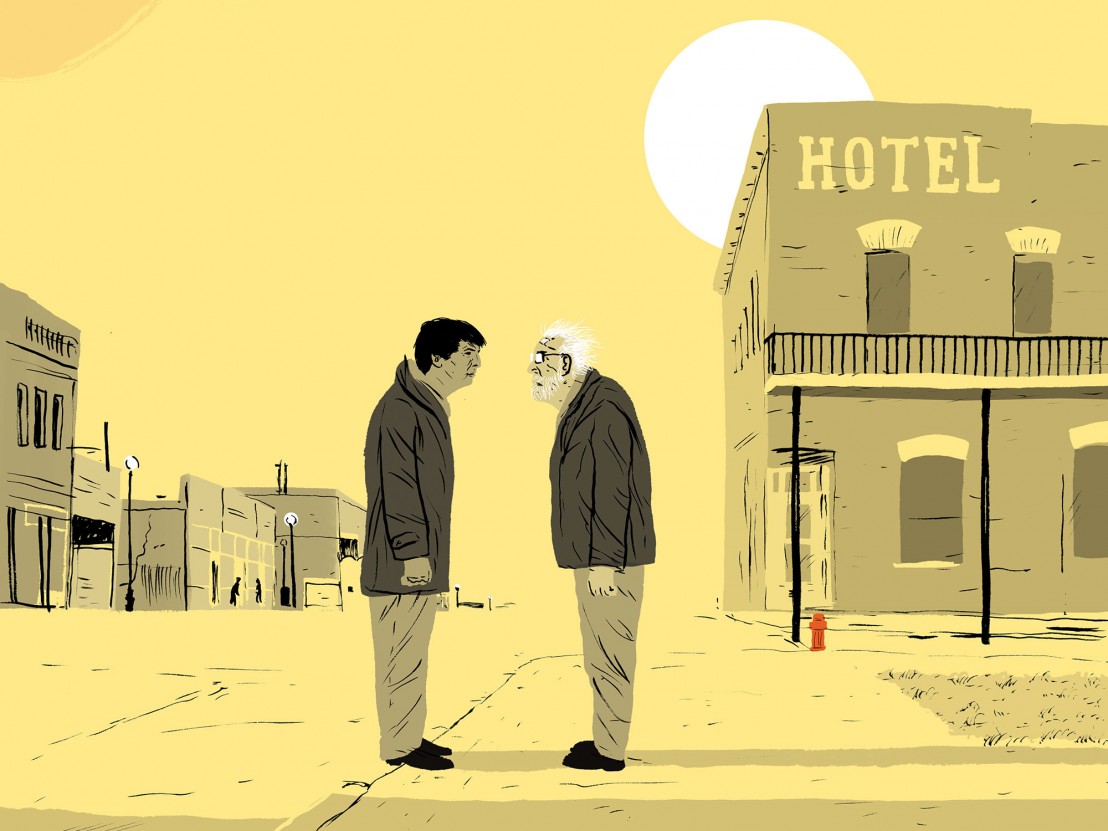 Chapter one, page one: ‘I think paradise can go fuck itself.’ “That line made me want to do this film,” Payne says, letting the book fan shut. In Payne’s adaptation, that line is grumbled by George Clooney’s protagonist in an opening voiceover that’s overlaid with postcard shots of Hawaii – white beaches, tall surf, swooning palms. It’s a caustic sentiment that’s indicative of Hemmings’ tone, one that resonated with Payne and his long-term writing partner Jim Taylor, the moment they first read the book.

That was back in 2007, three years after Payne achieved indie immortality with his fourth feature, Sideways. Considering the success of that film, it’s fair to ask where Payne has been all this time. Granted he admits that finding source material that’s ripe for adaptation is “a blue moon occurrence”, but seven years away from the game feels like an ill-considered break. And not one he can readily explain. “I got into this game to direct features and I was surprised, as apparently some of my viewers are, that it’s been seven years between releases.”

So what’s Payne been up to since Sideways? Well, he directed a segment in Paris, je t’aime in 2006; a TV pilot the following year; has taken three producing credits and doctored a couple of scripts while developing a few of his own. Not a break exactly, then, but hardly the soapbox his vibrant artistic timbre merits. The silver lining is that while Payne will accept a quick pay cheque to give Jurassic Park III teeth, or freshen up I Now Pronounce You Chuck & Larry if it means helping to fund his next venture, he regards his feature films as the cornerstone of his creative integrity. Indeed, the brunt of that downtime was spent writing an “epic sci-fi movie that on a technical level will have a much bigger budget, special effects, that kind of crap.” Sign us up. But hang on, Payne doesn’t sell out, right? So what’s the deal? “It’s the same sensibility as my previous work, just on a much bigger canvas. It’s a tricky one to get financed, but I’m not about to compromise on it. I will never direct for The Man,” he declares triumphantly.

As we talk, Payne is scribbling furiously into a small notepad, the kind cops use at the scene of a crime. He’s logging details of our conversation – names of films, dates, people and places that come up both on topic and in tangents. Busy hair and devil-may-care moxie aside, Payne has a measured, erudite air. Perhaps it’s not the case, then, that he’s had trouble getting green-lit since Sideways. Perhaps he’s had a game plan all along. “Thing is,” he says, “I think people should speak only when they have something to say. I love the act of making a film, but I don’t want to make a film out of nothing or about nothing. And screenplay ideas, at least for me, have been very precious and not super common. I don’t have a stack of things I’m dying to make. I wanna make a whole bunch of films, but all in good time.”

The Descendants looks set to be the fourth Payne film in a row to make money, not much by Hollywood standards, but a profit all the same. Despite this solid track record and the fact he’s never gone over budget or over schedule, does Payne ever feel under pressure to perform? “Of course, but you can’t ever let the fear stifle you. My obligation to the studio is to be honest and to tell them, at all times, what I think a cool movie would be. My job is to see things that your research studies and your financial models cannot see. So far I’m not doing too bad. I guess I have X-ray vision.”

One thing that’s allowed Payne to maintain his virtue is the fact that he doesn’t belong to any Hollywood clique. He could do, were he that way inclined, but his fondness for his native state, Nebraska, and his hometown, Omaha, ensures that LA will never win out. “More of my time is my own in Omaha because the mechanics of urban living don’t take as long; to go grocery shopping, see friends, stumble home drunk from a party. I have time to think and to noodle. And also Omaha is just blossoming culturally and becoming its own form of a cosmopolitan place. It’s very exciting not just to witness that but to be a part of it, also.”

While Sideways and The Descendants have taken Payne to sunnier climes, he’s still characterised as a ‘Midwest filmmaker’, despite not having shot there in 10 years. Yet he’s looking to return to the great frontier plains of his earlier films for his next, the somewhat literally titled Nebraska. Rumour has it that Payne is actively trying to tempt Gene Hackman out of retirement to play the lead role in what he describes as “a father/son road trip movie.”

Sounds like a strong enough incentive to pick up where 2002’s About Schmidt left off and go local. Still, Payne’s not ready to settle long-term just yet. “The style of your film is often determined by the country you parachute into, and it just happens that the world I live in is a fertile and diverse one. But I’m curious to see how making a film in, say, Europe would turn out. I’ve always said that I want to keep on seeing the world through film, which I guess is why I’ve tended to be quite nomadic. Film can be a wonderful magic carpet, but right now it’s time for me to go back home.”