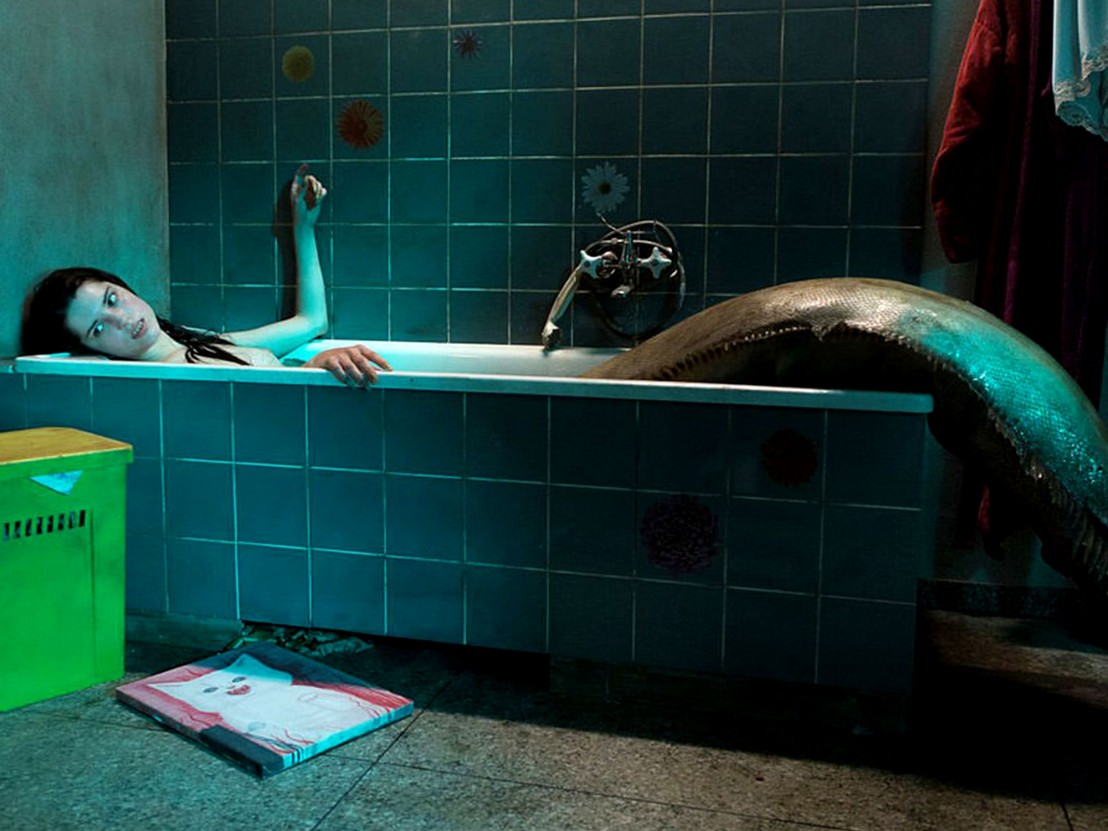 If movies have taught us anything it’s that mermaids are unquestionably delightful creatures. They bat their long lashes, pine for brave male saviour to spirit them from their briny prison, and ascribe to any number of negative female stereotypes. A new Polish film, entitled The Lure, arrives with the sole aim of assuring its audience that mermaids can be nasty if they want to be. They don’t just sit there and smile with giant oyster shells covering their particulars. And they sure as hell don’t need men to do their bidding for them.

Agnieszka Smoczynska’s film, which screens at the 2016 Melbourne Film Festival, is a grotesque and gory corrective to family favourites such as The Little Mermaid and Splash. It opens with a man quietly strumming a guitar on the edge of a lake, his unwitting siren song summoning two female-fish hybrids to the shore. They are exotic, alluring creatures, and he feels pangs of sexual desire when he first lays eyes upon them. Luckily, he plays bass in a nearby erotic cabaret house band, so he convinces his seedy boss to bring these strange sisters into the commercial fold. It’s not long before they are the star attraction, revealing their strangely elongated fins while lounging back in a giant champagne glass. And all this before any of the real craziness starts.

While The Lure might come across as a grungy feminist horror fantasy, with empowered women (and fish women) socking it their male oppressors, it is first and foremost a musical. It’s like Stephen Sondheim’s Sweeney Todd has been channelled through a Euro-centric electroclash revival, as characters play along to the action with synth drums and keytars, wailing about their endless pain and boredom via emo-inclined indie lyrics. It’s not wall-to-wall singing, but it’s certainly no half-hearted attempt at a pointless genre mash-up. Smoczynska and company have clearly put an amazing amount of time and effort into this endeavour, and while watching it’s rare that you feel the easy road has been taken.

With all these stylistic elements tossed into the pot, The Lure is not a movie to satisfy those who need a clearly defined three-act drama with credible plot twists and logical transitions from scene to scene. The film is more like an extended montage with a very, very slim storyline hiding just beneath the surface. The sisters’ mood swings, their constant shape-shifting and their insatiably lust for blood are what gives the film its forward momentum. They are taking on the world, reacting to it, enjoying it, and sometimes attempting to break it to pieces.

The slick, neon interiors of the club offer a visual counterpoint to the ramshackle apartment in which the sisters live, and the film takes great glee in having its characters move between a variety of different spaces. The music, too, runs the gamut between an opening Donner Summer cover and a nu-metal stomper in which our heroines bounce around on a stage while wearing black facepaint. It’s a movie that happily prizes style over substance, but, like its subjects, at least it’s always willing to adapt in order to survive. It’s a defiantly unique work, and Smoczynska always appears ready and primed to push the envelope as and when she needs to. Would this have been just as effective as a 20-minute short? Probably. Yet genre heads will likely prefer this in its longer, wackier package.